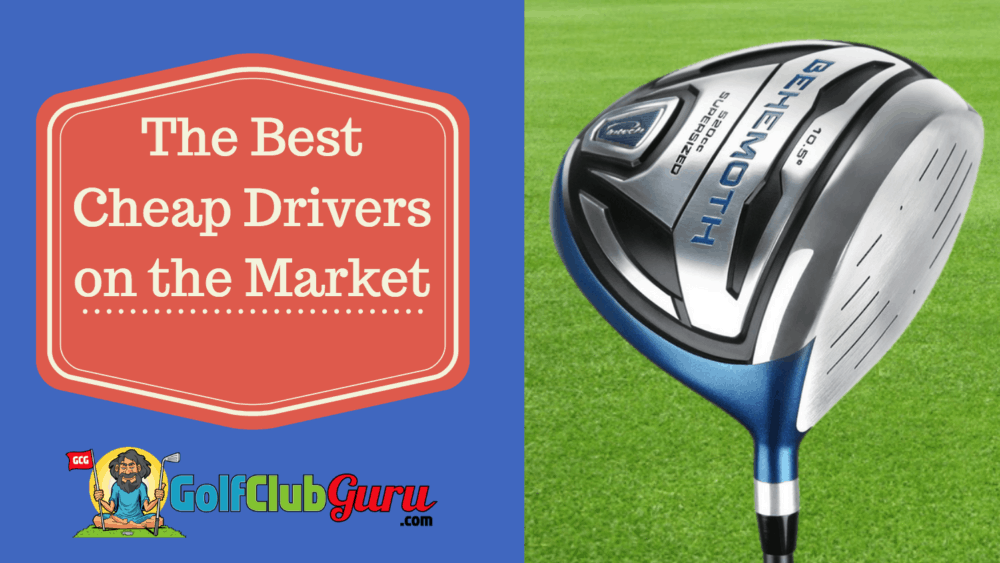 The Best Cheap Golf Drivers on the Market

Alright, so you want a cheap driver. You also want a long driver. You want a driver that performs just as good as the $400 ones. You don’t want to spend more than $100. Heck, you really want to spend less than $75. I know the feeling.

You want a driver that is going to hold up for many years, not having the head fall off after one year. That would be a waste.

You want a driver from a top brand, because you know they are reliable and trustworthy, and you know the driver will last you 100’s of rounds.

Problem is, you can’t get all of that for less than $100. Let’s be real. You have to compromise somewhere.

Where do you compromise? You want everything to be perfect! Well, you have to prioritize.

Would you rather spend a little more and get a higher quality driver? I’d suggest a TaylorMade, Cobra, or Callaway driver for you. Pick one that was released anywhere from 2-10 years ago.

Do you not care about quality as much, and just want a driver that will get you through the 5-10 rounds you play each year?  You need to be looking for a driver that has great reviews, but costs not much more than $50

Do you want the longest driver on the market? Or maybe the adjustable one that costs a little more? You need to decide now what you want, and what you are willing to sacrifice on.

Looking for ways to save the most money possible when buying a cheap golf driver?

Alright, let’s get to the best cheap drivers on the market!

If you want a cheap driver, I’ll show you a cheap driver. This PineMeadow Uno is the lowest price driver that I would recommend, and I hardly even do that. I think if you are going to shell out money for a club, you might as well buy the best value clubs that you can afford.

With that being said, if you can only afford this club, then it will do. It will get you around on the course. It is not a super high quality driver, so don’t expect it so perform or feel like one.

Shots will feel kinda rough, and you might hit some wayward shots at times do to the lacking overall consistency of the driver.

However, if you are new to golf, it will be completely fine for you. It’s a good club to learn the game on.

That way, if you decide golf is not for you, you didn’t waste too much money on it, and you can always use it when you decide to get back on the course for fun.

This driver is a great one for complete beginners. Most beginners tend to slice the ball, and this club does everything it can to stop that.

By having what is called “offset”, the club face is encouraged to close in the downswing, leading to a closed club face, as opposed to an open one that causes a slice.

It also puts the hands slightly more forward at contact, which helps you not flip at the ball and “guide” or “help” it in the air.

Overall, if you are not a beginner, I would not recommend this driver at all. You need to be playing with a driver with no offset, because your technique doesn’t require it.

PineMeadow, as you can probably tell, is a very cheap brand. They have released a lot of drivers in the past 5 years, and they are all geared towards new golfers. So you can be sure that they are doing whatever they can to make this driver as easy to hit as possible.

The reviews so far have been very good, leading to a lot of long, straight shots. However, the club head might break after a year or two, depending on how often you use it, so keep that in mind.

The Longest, Cheap Driver on the Market- InTech Behemoth

If you want distance at a cheap price, consider the InTech Behemoth. It is the longest driver for far under $100 that I could find, based on reviews.

InTech is a very cheap golf brand, and they make a lot of terrible clubs. However, sometimes they end up with a decent club, and this is one of those times.

Again, I want to remind you that you purposely came to this article that is focused on CHEAP golf clubs, so don’t be surprised by what you see. If you want a step up from these clubs, click on the top of the website above for the best value golf clubs you can find. Here, you will find drivers from $100-$200 that will provide much better results and more value overall.

This InTech driver does what you are looking for, though. It is long. Balls leave the club face with not a lot of spin, so the ball can go for miles if hit correctly.

I’ve never hit this driver personally, as I stay away from off brand clubs, but in general it seems like the best bang for the buck when you are on a very tight budget.

Alright, every driver so far has been far under $100. However, let’s get into at least ONE driver that is a little pricier. The driver is a TaylorMade R15. It is one of the most popular drivers of all time, and it at a great price right now.

It is much cheaper than those top of the line drivers that cost $400. This driver has been released for many years and is, at this moment, one of the best value clubs that you can buy for cheap.

If you click on the picture or link and determine that the TaylorMade R15 is no available any more, here is what you should do:

This will result in a club that was released many years ago, but that still produces great golf shots! TaylorMade has always been my go to when I suggest discount drivers to other golfers.

They have just released so many great models over the years, that the old models keep falling in price. Their quality doesn’t change!