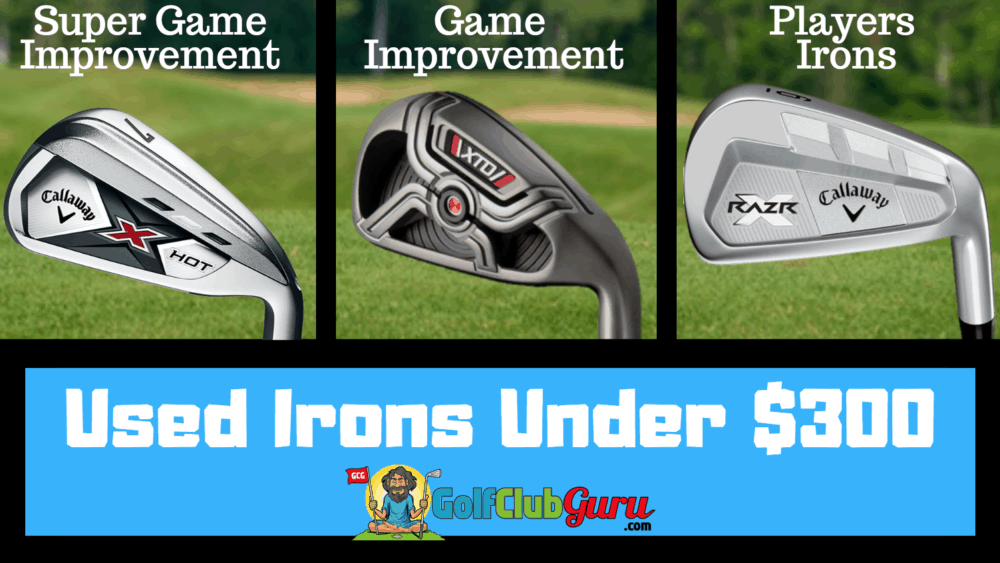 Irons cost far too much money in my opinion. Who can afford to spend $1,000 on some clubs? I wish I could, but I can’t. If you are in the same boat, you might be interested in the irons sets that I talk about in this article. I’ll be focusing on irons sets that were the best performing releases a few years ago. I’ll also be focusing on slightly used clubs, as they provide way more value for your money.

Real quickly, let’s talk about the best irons that you can get for under $300:

Without further adieu, let’s discuss the best irons that you can buy for under $300, depending on whether you want a super game improvement set (super forgiving), a game improvement set (distance + forgiveness), or a players set of irons (better distance control, feedback, feel, & workability).

Note: to save you the most money, all links and pictures that you click will take you to the respective eBay listings!

If you want a set of irons that is focused primarily on being as forgiving as possible, this is the set for you. These are perfect for high handicappers. The Callaway X Hot irons are about as forgiving as they come for under $300. They have super thick top lines and wide soles to decrease the odds of fat shots. There is a lot of perimeter weighting around the club face compared to the other two sets that I mention here.

For a super game improvement iron, these irons are crazy long. Most sets targeted to newer golfers and high handicappers focus just on being as forgiving as possible., but I would classify this set as the most forgiving + great for distance as well. The lofts are a good big stronger than most irons, but the low center of gravity and lower  placed weighting helps get the ball in the air easily and quickly.

If you want a very underrated game improvement iron, check out the Adams XTD iron set. These irons are perfect for high to mid handicappers, and they are the lowest priced option of the three that I’ll talk about in this article. For someone that needs game improvement irons, I wouldn’t recommend you spend too much money in the first place. In decent condition, you should be able to pick this set up for WELL under $300.

This set is a great combination of forgiveness (not as forgiving as the X Hot though), distance, and price. My friend picked up a brand new set for a great price online, and I’ve hit them on multiple occasions. For a game improvement iron, it feels pretty great at impact, and it looks awesome at address. I really like the darker finish personally, which most irons don’t have.

For better ball strikers and lower handicap golfers, you should definitely check out the Callaway RAZR X forged irons (check and see if you can get the X Forged irons below $300 as well, as they often times are). The RAZR X irons are almost always under $300 for a set in decent quality. They feel and look incredible. Super compact, not so forgiving design. If you are confident with your ability to hit the center of the club face, you’ll be rewarded with better distance control, workability, feel, and feedback.

I’ve always been a fan of Callaway players irons, as they typically drop pretty drastically in price in just a few years. So if you are patient enough, you can save a ton of money by buying the iron sets that have been on the market for around 5 (or more) years. Irons, especially players irons, haven’t improved that much in the past decade, so there is no point in buying the newest releases when they are 3-4x the price as these.