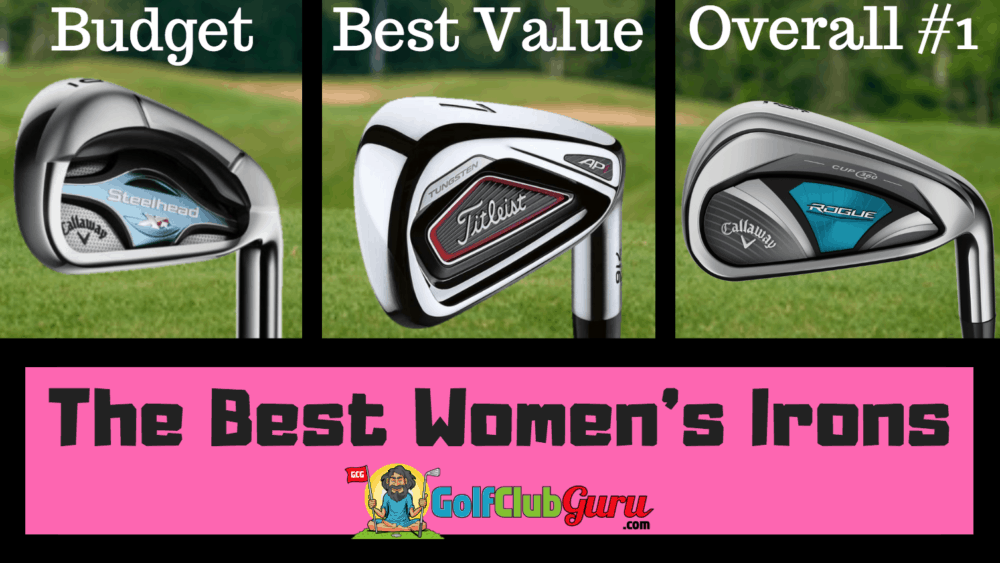 As women become better golfers, they often times find that they have outgrown their complete set of clubs. As a result, they tend to branch out and buy higher quality individual drivers, fairway woods, hybrids, irons, wedges, and putters. For some reason, there are not many articles online about the best women’s irons sets on the market. I thought that I would fix that. If you are like me, there is a limit to how much you are willing to spend on golf clubs, so I will give you the best options for your budget.

Before we talk about the best women’s irons for 2018, let’s talk about what you need to make sure you buy, as mistakes are very common when lady golfers buy clubs online.

So now you know what you should keep in mind when buying a women’s set of irons. Let’s get into the best sets that you can buy in 2018 depending on your budget.

Please be aware that all links & pictures will take you to the respective listings on eBay!

If you don’t want to shell out around $1,000 for a set of irons, check out this used set of Callaway Women’s Steelhead XR irons. With the combination of being used + being released a few years ago, this set is super underpriced. It will perform nearly just as well as the expensive new releases like the Rogue, but at a steeeeeeeep discount.

When it comes to distance and forgiveness, the Steelhead XR falls just a tad short of the newer releases, but not by much at all. The lofts aren’t as strong, so the clubs won’t travel quite as far, but that won’t affect performance much. The main innovation is the Hollow Bore-Thru hosel design. Basically, they took weight from the hosel and strategically moved it to the club head, resulting in more forgiveness and higher launch angles.

For the price, you really can’t beat this set. If I were a women looking to buy new irons, I would probably buy this set or another used set from the same website.

If you are looking for the best value women’s irons, check out Titliest 716 AP1 irons. These are the most forgiving irons that Titleist has ever made. If you want ever more value, consider getting the AP1 irons from an earlier model (such as 710, 712, or 714.). They are slightly improved with each release, but there are not significant differences between the sets overall.

These irons are the best mix of price and performance. They are as forgiving as they come, but they aren’t necessarily the longest. So if you are looking for the longest set on the market, check out the Callaway Rogue irons (next section).

If you can afford the best of the best, I don’t see a reason why you wouldn’t want the Callaway Women’s Rogue irons. They are the longest irons on that the market. The lofts are strong, the club faces are fast, and the design encourages the ball to fly as high as possible. That combo has resulted in the best distance irons ever! The Women’s Rogue irons incorporate two technologies (Variable Face Thickness and 360 Cup Face) to ensure that golf balls shoot of the club face as the fastest speeds that the USGA will allow.

The first two irons that I mentioned are the same as the men’s sets, but with women’s graphite shafts. This set, however, is made specifically for women. The club heads are lighter than the men’s version to allow you to create as much club head speed as possible. They are also made with wider soles, larger cavities, and lower COGs (centers of gravity) to lead to higher, longer ball flights.

Why the Rogue Women’s irons are the best: