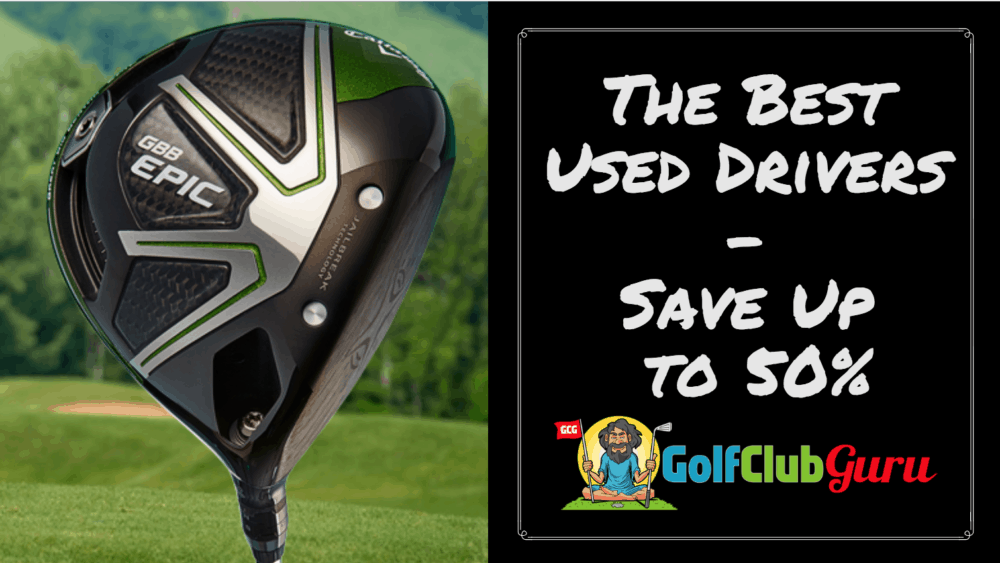 I think we all wish we could spend all of our money on golf clubs. Rent/mortgage payment? Nah, I’d rather buy a brand new driver. Car insurance payment? No thanks, I’ll take a couple brand new wedges instead. Alimony payment? Screw that, I want a new set of irons!

Unfortunately, we are often limited in how much money we can spend on golf clubs. For that reason, I almost always recommend buying slightly used, preowned golf clubs. They are way cheaper, perform just as well, and last nearly just as long. Unless you are buying a wedge, I almost always choose the used route as opposed to buying brand new clubs.

Note: all links and pictures in this article will take you to the item’s page on eBay.

With that being said, let’s look at some user drivers that are a few years old and slightly used. We’ll save our money (for now) and end up with a great value used driver that won’t lose it’s value as soon as we take off the plastic.

If you are looking for a super long pre-owned driver, the Callaway Rogue is the one for you. It is the most expensive of the 4 drivers that I’ll talk about in this article, but it is well worth it if you can afford it. You will still save around $150ish by choosing to buy used instead of new.

Why is the Rogue so long? Super fast face (a tad bit faster ball speeds than the Epic) and lighter weight jailbreak technology to improve clubhead speed, forgiveness, and ball speeds across the entire face. Off center hits practically travel just as far as perfectly hit drives, which is kinda scary honestly. It is widely considered the best combination of distance + forgiveness for drivers this year, and I can see why.

Personally, I’m not a huge fan of the extended crown, as it doesn’t look super, super appealing at address. However, if I could afford this club, I’d get over that pretty quickly due to the performance.

If you are currently struggling with your driver, I completely understand. It’s the club that I have struggled with the most in the past. I could hit the ball plenty of distance, but I simply couldn’t find the fairways often enough. So, I looked for the most forgiving driver for me. I decided on a much cheaper option a couple of years ago (Callaway RAZR X if you are curious), but I would pick the Ping G SF Tec Driver if I had to do it all over again today.

This driver is very oversized, regarding both the club head and the sweet spot. With the SF Tec (straight flight technology), they put a weight in the club head towards the heel, making it much easier for the face to turn over. So if you struggle with slicing or just an open club face in general, this is a great option for you. Other than that, drives seem to fly pretty straight no matter where you are hitting it on the face. Those that struggle with center contact will definitely benefit from gaming this used driver. Plus, you should save around $100 or more by buying it used.

Weight towards the heel, as opposed to closer to the toe of the driver, makes you have to do less work in closing the club face. If it were towards the toe more (or more centralized), you would have to actively turn your forearms/hands over more in the downswing, which would lead to inconsistency. If you already miss left more often than not (for righties), this is probably not the driver for you.

As drivers age, demand drops. People are always anticipating the latest models and they are typically willing to spend the money for them. The more patient you are, though, the more money you will save. For example, the TaylorMade R1 driver was the most talked about driver many years ago. People were happily shelling out $400 for it, but now you can pick it up closer to $100. So for waiting that many years, you saved roughly $300.

The R1 driver is a great all around driver for the money. Personally, I am a big fan of the crown. The feel/sound at impact is a little more “clicky” than I would like, but I feel that way with most TaylorMade drivers anyway. For the best combination of price and performance, this is likely a top contender, along with the Callaway GBB Epic driver that I talk about below.

With the release of the Rogue, the Callaway Great Big Bertha Epic driver has since fallen pretty drastically in price and demand. Both drivers have the jailbreak technology, and they perform very similarly in nearly every way. I’m a much bigger fan of the Epic’s crown, which is a little more compact.

Considering that you’ll save roughly $200 compared to buying a new Rogue driver, this is a great deal in my opinion. I always check out the prices on Callaway PreOwned (linked above) first, as they typically offer the widest selection and best prices for Callaway clubs (no surprise!).

Along with the Rogue, the Epic has a super fast face and is super forgiving across the entire club face. In my opinion, it’s the best value used driver that you can buy right now, as it gives you the best bang for your buck.