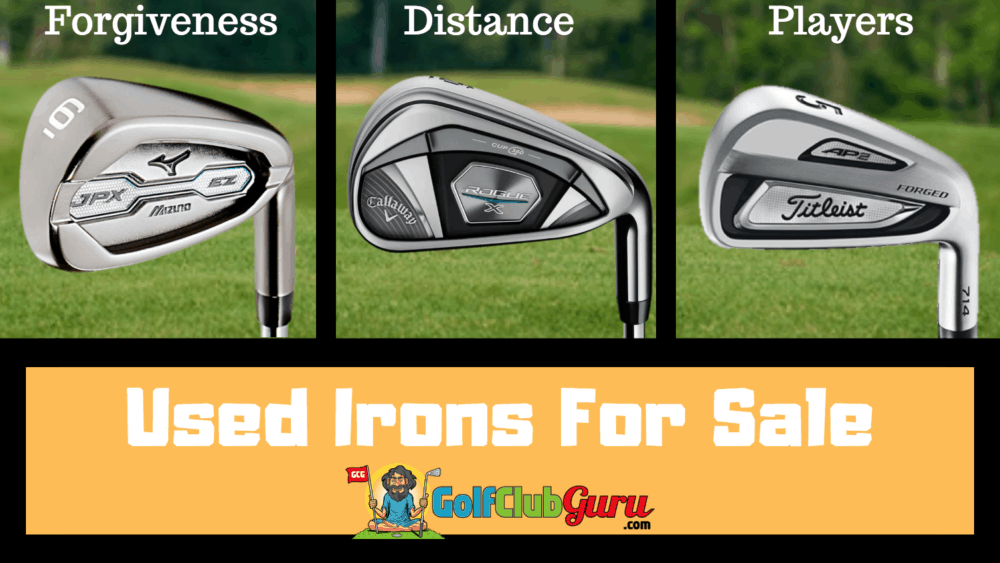 Brand new irons sets, as you probably are already well aware, can cost up to $1,000+. Who is their right mind is spending that much money on clubs? I guess those people just have more money than they know what to do with. What a great problem to have, huh?

I think a major misconception in the golf industry is that newer clubs are any better than clubs 5-10 years ago. For the most part, lofts have simply gotten a little stronger. A 5 iron today is similar to a 4 iron a decade ago. Other than that, there have been only negligible improvements in distance, control, feel, and forgiveness. So why buy a set that was released this year for $1,200 when you can buy a set that was released 5 years ago for 1/3 of the price? Then add in the fact that the irons are slightly used and you are saving even more money!

So here is what we are going to be mostly focusing on in this article:

If you are looking for sets of irons that I didn’t mention here, check out my article on the best websites to buy used golf clubs. These websites I mention are the best companies that have used iron sets for sale at the moment. When it comes to price, selection, and customer service, these three websites cannot be beat!

Note: all links will take you to the iron set’s available listings on eBay.

Let’s get into the good stuff!

For the most forgiving used irons that you can buy, consider the Mizuno JPX EZ irons. They are made to be Mizuno’s most forgiving iron set that they have ever made, and they did a hell of a job. With oversized sweets spots, wider soles, and a lower center of gravity, balls seem to fly high and far no matter where you hit it on the face.

You really can’t go wrong with any Mizuno irons, as they are one of the best in the business. But most Mizuno irons are much harder to hit, as they are focused more on feel and distance control. That’s why Mizuno made the EZ series of clubs. To be clear, any model of Mizuno EZ clubs would be a great fit for you. They are all made for high handicappers and beginners who struggle with getting the ball in the air and hitting the middle of the club face consistently.

Many golfers are focused solely on hitting the ball further. It can be a very addicting pursuit, as you can ALWAYS hit the ball a couple of yards longer. If you are one of those people, check out the Callaway Rogue X irons. They have very strong lofts (a 6 iron is similar to a 5 iron on other clubs), but they launch the ball at incredible heights, which is the perfect combination for a distance iron. As the top game improvement iron of the year, they are currently pretty expensive. However, many used sets are currently available at a pretty steep discount compared to buying them new. Plus, depending on when you are reading this, they have likely fallen in price by many $100’s since I originally wrote this.

When it comes to the technologies used, Callaway implemented 360 Face Cup and Variable Face Thickness (VFT) into these irons to make sure the ball was rebounding off the club face at the highest speeds possible. Compared to the regular Rogue irons, the Rogue X irons are lighter, stronger lofted, and longer. They also have lower and deeper COG’s (centers of gravity) to launch the ball at the highest launch angles possible.

Better players are less interested in distance and forgiveness. What they give up with those two characteristics, players irons gain in control, feedback, and workability. The Titleist AP2 irons are a perfect match for someone looking to save money by buying used clubs. You can go back as far as you would like in the AP2 series and save more money. The 710 model, although released many years ago, will still perform similarly to the 718 AP2’s. I think the 712 and 714 models are a good middle ground, as there are more options for sale at the moment.

The earlier models of Titleist AP2’s are the perfect mix between price and performance for a better player. The feel/sound and distance control is top notch. If you can consistently hit the center of the face (of if you just like more compact/sleeker irons), these are the ones for you. By buying a used set, you will easily save hundreds of dollars. The AP2 irons are known for being very durable as well, especially for a players iron. So you should be able to use even a used set for many years to come.