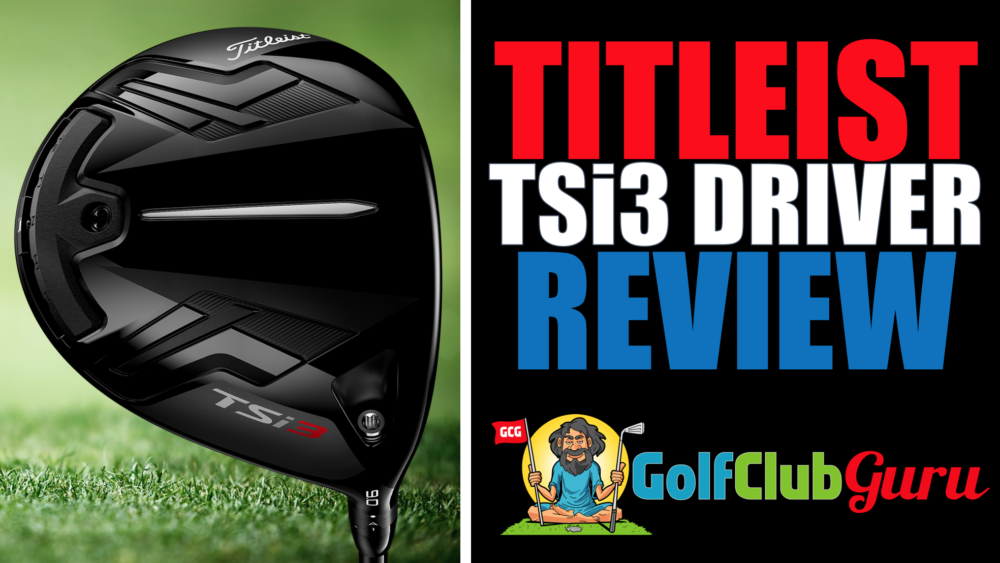 The Titleist TSi3 driver is a very adjustable, long driver for those that can hit the center of the club face on a consistent basis. That pretty much sums up the entire review. Thanks so much for reading and have a great rest of your day. Just kidding.

Although I truly think the TSi2 driver is a far better option for the large majority of golfers, it seems like the TSi3 is selling more on many online retailers, and I can see why you may be interested in it.

Here’s our in-depth review of the Titleist TSi3 driver. We promise to remain unbiased with every single review that we post. We don’t get paid to post anything. We only get paid a small commission if you make ANY purchase through our links. But at the same time, we typically recommend the best value clubs on the market to save you money, as opposed to pushing the new $550 drivers that would make us a larger commission. Thanks for reading!

I’ve always loved the simplistic look of Titleist drivers. Black heads with a single sight line – no need for distracting lines, designs, or colors. The bottom of the driver head is the same. Just a great looking design that will look good in any bag. I also really like the black/white contrast in the club head cover. Truly would love to put this club in my bag if the price tag weren’t so high. The overall look of the club is awesome – but what about the performance?

Unfortunately, every swing is different. I can’t tell you how the Titleist TSi3 driver is going to work with you and your specific swing. But, I can give you some basic things to expect from the driver.

To begin with, I truly don’t think this is a driver for the masses. The driver is not very forgiving. It felt like even my slight mishits were severely punished, while more forgiving driver would have straightened the mishits out some.

However, on my perfectly struck shots, I hit some of my best drives ever. Super long, great trajectory, and very low spin. On average and with all things equal, I hit my drives about 5 yards lower with the TSi3 than the TSi2, which makes sense. The TSi3 is a slightly lower launching, lower spinning driver. If you are confident that you can hit the center of the club face day after day, it’s a great driver for you. However, if you are like me (play once a week oftentimes), then you’ll want the added forgiveness of the TSi2, not the TSi3.

The TSi3 driver is very adjustable, which some golfers may love. Others, like myself, aren’t a huge fan of adjustability, as naive golfers can often times rely on adjusting the driver when really their swing is the problem. You can adjust the sliding weight on the far back of the sole to adjust ball flight (towards the toe for a fade bias, and towards the heel for a draw bias).

Who The Titleist TSi3 Driver If Meant For

It seems that the Titleist TSi3 is targeted to two (sometimes overlapping) target audiences:

Compared to the TSi2 Driver

It makes sense to go ahead and talk about all of the similarities and differences between the Titleist TSi2 and TSi3 drivers.

Before we do that, though, I want to make one thing clear. Just because you THINK that you’ll drive the ball better with one driver based on the differences, that’s not always the case. You may like the idea of the TSi2 better than the TSi3, but you may hit more ideal numbers with the TSi3 for whatever reason. So, if you can, get professionally fitted by a club fitter. Try out the different heads (don’t neglect other brands) and different shafts to find the one that works the best for YOUR swing.

If you want a driver similar to the TSi3 but at a much lower price, then look no further than the Callaway Great Big Bertha driver. It was released about 5 years ago, but it has many of the same features as the TSi3. Obviously I’d encourage anyone to support a company like Titleist over Callaway any day of the week. However, that’s not always possible if you want the best driver for your money.