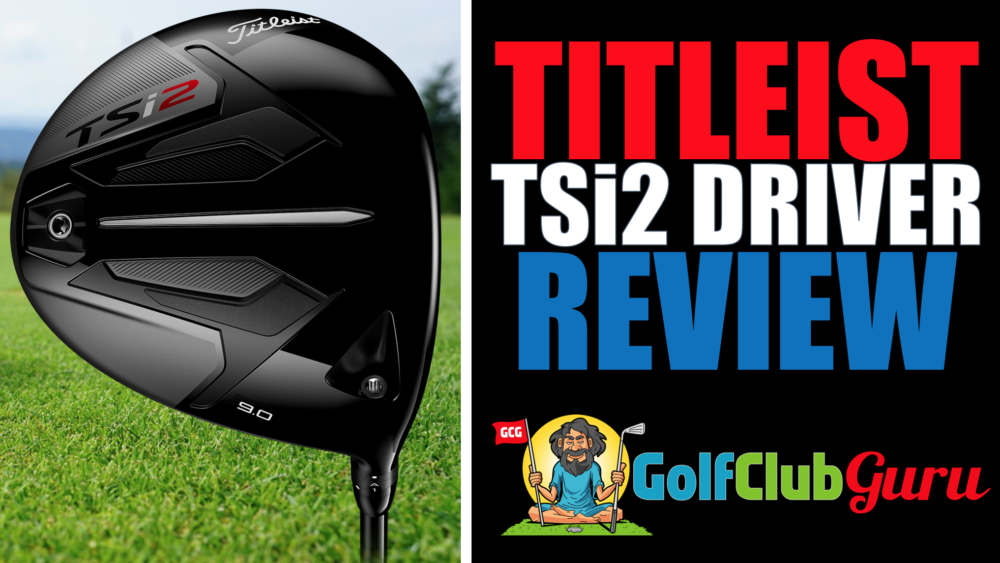 Titleist has been in a bit of a slump with their drivers for the past 5 years or so. Obviously a brand like Titleist has extremely high standards, so performance is not the problem.

Truthfully, I think Titleist has lost some of their fan-base specifically because they DON’T market themselves like TaylorMade and Callaway do. TaylorMade and Callaway release new drivers twice a year, and with each release try to convince golfers that their new driver is the greatest thing since sliced bread. It’s completely BS, and it unfortunately works. When people think of great drivers, they don’t think of Titleist. They think of TaylorMade and Callaway. It’s a shame, really.
Titleist drivers are top notch, and the Titleist TSi series is no different. If you want to support a premium company that doesn’t oversaturate the market, then you can’t go wrong with a driver from the Titleist TSi series.
In this review, we’ll be going over the Titleist TSi2 driver, which is marketed as the longer, high launching, more forgiving driver of the series.

The Titleist TSi2 driver has a wider, larger profile club head at address that is very obvious. It screams “super forgiving”, which is great for the majority of golfers that simply need to hit more fairways. Although both the TSi2 and TSi3 are both 460cc size club heads, the TSi2 driver appears much larger at address due to the longer, lower club head. I really like the all-black crown and the white/black contrast club head cover.
Appearance is easy to talk about, but performance is a little more difficult. We won’t be able to tell you how your swing SPECIFICALLY is going to perform with the Titleist TSi2 driver, but we can definitely give you some general expectations.
To start with, this will be a great driver for golfers that want to launch the ball high and far with some added forgiveness. Truthfully, this should be the model that nearly every golfer gets (compared to the TSi3). The strong majority of golfers don’t need sliding weights and much adjustability. The average golfer needs a low center of gravity design that launches the ball high. The average golfer needs a large profile club head that makes even off-center strikes still fly far and relatively straight. That’s it.

Who The Titleist TSi2 Driver Is Best For

The Titleist TSi2 driver is not for everyone. The Titleist TSi2 driver is best for a high-budget golfer that wants to upgrade their driver to add distance, forgiveness, and high launch, all while supporting an incredible company that doesn’t take advantage of naive golfers.
If you are OK with spending $550 + tax + possible shipping + possible club fitting fees, then this driver is great for any golfer that wants to hit more fairways and gain some distance. Obviously, that’s a lot of money for just one club. But if you are fine with spending that much, then I’d highly recommend this driver over a competitor like Callaway or TaylorMade.
On the other hand, if you want a driver like the Titleist TSi2 but without spending much money, I’d recommend going to the last section of this review for a better value alternative.

Comparison to the Titleist TSi3 Driver

Titleist released two models: the TSI2 (what this review is about) and the TSI3. Here are the similarities & differences:

If you want the performance of the Titleist TSi2 but for a price tag of $200 or less, then consider the Titleist 910 D2 driver. No joke: I’ve gamed this driver for like 6 years now, and have no plans of changing. The Titleist 910 D2 is like 10 years old now, but it still performs like a premium new release.
I’ve tested my 910 D2 to all of the major releases in the past few years, and the difference is always minimal at best. No, I will not spend another $400+ on a driver to add 1-2 yards or to see a nominal increase in consistency. The price is just not worth it for ME. But, it might be worth it for you.
Both the Titleist 910 D2 and the Titleist TSi2 driver are high launching, super forgiving, and long off the tee. One is priced at $550, while the other can be bought for less than $100 in great condition. Yes you read that right. Less than $100. And, of course, if you want a newer model, you can check out the 913 D2, 915 D2, and 917 D2 drivers. As you can probably guess, there are two years between the models.
Thanks so much for reading my honest, unbiased review of the Titleist TSi2 driver. If you have any questions or comments, PLEASE leave them below. I’d be happy to hear from you.