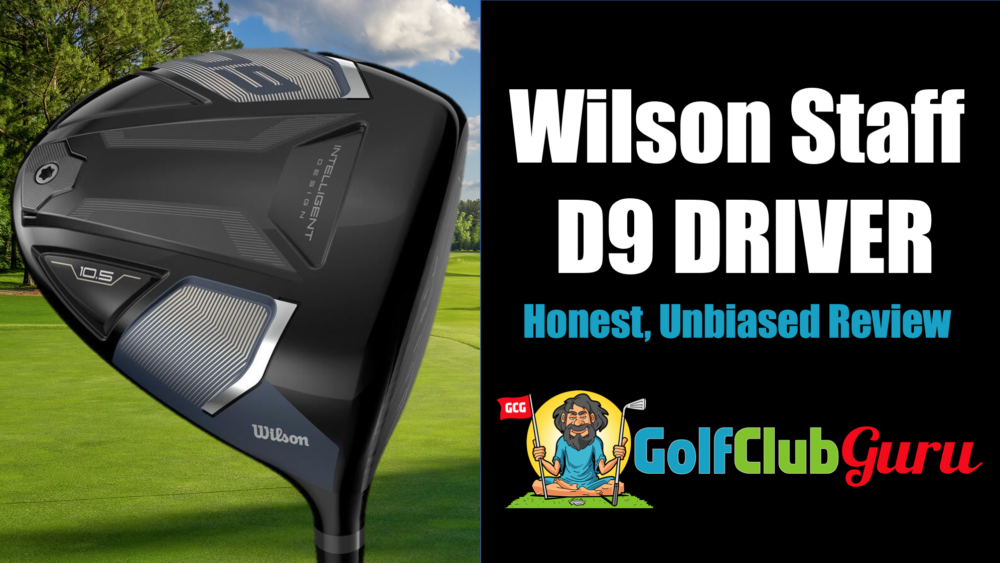 It’s hard to believe that Wilson used to be the #1 brand in golf in the 60’s and 70’s. While they will most likely never make their way into the top 5 golf equipment brands ever again, they do have some strong points. For one, they practically never advertise anymore. That helps them keep costs down and allows them to offer some of the best value golf clubs on the market, especially for beginners, seniors, and high handicap golfers.

Wilson’s D Series has focused on one thing in the past: light-weight driver heads and shafts to increase distance. With each model, they found a way to save a few grams. Over the years, that added up. Eventually their drivers started to feel cheap. Sure the distance was good, but the consistency was garbage and no tour player would dare touch a Wilson driver.

The new Wilson Staff D9 driver is heavier and more technologically sound… finally. They’ve significantly upgraded the club face, added some weight to the head and stock shaft, and increased the overall forgiveness on mishits. However, they’ve still got a long way to go in my opinion.

Here’s our honest review of the Wilson Staff D9 driver.

To put it lightly, I don’t love the look of the crown at address. The checkered pattern looks kinda cheesy and spotty – but that’s just my personal opinion.

The sole of the driver head looks much more promising – it’s clear that they are going for a low center of gravity design for high forgiveness and high launch angles. The 10g weight is low and far back to help the ball fly high right off the face. The weight can also be switched for a lighter 3g weight, but I wouldn’t recommend it for the majority of golfers.

In general, I think the Wilson Staff D9 driver is one of the highest launching drivers of all time. That may sound like a great thing – but it’s not for everyone. If you have a very slow swing speed and struggle with getting enough air on your drives, you truly may not find a better driver.

Who The Wilson D9 Driver is Best For

This one is actually pretty simple. Time and time again, the Wilson D9 driver has produced high launch angles and high spin rates. That may sound like a terrible combination, but that’s not always the case. For very slow swing speeds, it’s common to not generate enough backspin and to not get enough air on your drives.

So, if you have a slow swing speed and struggle with getting enough height on your drives, then the Wilson Staff D9 driver is perfect for you. On top of that, the D9 comes with plenty of forgiveness that the same target audience is typically looking for.

Truthfully, the D9 driver seems to be a great fit for many senior golfers and growing kids/teenagers, especially those on tight budgets that would rather spend $350 instead of the typical $500+ on a driver.

Typically, I’m giving cheaper alternatives for clubs that cost $500+. In this case, I had to dig a little deeper to find a better value option for a club that’s only $350. But there is still plenty of money to save if you want to.

If you want to save a little bit of money, I’d consider the Ping G400 driver instead of the Wilson Staff D9 driver. Both are high launching drivers with plenty of forgiveness.

I’d even wager that the Ping G400 driver will hit the ball further on average and have a tighter dispersion for the majority of golfers. Oh, and you can get a slightly used model fo the Ping G400 for around $200. So on top of $150, you’d end up with a higher quality driver basically all-around.