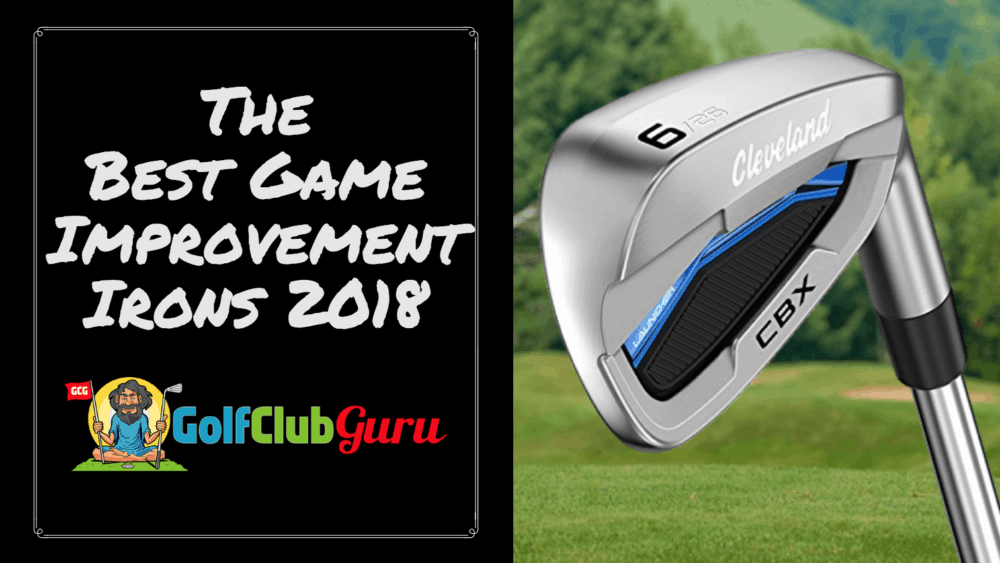 Game improvement irons, like hybrids, make the game of golf a bit easier. Who doesn’t like shooting lower scores? No one, that’s who!

Note: all links and photos in this article will link you to the respective eBay listings if you click on them.

To sum it up in one sentence: with game improvement irons, you are giving up distance control in favor of more distance and forgiveness.

If you have decided that you need a set of game improvement irons, here are the best ones that you can buy that were released in 2018 (or late in the prior year). I’ve split this article up into four different sections, depending on your budget and gender. If you’d prefer to look at game improvement irons that were released a few years ago (they are much cheaper), check out my golf on a budget series of articles.

For Someone on a Tighter Budget: Cleveland Launcher CBX Irons

Cleveland Launcher CBX irons are, in my opinion, the best set of irons that Cleveland has ever produced. These irons are super forgiving, which is what high handicappers and mid handicappers should be looking for to improve the playability of their mishits. On top of that, these irons aren’t super, super bulky like other game improvement irons are. Most people find the clunky, huge club heads to be less appealing at address, and I agree. However, you still need some perimeter weighting and slightly larger toplines for a game improvement irons, which this set definitely has.

Thankfully, Cleveland doesn’t price its irons at as high of a price compared to the rest of the market. Their wedges are top of the market, because they own that market in a way. With irons, though, they are a bit of an underdog, so they can’t justify a $1,000 set like other brands can.

Their V shape sole designs drastically reduce the odds of you chunking the ball, which is a huge plus. Their “feel balancing technology” also moves the sweet spot slightly closer to where you are hitting your shot, which is a huge plus for distance AND distance control. Their groove design (taken from what they do with their wedges) also increases spin on their short irons, which many golfers love. Seeing a short iron stop quickly on the green or roll back a little is always super exciting.

If you want further confirmation, just check out the reviews online. You’ll find it difficult to find a review with less than 5 stars, which is extremely rare nowadays.

Here’s why it’s the best game improvement iron set for those looking to spend less money:

If you want the best value game improvement irons, check out the TaylorMade M4 irons. TaylorMade has always been focused on distance when it comes to every club they make (driver, woods, irons, etc), and this set is no exception. The distance control isn’t top notch as you might expect, but you will benefit greatly from the forgiveness and overall distance. This set is longer and more forgiving than the Cleveland set listed above, but it comes at a slightly higher price.

Because TaylorMade releases multiple sets of irons each year, their sets reduce in price every 6 months or so due to the expectation of a newer, “improved” set. At the moment, it’s hard to beat the price of this set of M4’s though. They are a great value at the moment, as they have dropped hundreds of dollars since their initial release. Considering that you are likely reading this article many months after I wrote it, it’s probably dropped another few more hundred since I wrote this.

As TaylorMade puts it: “M4 irons unlock a new level of straightness, distance, and forgiveness in a product designed to be the longest in our irons lineup.” That’s a pretty good way to describe this set. Distance and forgiveness. Not much else, but most golfers really don’t want anything else anyway, especially if it takes away from these 2 most important characteristics.

Their Ribcor technology, speed pocket, and face slots all guarantee that the face flexes as much as possible at impact, resulting in a bigger “rebound” effect off the face and more ball speed as a result.

Here’s why it’s the best value set of irons for high handicappers in 2018:

For Someone That Wants the BEST Game Improvement Irons: Titleist 718 AP1

If you want the best mix of distance, forgiveness, feel, and control in a game improvement iron set, the Titleist 718 AP1 irons are what you are looking for. They are extremely forgiving compared to the AP2 set due to their wider soles and larger top lines. If you want a club at address that screams forgiveness, this is the one for you.

The Titleist AP1 irons, even previous versions, have been extremely well reviewed over the years. They consistently deliver exactly what high and mid handicappers want and expect. Their long irons are incredibly forgiving, which is a place that many struggle with. Their shorter irons are slightly less forgiving, as they focus a tad bit more on distance control.

Here’s why the Titleist Ap1 718 irons are the absolute best game improvement irons on the market:

Women’s irons are made a bit differently than men’s irons. They are generally lighter (both club heads and shafts), are always available in graphite shafts, and come in “whippier” shafts (ladies flex shafts). This will ensure that you can create the most club head speed possible at impact.

The Callaway Rogue Women’s iron set is definitely the best set of game improvement irons that women can buy in 2018. They are super light weight. They have a wide sole and a large cavity. Paired with a low center of gravity, these irons will allow you to get the ball in the air very easily. I think it’s fair to say that this is the most forgiving set of irons that women can buy today.

When it comes to technology, their Variable Face Thickness and 360 Face Cup both ensure that is as fast and forgiving as possible. These two allow the face to flex more at impact, resulting in a large rebound effect at impact, allowing the ball to fly much further than previous iron sets.

Here’s why it’s the best set of irons for women: