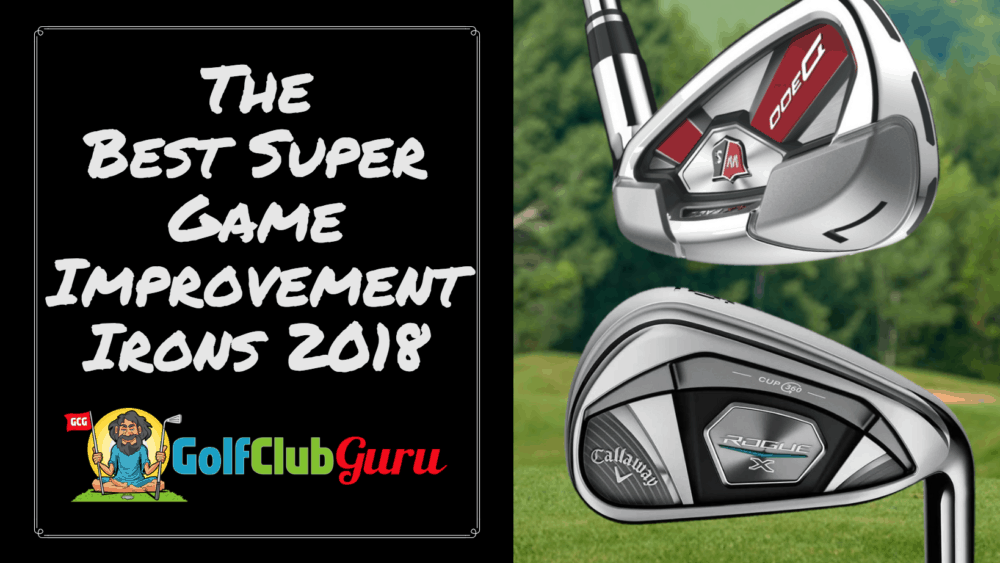 Note: all links and pictures in this article (if you click on them) will take you to the respective eBay listings for the irons.

So, let’s give a brief rundown of what super game improvement irons are all about. Then, we’ll talk about who should use them.

So now that we have talked about what they are and who should use them, let’s discuss the best 2018 super game improvement irons that you can buy today. If you want to save some money, consider checking out my best golf clubs on a budget series, which focuses on clubs from prior years that have slowly gotten cheaper each year.

Wilson often times gets a bad rep (or is it rap?) when it comes to golf clubs. However, they are consistently making great performing irons every couple of years. The D series is no exception. Their latest 2018 model, the Wilson D300 irons, are a great option for those looking for a super game improvement iron set without breaking the bank.

These irons are incredibly forgiving. Although the look at address isn’t as desirable as the other two sets mentioned here, the results won’t vary a whole lot. Sure, they won’t be near as far as the stronger lofted Rogue X irons, but the same lofted clubs (Wilson D300 7 iron vs Callaway Rogue X 8 iron) will fly nearly the same distance. If you can get over the number written on the bottom of the club, you’ll save a lot of money by choosing this set.

These club heads are very oversized, therefore increasing the size of the sweet spot. There is perimeter weighting focused on both the heel and the toe of the club, therefore increasing the forgiveness across the entire face of the club. These Wilson D300 irons also use what they call “power holes” that significantly reduce the weight of the club, which allows golfers to swing the club faster and develop more club head speed. Lastly, this set uses what they call “FLX Face technology” that maximizes face flex at impact, resulting in a larger rebound effect and more ball speed.

Here’s why it’s the best super game improvement set on a tight budget:

If you are looking for the absolute MOST forgiving set of irons that you can buy, check out the Cleveland Launcher HB irons. Longer irons are shaped more like a hybrid, and shorter irons are less clunky.  So the longer the iron, the more of a hybrid design that is has, and the more forgiveness it has.  The longer irons don’t look very appealing at address. However, what they lack in appearance at address, they gain in forgiveness across the entire club faces. So, if you often find yourself hitting balls on the heel or toe, a super game improvement set like this one could be the best one for you.

The Cleveland Launcher HB irons are not as long as the D300 irons or the Callaway Rogue X irons, but they are much more forgiving. Off center hits will fly just about as well as a perfectly struck shot, so they benefit those that don’t consistently hit the dead center of the face.

Forgiveness is not only determined by the size of toplines, though. It also depends on weight distribution, especially how low the center of gravity (CoG) is. The CoG of this set is extremely low and back, resulting in very high launch angles. They don’t call it HB (Hi-Bore) for nothing. So if you struggle with getting the ball high enough in the air, this is likely the best set for you.

Besides being the most forgiving set, this is also the best value super game improvement set. Cleveland is primarily a wedge company, so they are seen as a bit of an underdog when it comes to producing high quality irons. For that reason, they can’t get away with charging insane prices for their irons sets like this one.

How is it the best value set of irons?

This set is by far the best set for anyone that wants to hit the ball longer without sacrificing feel. Compared to the standard Rogue irons, the Callaway Rogue X irons weigh less, they are longer on average, they hit the ball higher, and their lofts are stronger. It’s very rare that a company can reduce lofts while also increasing the heights that the ball flies. They do this through a very strategic placement of weight behind the face of the club.

The X version has a much wider sole and a larger club head which lowers the center of gravity and helps encourage a higher launch angle at impact. The lofts of the clubs are not only stronger, the lengths of some of the clubs (only the 4-6 irons) are longer as well. This leads to as much distance as possible, while taking away just slightly from control. Most golfers would prefer the extra distance anyway, especially if they are shorter than most the golfers that they typically play with.

Each Rogue X iron club head is about 10 grams lighter throughout the set compared to the regular Rogue irons. This allows more club head speed, which in turn results in longer distances.