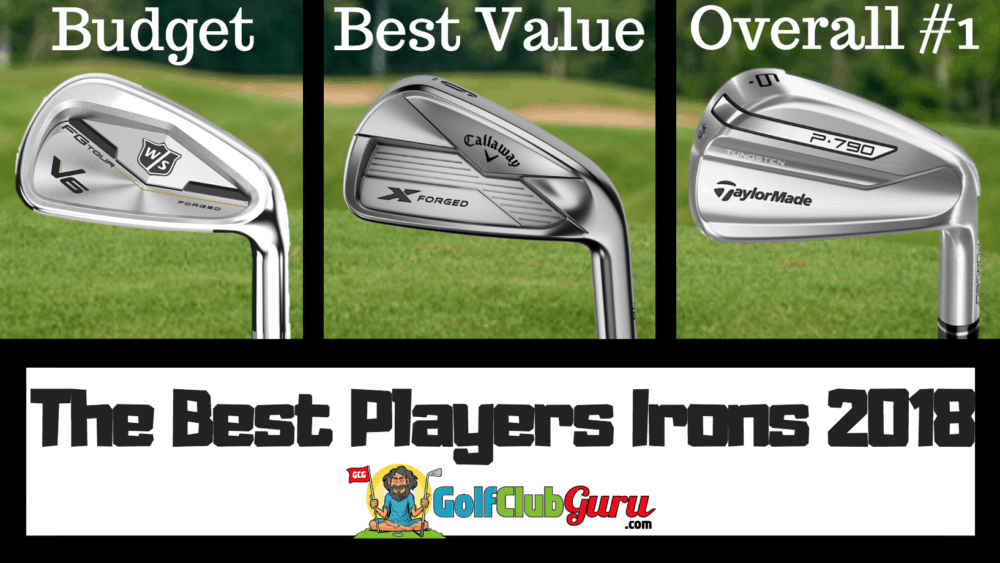 I’ve always loved reviewing players irons. I know that typically better golfers are going to be reading these, so I can talk a little more in depth than in articles that I know beginners will mostly be reading. I can talk more about distance control, how compact a club head is, and feel/sound at impact.

Note: all links and pictures in this article will take you to the respective listings on eBay.

So, to begin with, let’s talk about what I look for in a set of players irons:

So those are the four things that I look for when I am reviewing a players iron set.

With those in mind, here are my favorite players irons of 2018. I’ve hit all of these, whether it be my friend’s clubs on the range, demoing them at a demo day, or just demoing them from my home course’s pro-shop. In the future, I hope to be able to build up a big enough audience to review clubs straight from the manufacturer with my ideal specs so I can best compare the clubs’ performances.

I can’t explain why Wilson is still looked down upon. The last few Wilson players irons that I have tried have felt just as good as the equipment double in price. Although the Wilson Staff V6 Forged irons are the most expensive set of Wilson irons in a while, this set is well worth it. It is still far below the average cost of more popular sets of players irons.

My experience with them was unfortunately short lived, as I just got to hit them at a demo day. This forged set of clubs felt incredible at impact though, with a very faint sound coming from the vibrations on a perfectly struck shot. Although Wilson Staff is not very well represented on tour, most of their staff is playing this set of irons… and for good reason!

A better player will like the increased feedback, better distance control, and sleeker look at address as compared to a game improvement set of irons. The weighting on the long irons are split between the toe and heel, offering a bit for forgiveness there. On mid and short irons, the weighting is more centered behind the sweet spot to offer better distance control where you need it. This set of clubs is the perfect mix between the feel and feedback of a muscleback design but with a cavity back design for more forgiveness on off center strikes.

This set of Wilson Staff V6 forged irons are nearly everything that you could want in a set of players irons, and at a steep discount! Wilson is still an underdog in the market. If they keep producing clubs like this, though, they will regain a lot of their market share without a doubt.

Callaway is always one of my go-to’s when picking the best value set of irons. Due to the fact that Callaway releases a new set of irons pretty often, their prices drop pretty drastically after a few months that they are released. Customers always know that a new set is right around the corner, so the demand for a slightly new set drops pretty quickly.

For that reason, the Callaway X Forged 2018 irons are my best value option for this year. They are still far more expensive than my typical “best value” pick, but these are no doubt worth the extra money. Plus, they are still a good bit less than the TaylorMade P790 irons that I talk about below. I got a chance to hit my friend’s set on the range. Luckily he let me hit them for as long as I wanted. I was blown away by how easy they were to hit and how sleek they looked at address.

Callaway X Forged Irons have passed in depth experimentation from many of the top PGA tour players, they are made with a premium forging process, and they have an incredibly sleek look at address. Their triple net forging process results in a great feel and sound at impact. Other benefits of these irons are their center of gravity progression and groove pattern. The COG progression makes the longer, more difficult irons a bit more forgiving. On the other hand, the shorter irons are designed to allow you to take dead aim and fire away at any pin. The groove pattern reduce fliers from the rough and supports more distance control on average.

If I were to buy a set of irons today, I would likely buy these ones, or I would go against the grain and even buy the Wilson set that I mentioned first. Both options are excellent choices for those that want to improve their ball striking. These clubs require you to learn how to hit the ball on the center of the face pretty consistently.

I can’t speak more highly of the TaylorMade P790 iron set. Luckily my pro shop carries the demo 6 iron of this club. I’ve probably hit two hundred balls with it, and I can’t get enough of it. It provides such a quite sound at impact, allowing you to feel like you hardly hit the ball at all. Mishits sound and feel completely different, so you truly know when you miss the sweet spot. However, off center strikes aren’t penalized that much for a players iron.

When you look at address, it appears that this set is a TAD bit larger than most players irons. It’s hard to tell from the picture above. However, it is still much more compact than a game improvement iron. Plus, what you give up in compact profile, you gain in distance and a bit more forgiveness.

Here’s what TaylorMade has to say about it: “P790 irons pack powerful performance into a clean, classic design to deliver unprecedented distance in a players iron. Through a combination of forged construction and our revolutionary new SpeedFoam Technology, golfers will experience feel, forgiveness, and workability unlike any iron of this caliber.” Normally I’m not a big fan of looking at the manufacturer’s website to get a feel for how a club truly performs. However, their description covers everything pretty well. It’s a super long players irons that has great feel at impact and allows a good bit of workability and feedback.