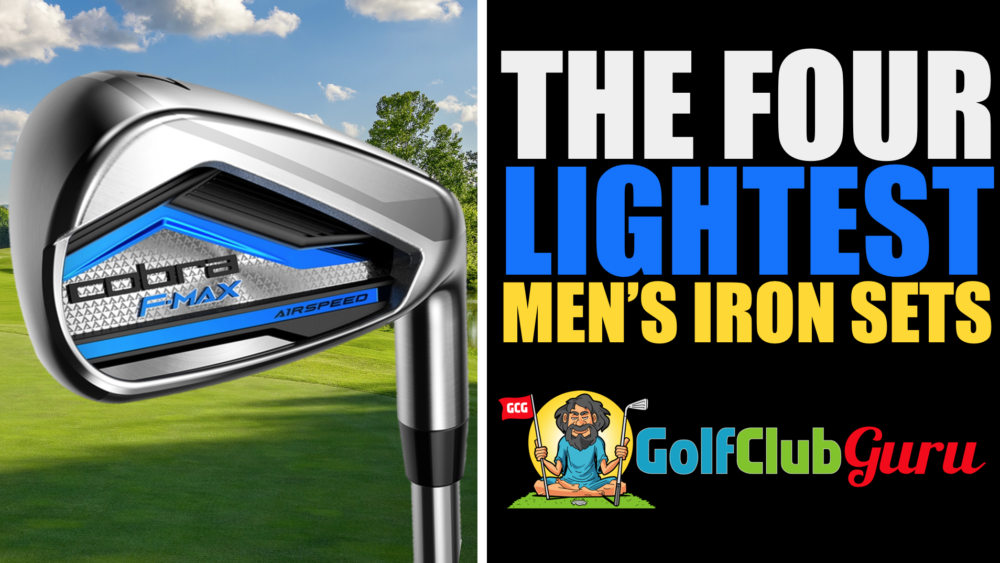 The Lightest Irons for Senior Men

I want to make one thing absolutely clear: lightweight irons are not always better.

Who Benefits From Lightweight Irons?

Who benefits from super lightweight clubs? Those that have very slow swing speeds. Typically, senior golfers and men that simply have slow swing speeds for other reasons (bad flexibility, short arms, low athleticism) are the ones who should buy light weight irons. An easy way to determine if you should buy lighter clubs is if you 1) get tired at the end of your round due to the weight of your clubs or 2) if you know that you should be hitting the ball further than you currently are.

One last thing: the irons that I’ll talk about in this post are all going to have graphite (not steel) shafts. Graphite shafts are FAR lighter than steel shafts, and they are also easier on your joints. Steel shafts have no role in the bag of a senior’s clubs, except for a putter (maybe) and a wedge (maybe).

Sorry for the long introduction. Here are the four lightest sets of irons for men.

If money is not a concern, then XXIO is going to be your go-to brand for the lightest clubs on the market. They dominated our article about the lightest men’s drivers, and their irons also take the gold without much contest.

Considering that their entire business model is selling light weight & forgiving clubs, they’ve become pretty popular for senior golfers. Their main customer base is overseas, but the Americas are seeing a big increase in popularity.

The XXIO Prime irons are the lightest irons that have ever been produced for men (ignoring the cheap off-brand clubs that won’t perform well at all). It’s truly amazing that they can make an iron set so durable, forgiving, and long hitting – all while staying extremely light weight.

Unfortunately, most company’s don’t often list the weight of their iron club heads, and they never give a total for the entire iron either. XXIO is the one exception – bless their soul. I’m betting that the other companies simply can’t match their “lightweight-ness”.

Other than the weight of the club, the Cobra F-Max Airspeed clubs are incredible forgiving and high launching. That’s a great combination for the majority of senior golfers that struggle with hitting the center of the clubhead and with getting enough height on their iron shots.

Wilson has been hit hard in the past 10 years. Not many golfers are buying their clubs, even though their prices are far below other brands. The one thing that many golfers don’t realize is this: Wilson makes some of the lightest clubs on the market. Their D series of golf clubs continues to be some of the lightest clubs each year, which are great for seniors golfers that want to hit the ball further.

The Wilson Staff D200 irons appear to be the lightest irons that Wilson has made. Same was the true with the D200 driver, as well. Although the weight difference between the D100 and D300 sets is minimal at best, any weight savings will help.

Callaway used to be king of the lightweight irons with their old Big Bertha iron set with super light graphite shafts. However, they seemed to get away from the lightweight focus, instead shifting their priority to increased ball speeds via thinner club faces.

The Callaway Epic Star Flash irons are unlike anything that they’ve made before. It features a lightweight & forgiving design of a game improvement iron, but with a minimalist, compact profile and forged feel of a players iron.

Although the Callaway Epic Star Flash irons are a little pricy, you may find that they are worth it due to the lightweight design that can allow you to launch the ball higher than ever before. Before you spend this money money, I’d highly recommend that you get fitted first, so that you can find the optimal shaft and head combination for YOUR game.