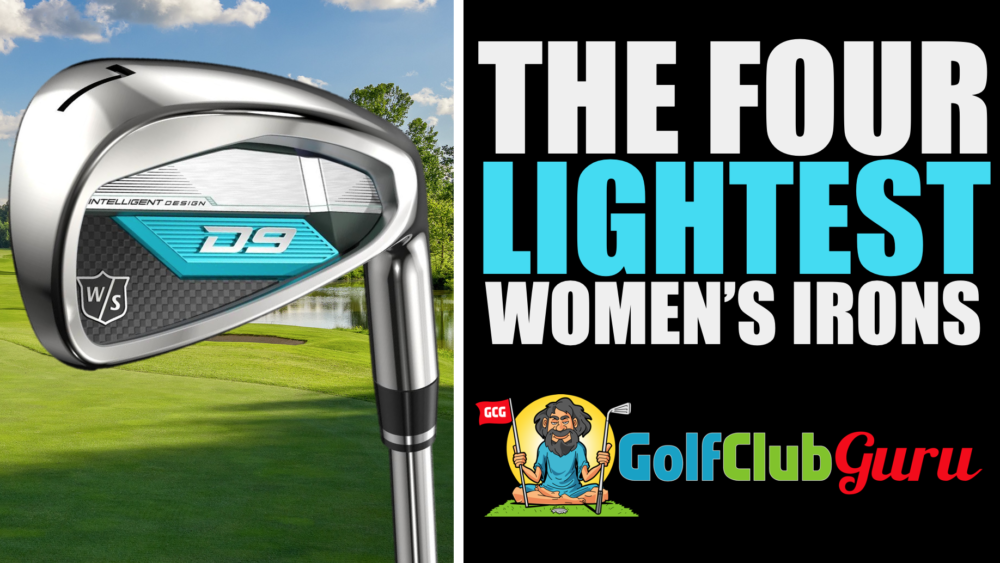 The Lightest Iron Sets for Women

Not all women golfers will benefit from lighter irons. However, many would.

If you struggle with generating enough club head speed to launch your iron shots high in the air, then I’d recommend getting a lighter set of irons.

Although lighter irons will increase your swing speed (& therefore your distance), you may find yourself losing some consistency. That’s because it’s harder to know where the club head is throughout the swing when the club is so light. So, you’ll have to weigh the pros and cons to figure out which is more important to you.

Unfortunately, only a couple of brands release the actual weights of the clubs. Almost all of them release the weight of the graphite shafts and of the grips, but not always the club heads. So, it’s difficult to give you actual rankings in order, but I’ve down the absolute best that I could.

This article will discuss the 4 lightest iron sets for women.

I wouldn’t be surprised if you’ve never heard about XXIO. Basically, it’s a brand that focuses ONLY on lightweight clubs. They are always high-launching, forgiving, and come stocked with super lightweight graphite shafts. It’s not just some random off-brand, though. It’s a brand that’s owned by the same company as Cleveland & Srixon. Although the majority of their customers are global, XXIO is growing is popularity in the US.

The XXIO Prime Royal Edition irons are the lightest irons that women can buy… no doubt about it. Their irons range from 300-330 grams, which is considerably lower than other brands. Typically, the only golfers that game XXIO clubs are senior golfers that want to hit the ball as far as possible. No other brand makes clubs as light as XXIO does.

Although the prices are a bit outrageous, many senior golfers say that the clubs are worth it. Less weight = more distance & less pain over the course of the round. You get what you pay for!

Although Wilson has seen a steady fall in popularity since the 1980’s, their clubs for seniors are still top notch. Wilson’s D-series puts a huge emphasis on decreasing club head weight to increase swing speed, and the Wilson D9 ladies iron set is no exception.

Thankfully, the Wilson Staff D9 irons are the best value option of the four in this article. The other three are far overpriced in my opinion. Wilson offers some of the best value clubs for seniors, so this is probably the iron set that I would pick if I were in your shoes.

If you are looking for a combination of lightweight + distance control + feel, then look no further than the Callaway Epic Forged Star iron set. It’s a great looking set of irons that comes with forged club heads – perfect for distance control and incredible feel/sound at impact.

The Callaway Epic Forged Star women’s irons can’t be beat when it comes to feel, feedback, and distance control. It’ll be tough to ever go back to a cast set of irons after hitting a forged set.

Callaway building a high performing set of irons like this ALL IN A LIGHT WEIGHT DESIGN is pretty incredible. If I had a huge budget for a new set of irons, this is probably the set that I’d go with. It would be the last set of irons I ever bought – as this set would still be a great fit when you eventually become a low handicap golfer.

Cobra continues to improve their F-Max series of golf clubs every year. For the past 3 years or so, they’ve taken off a few grams of each model to increase club head speeds. This year, they made a significant improvement over the F-Max Superlite clubs by making the 15 gram-lighter model: the Cobra F-Max Airspeed irons.

They took a few grams off the club head, a few off the grip, and a few off the graphite shafts. Small improvements amount to a big difference in the end. If you want a set of irons that is a great combination of distance and foriveness, this set is the one for you.

If you wanted, you could go ahead and get the entire set of the Cobra F-Max Airspeed set of clubs. All of the clubs are significantly lighter in weight than the average women’s set of clubs.