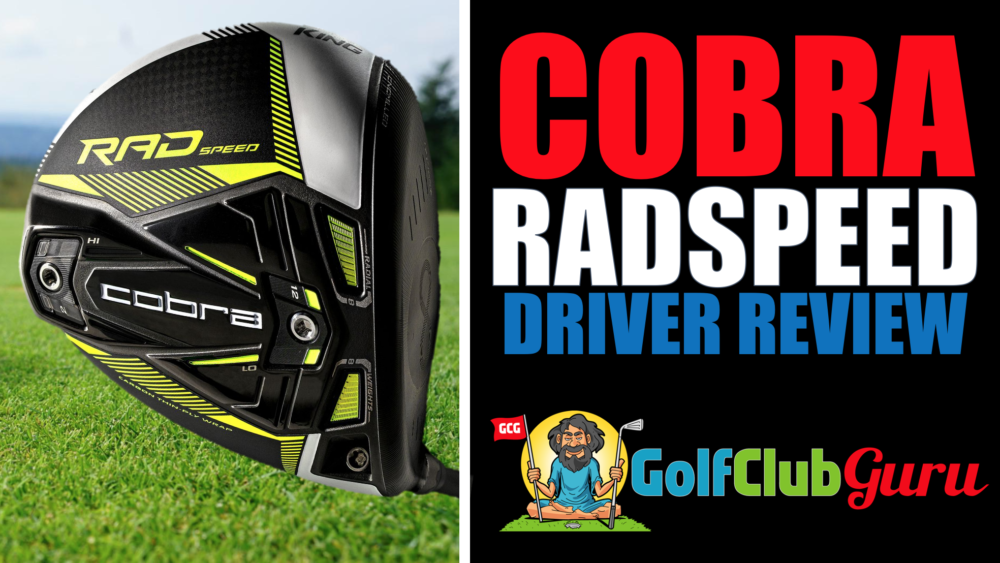 Let’s start with appearance, shall we? The RADSPEED driver comes in two different color options: red/white/blue and white/black/yellow. Let me start by telling you that I have a weird obsession over red/white/blue golf clubs. So yeah, I absolutely love the look of the red/white/blue RADSPEED driver sole, but I’m not a huge fan of the blue crown at address. It’s all personal preference, really. The white/black/yellow driver is a great look as well, and I like the black crown more personally.
If you take a look at the sole of the club, you’ll see the radial weighting that is the basis of the name. The original RADSPEED has far more weight towards the face of the club as opposed to the back. That’s a tell-tale sign of a driver seeking to be low spin for those that with fast swing speeds.
It’s impossible to tell you how you will perform with the Cobra RADSPEED driver. It depends on too many factors, like: swing speed, angle of attack, shaft option, etc. However, I can give you general expectations.
It’s hard to tell you exactly how YOU and YOUR swing are going to perform with the Cobra RADSPEED driver. As a result, we strongly recommend that you get professionally fitted by a club fitter or at least a PGA professional to find the best head & shaft combo for your swing.
In general, the Cobra RADSPEED driver is best for those with fast swing speeds that want a lower spin driver. Truthfully, I find it very deceiving that Cobra is recommending this driver for “0 to 15 handicaps”. It would be more helpful to put it in terms of swing speed, but even that isn’t a perfect way to pick a driver. If you don’t have a super fast swing speed (100mph+), you most likely would hit the ball longer with the XB or XD drivers. And if you are looking more forgiveness or for a large draw bias, then you should look at the XB or XD models instead.

Compared to the other models in the series, the Cobra RADSPEED driver:

Who is the Cobra RADSPEED driver best for?

The Cobra RADSPEED driver is best for those with fast swing speeds that generate too much spin on their drives. If your swing speed is 100mph+ or more AND you know that you are hitting drives that fly too high and with too much spin, definitely give the RADSPEED a try.

But, keep in mind that your spin problem may be a swing problem, not a club problem. I’d always recommend trying to incorporate low-spin features into your swing first, before buying a low spin driver. An easy way to decrease spin would be to hit more up on your drives, as opposed to a downward strike. Teeing the ball more forward and incorporating a small tilt (right shoulder lower than left at address) can make a big difference, but also take some getting used to. I’d recommend getting some lessons with a PGA professional so that he/she can help you in person figure out why you are hitting drives with too much backspin/sidespin.

I’d wager than the KING F7 (in low spin settings) and RADSPEED will perform within 1-2% of each other when it comes to distance, forgiveness, and low spin rates on average. So is the extra $$$$ worth it? That’s up for you to decide.