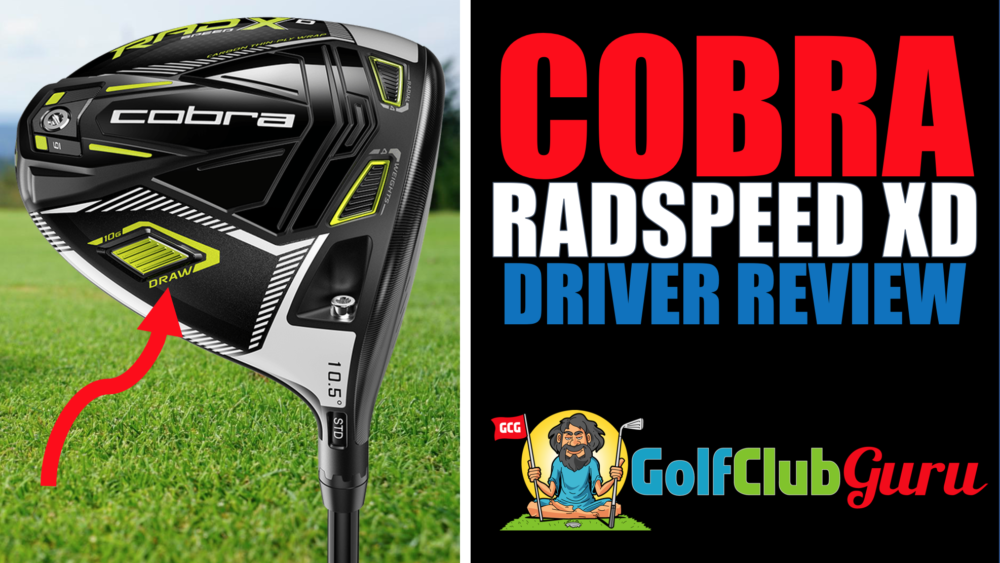 Cobra’s new RADSPEED series of drivers has just been released. It includes the RADPSEED, the RADSPEED XD, and the RADSPEED XB. This review will dig into the XD model, which I’m assuming is code for Xtra Draw.

Surprisingly, this is the very first Cobra driver that is draw biased without adding the ugly offset that no one wants. I’d expect a model just like this one for every new driver release in the future from Cobra. This is the first of many, that’s for sure.

Before we get into the review, let me get something off my chest. You’ll lose my respect (as if that means anything) if you choose to buy a $450 driver to fix a swing flaw that you can fix for FREE with practice. If you are tired of hitting slices or pushes,  I’d strongly recommend that you do the following: 1) get a lesson from a PGA professional if you can afford it or 2) watch lots of videos and start tinkering with your swing to learn how to hit draws naturally.

There… I said it. Now we can get into the Cobra RADSPEED XD driver review.

When it comes to looks, it’s just like practically any other driver released in the last 5 years. Black crown, logo on the center of the head, slight design around the perimeter of the crown… we’ve seen it all before. Looks don’t do much anyway.

If you check out the sole of the driver, that’s where the “magic” happens. First thing to look at would be the 10g weight towards the heel of the driver. This weight is the only reason that the RADSPEED XD is a draw-biased driver. The weight towards the heel simply makes the clubhead easier to turn over through impact withOUT having to twist your hands and forearms in that split second position.

Other than the draw-biased weight, it’s simply designed to be a forgiving driver. Weight is focused low and back on the head, leading to higher launch angles and a very large sweet spot.

Truthfully, I think this should be the most purchased driver of the 3 in the series. For the majority of golfers (who struggle with leaving the club face open through impact), the Cobra RADSPEED XD driver will be the most forgiving & longest driver. If you struggle with hitting slices and pushes to the right, then the draw-biased aspect alone will help you hit longer, straighter drives.

However, there’s only so much that I can tell you about the performance of the driver. Every swing is different, and it’s impossible for me to tell you what driver (and shaft) will be best for YOU. For that reason, I strongly suggest getting fitted by a professional club fitter if you want the best results. If you can’t afford to get fitted, then you also can’t afford this driver. And if that’s the case, then you need to go ahead and jump to the “Better Value” section at the bottom of this article.

The Cobra RADSPEED XD driver is best for slicers and pushers who want a forgiving, top-of-the-line driver, no matter the price. If price is a huge factor here, then there are simply too many better alternatives that will perform practically the same for closer to $150.

But if you want a driver that will be up-to-date with technology for the next 5 years or so, then the RADSPEED XD is the one for you. However, if you can afford the $450 RADSPEED XD, then you can afford a proper club fitting to make sure that you are truly getting the most bang for your buck. If a $100 club fitting will result in another 5 yards and another fairway hit per round, I bet you’d be happy that you did it.

Compared to the Other Two Models (RADSPEED & RADSPEED XB)

The Cobra RADSPEED XD will be:

If you want a driver just like the Cobra RADSPEED XD driver but without the $450 price tag, then I’d strongly recommend the Ping G400 SFT driver. Super long, super forgiving, super draw-biased. Just like the Cobra RADSPEED XD driver. That combination will cover everything that most slicers and pushers want in a driver. Oh, and you can buy a slightly used one for around $200. Winner winner chicken dinner.

Thanks for reading my honest Cobra RADSPEED XD driver review. Have any comments/concerns? Leave a comment below. I’d be happy to discuss.