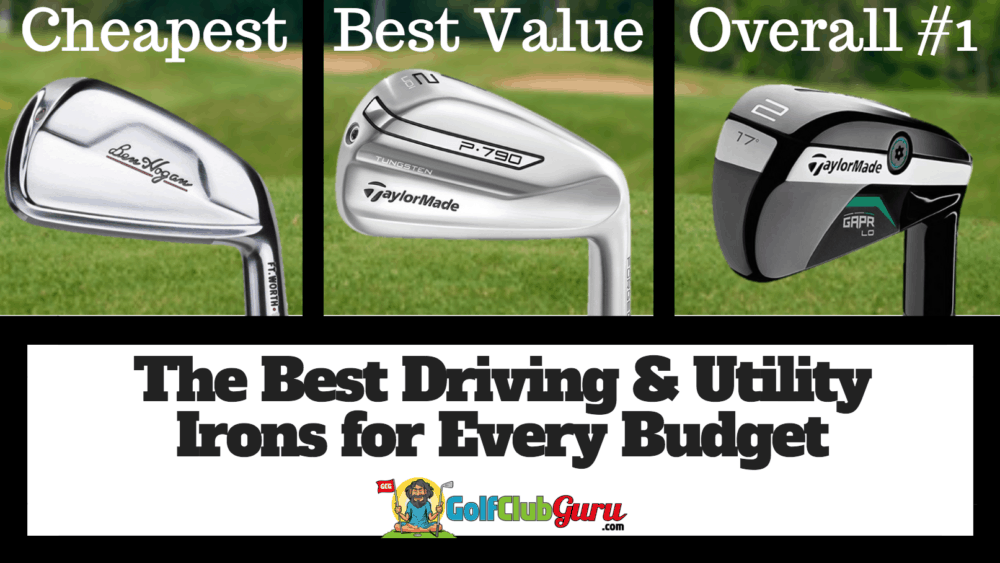 Driving irons, or utility irons, are becoming more and more popular among better golfers. They can be a a great asset off the tee, as well as off the deck. Hitting what used to be 1,2, or 3 irons can be nearly impossible to do on a consistent basis. Sure, the pros could do it pretty well if they had to, but it takes a near perfect strike and impact position. Why make golf harder than it has to be?

Some of you reading this might not be too familiar with the concept of a driving or utility iron. Let’s talk a bit about what they actually are:

So now we know what driving irons are for and who they are best suited for. You might not be interested in one that costs upwards of $300 just for one club though. For that reason, let’s talk about the best utility irons that you can buy for your budget. If you want the cheapest option that is still a solid club, check out the first section. For those looking for the best value driving iron a budget, the third option if for you. And, lastly, for those that want the absolute best of the best, check out my last section.

Note that all links and photos that you click on will take you to the respective eBay listings for the driving/utility irons.

Not everyone wants a driving iron that could cost close to $300. That’s a ton of money for a club, and that’s exactly why I write so many articles on the best budget golf clubs that you can buy. If you don’t want to spend much money on clubs, you should be looking for the cheapest clubs that will still perform well.

If that is what you are looking for, check out the Ben Hogan Ft. Worth Hi utility irons. This is basically an entire set of more forgiving long irons. For that reason, you can end up with a few irons from the same brand/make if you want, not just one utility club. They cost about half the amount of the other clubs in the article, and they will perform plenty well. They won’t feel as solid as the other two, but they will get the job done. They have lots of different loft options. The 20 and 22 degree clubs are great utility clubs!

Unfortunately, this Ben Hogan set of utility irons doesn’t offer a ton of low lofts. You’d struggle to find one with 22 degrees or less, but they are available someone online. Other utility irons go down to 16 degrees for those looking for the most penetrating flights, but you won’t be able to maximize that benefit with these.

For those looking to save some money when purchasing a driving iron, this Ben Hogan iron is the one for you. There is a big difference in price for utility irons after you get passed this cheap option.

The Sexiest Utility Club on the Market: Srixon 2017 Z Utility U65 Iron

It doesn’t just excel when it comes to appearance though. It is a great club all around too! Great feel and great penetrating trajectory when struck well. By far one of the best irons that you can have off the tee. If you play in windy or hard conditions, you’ll love this utility club.

Price wise, I couldn’t really place it perfectly into a category. This club isn’t cheap enough to be the lowest priced. It’s priced similarly to the TM P790 (below), but I think the TaylorMade P790 iron has so many popular reviews that it deserves the best value spot. And then the new GAPR LO driving iron is by far going to be the top seller in upcoming years, so the U65 couldn’t take the #1 top spot either.

However, it is such a great club that I had to mention it in this article. Again… what a beauty.

The TaylorMade P790 UDI was probably the most talked about utility iron that has ever been released… and for good reason. What a great looking club. Appearance aside, it performs great in so many ways. I think it lacks a bit in feel compared to the GAPR (below), but not by much. When it comes to price, the release of the GAPR has decreased the price and demand of the P790 UDI.

In my opinion, this utility iron is the best mix of performance, price, and appearance. It’s still a bit above average compared to my other “best on a budget” clubs, but it is well worth it. TaylorMade has dominated the driving iron market this year without a doubt. These two offerings (P790 UDI and GAPR Lo) are absolutely top notch.

If you are like me, who always looks for the best bang for my buck when I buy golf clubs, this is my recommendation for you.

Some things that come to mind:

If you want the best of the best, then you want the TaylorMade GAPR Lo. It’s a slight upgrade to the 970 UDI when it comes to feel. They optimized the Center of Gravity (fancy term for weight placement basically) to launch the ball low and with a penetrating trajectory. Although I haven’t hit the club yet, I’ve heard some incredible first hand reviews online and from friends.

Personally, I am a big fan of the darker finish, which is rare in utility irons for some reason. This club has very little offset, which makes it better suited for a better ball striker. If you feel like you could hit a utility club pretty consistently, this is definitely the one for you. It would be worth the extra money, although the P790 UDI would also be a great option for you.

From what I’ve heard, the feel of this iron trumps any driving iron in the past. There’s not many feelings better than hitting a low stinger-like shot that feels like butter. Overall, I’d say this is the best mix of performance, distance, and feel.