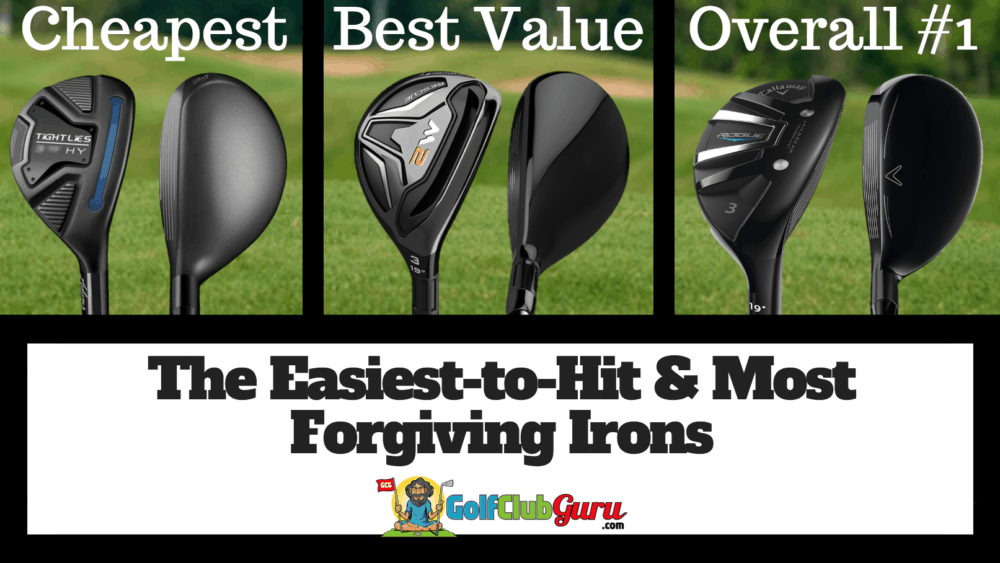 The Easiest & Most Forgiving Hybrids

We’ve all heard it before, probably on multiple occasions: hybrids are much easier to hit than long irons.

I’ve said it many times before, and firmly believe that is is true. However, many people think otherwise. They simply struggle with hitting their hybrids. Do I hit it likes a three wood? Or like an iron? Do I hit it with a sweeping motion or a downward strike? Should I take a divot with a hybrid? How is this easier than a long iron? Did we actually travel to the moon, or was it all just a hoax? I always get carried away, sorry.

So for those that struggle hitting a hybrid, my guess is that you either need more practice (find the best PGA instructor for you) or you simply need another hybrid. Not all hybrids have great feel, distance, and the ability to get the ball airborne quickly and easily. For that reason, let’s talk about the most forgiving hybrids. These are the ones that, in my opinion, are the simplest to hit correctly.

What does it mean for a hybrid to be more forgiving than the others?

Let’s discuss the best hybrids that you can buy today. Depending on your budget and how much money you are willing to spend, I think we can find the best hybrid for you personally.

Note: all links/photos, if clicked on, will take you to the respective listings on eBay.

Most hybrids today cost around $150-$225. If you want to cut that in half and still end up with  a super forgiving hybrid, this Adams Tight Lies Hybrid is for you. Adams has always been a leader among cheap-ish hybrids and fairway woods. Their hybrids are meant to be as simple to hit as possible.

I’m a huge fan of Adams Red, Pro, and Blue model hybrids, as they are all great discount options compared to the premium ones on the market. However, I think the Adams Tight Lies  is the best mix of price and performance. Such a great looking hybrid for the price. Can’t say that I absolutely loved the feel and sound, but the performance was top notch. If you want a better hybrid all around (feel, consistency, ball height, etc), check out one of the two clubs below.

For those looking to save as much money as possible, though, the Tight Lies hybrid is easily my best recommendation for you. Take the money you saved take a lesson with a PGA pro to learn how to properly hit it!

The Best Value Easy-to-Hit Hybrid for the Money: TaylorMade M2

The clubs that I consider the “best value” are typically clubs that were the best reviewed releases when they were first brought to the market. Over time, though, new clubs cause the demand for older ones to go down both consistently and drastically. The TaylorMade M2 hybrid is the absolute best mix of price, forgiveness, workability, and feel.

It was the most demanded hybrid a couple of years back, but the TaylorMade M4 new release has pushed the M2 out of the limelight. It’s still the same high quality club that is was before though! I would say that the majority of golfers that bought their M2 hybrids when they first came out still have the club in the bag. It’s only the golfers that chase the latest and greatest thing that have upgraded to the newer releases.

The feel of the M2 hybrid is simply incredible. It’s got a great sound and feel in your hands at impact, which is very satisfying. The distance control and consistency is top notch as well, or you wouldn’t have seen as many pros put it in their bag as there were.

The #1 Forgiving, Easy to Hit Hybrid on the Market: Callaway Rogue

What an incredible hybrid that Callaway has released with the “Rogue” clubs. The entire set is based primarily on increasing distance with their new and improved Jailbreak Technology. Basically, their designers put some solid rails inside the club head that have increased the ball speeds and forgiveness across the entire club face. This is actually the first time that they have put this technology in a hybrid, though!

The performance of the Callaway Rogue hybrid is absolutely top notch. Golfers of all skill levels have described the longest, straightest ball flights that they never imagined they could hit with a hybrid. If anything, it might require you to buy another club to fill the gap between your hybrid and your longest iron in the bag!

The second most important factor, when it comes to forgiveness in this hybrid, is the center of gravity. Using their patented “internal standard wave”, they have positioned the COG lower and more forward on the club face to encourage less spin and a higher launch angle. This leads to high shots that fly longer and straighter due to less spin on the ball.