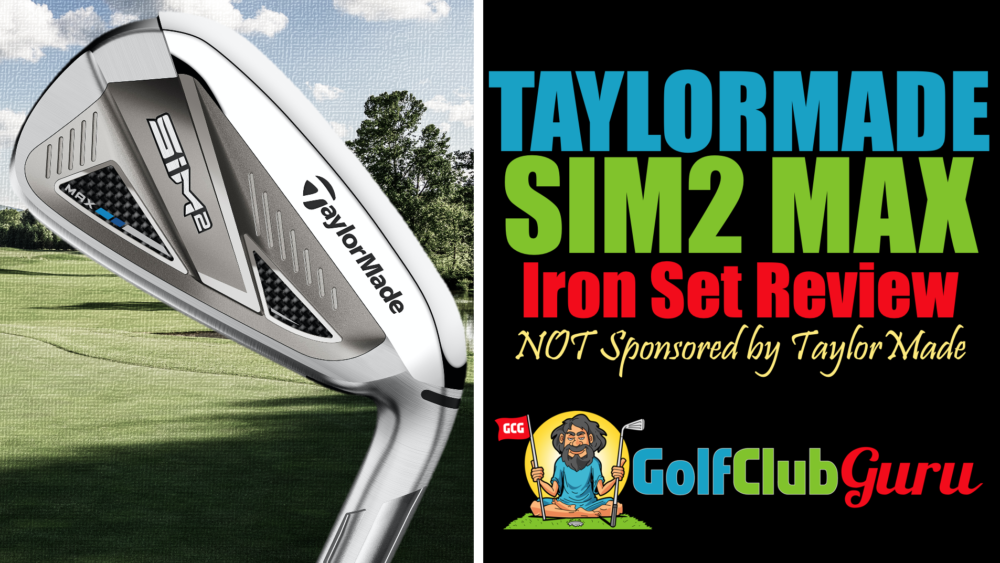 The TaylorMade sales and marketing team schedules a meeting. Sales have taken a hit, as the latest irons set (SIM) have been out for a whopping 3 months. “What can we do to increase sales?” one guy asks. “Why not just add a 2 to SIM, slightly change the design but basically not at all, and raise the price again?” BINGO!

And viola, the TaylorMade SIM2 Max Irons come to life.

For some reason, TaylorMade chose not to sponsor this site. It’s probably because I call them out on making garbage golf clubs and hyping them up to beginners as being the best clubs of all time. Yeah, that’s probably it. With this not being a sponsored review, you can be sure that it’ll be as unbiased as possible. Yes, I have links in my article, but I literally don’t care what you buy. I’d rather you buy the best value clubs, not the overpriced clubs like the TaylorMade SIM2 Max irons.

You’ll love the TaylorMade SIM2 Max irons if you like large toplines, soles, and lots of offset. The club heads have a very large profile, but not quite as large the even-more-oversized “Max OS” irons.

TaylorMade tries to “invent” new gimmicks every six months or so to stick on a club face and convince suckers to buy them. With the SIM2, they must have just gotten lazy and practically copied the previous SIM design.

When it comes to performance, the TaylorMade SIM2 Max irons are just like the last 10 models of game improvement irons from TaylorMade. They are very forgiving and very long… but not much of anything else.

You wanted an honest review? That’s what you are getting people! The TaylorMade SIM2 Max OS irons are no better than the TaylorMade Burner irons from 10 years ago. The main difference is stronger lofts that you’ll find in current releases, which basically take a 7 iron and instead stamp an “8” on the sole of the club to make you think you’re hitting it further.

While TaylorMade says that they incorporate a “forged iron feel” due to the “softer ECHO® Damping System,” I strongly disagree. They know that beginners and high handicap golfers won’t be able to tell the difference, so they just randomly say that these irons feel like forged irons. They don’t. These irons are much louder and send more vibrations through your body than forged irons in my personal experience, which isn’t surprising at all.

Who the TaylorMade SIM2 Max Irons Are Best For

Short answer: It’s best for the small group of golfers that want distance and forgiveness but don’t want the oversized design of the Max OS irons.

If you want distance and forgiveness, then it makes more sense to go with the TaylorMade SIM2 Max OS (oversized) instead of the Max. And with that being true, there is literally no point for the SIM2 Max iron set. It’s not durable, it’s not workable, it’s not aesthetically appealing, it doesn’t feel great at impact, and it’s not the best bang for your buck.

I guess that the TaylorMade SIM2 Max irons are best for golfers with high budgets that want forgiveness and distance in a large profile (but not as large as the OS model). That’s a very specific group of people. I just don’t recommend this iron set at all.

The TaylorMade SIM2 Max iron set is a terrible value option. They are way overpriced considering what you are getting (a clunky cast iron that literally doesn’t excel in any category).

A far better value option? Try the TaylorMade SpeedBlade irons from 5-6 years ago. There are no significant improvements in the two iron sets… trust me. The lofts are a tad bit stronger with the SIM2 Max irons, but not by much.

You can expect the same level of forgiveness, distance, feel/sound at impact, and distance control with the SpeedBlade irons as you can with the SIM2 Max irons. They also have a similar sized profile.

The main difference? You can buy the TaylorMade SpeedBlade irons (in excellent condition) for around $250, while the overpriced SIM2 Max irons will set you back $800-900.