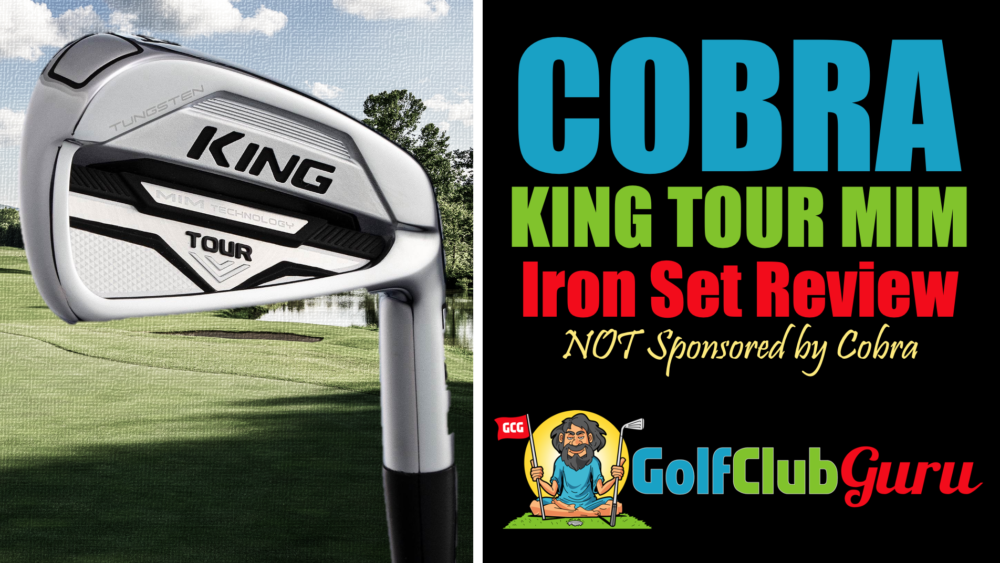 Let’s go ahead and clear the air here. Most irons on the market are cast irons, while some of the more expensive irons are forged irons. The Cobra King Tour MIM irons are neither – Cobra has “invented” a new process using metal injection molding (MIM).

Cobra says that their MIM process leads to more consistency and better feel at impact. They say that there are less human processes, which results in a more consistent club head across the set, as humans might lead to some small inconsistencies. They also say that the Cobra King Tour MIM irons are their “softest feeling players iron that performs and looks unlike any other”. Hate to say it but I consider this just another gimmick in the industry that is already filled with lots of… gimmicks.

Cobra is portraying MIM (Metal Injection Molding) as a process that is completely different than casting and forging. I just don’t see it. They want golfers to believe that this is revolutionary, but it’s simply not. MIM is just casting, but with small differences.

To really understand what’s happening here, we need to understand the current processes, especially the casting process. Casting, while less expensive than forging irons, has improved significantly over time. So much so that the majority of golfers would have no idea of the difference between a cast head and a forged head. Just look at the majority of Ping’s irons (which are cast) that have been played on tour at the highest level.

Casting involves heating up metal and pouring it into a mould. MIM involves… heating up metal (at a slightly higher temperature) and pouring it into a mold. What’s the difference here? A slightly higher temp and more work done by a machine versus a human? Sorry but that’s not a new process at all. That’s just a different way of doing the same process. And like I said, traditional casting has made huge improvements in consistency since the process started anyway.

So, no. I don’t think MIM is revolutionary. It’s just another gimmick that Cobra came up with to sell more golf clubs. They did the same thing with wedges already. The reviews, as expected, weren’t mind blowing.

Forged is king if you want the best performing irons (best feel, sound, and distance control) that money can buy. Not MIM.

This is a stunning looking set of irons that better ballstrikers will really appreciate Very, very little offset and thin toplines leave a relative “butter-knife” set of irons. Although the toplines are just a hair thicker than your average blade iron, the minimal offset is the main attractive feature here.

Overall, I consider the Cobra King Tour MIM irons a blade-like design but with a hair bit of extra forgiveness due to the low perimeter weighting. The majority of golfers will love the look of these irons, but mid to higher handicap golfers might be a little intimidating due to the compact club head.

Don’t get me wrong here. The Cobra King Tour irons with MIM are a great set of irons, both aesthetically and based on performance. But I literally think they felt worse at impact than the average forged players iron out there, so that’s pretty much a deal breaker for me. Why pay the price of a forged iron for a “basically” cast iron?

If you are confident with your ballstriking, then you’ll love the performance of these. Very consistent distance control, which is huge for golfers looking to go from single digit handicap to scratch. If you are NOT confident with your ballstriking, then I think the Cobra King Tour MIM irons will change that in no time. These irons literally force you to hit the center of the club face, or else you’ll be punished very badly with the result. That sound like a bad thing, but it’s actually a great thing in the long term. The quicker you learn to hit the center of the club face everytime, the better!

The Cobra King Tour MIM irons excel in workability and feedback at impact. Flighting the ball down and working the ball left and right is relatively easy compared to other irons on the market. Oh, and if you miss the center of the clubface, you’ll immediately know it, and you’ll also know where you missed the sweet spot (towards heel or toe).

Like I mentioned earlier, I wasn’t impressed at all with the feel/sound of these at impact. For them to try to convince golfers that their MIM process is better than forging seems crazy to me. Contact sounded clunky and the feel wasn’t “like butter” like they make it seem. They didn’t feel terrible by any means, but nothing special. They just felt like a standard set of cast players irons.

If you are looking for a compact players iron with incredible distance control, then this is the set for you. I hate hitting irons 10 yards longer than I intended, and this set is a great option to combat that. However, I wouldn’t buy this set expecting a game-changing technology due to the MIM process like Cobra wants you to think.

If money is a no concern, then go ahead and pull the trigger on the Cobra King Tour MIM irons. But if money is tight for whatever reason, then go with my better value option below. I’m always on the lookout for similar performing irons that are half the price of the new releases.

If you want a compact players iron with great distance control and at a great price, then consider the Callaway X Forged irons. I consider it a far better overall players iron, and at a far more attractive price.

No, these irons obviously don’t incorporate the MIM process, but I see no reason to choose an iron set that has. The Callaway X Forged irons are… you guessed it… forged. This leads to great feel and sound at impact, as well as the incredible distance control that you’ll find in the Cobra King Tour MIM irons. Oh, and they also offer a very compact club head, which is just as attractive as the MIM irons.

You can buy a slightly used set for around $300, while the Cobra King Tour MIM irons will set you back $1,300 in brand new condition. If you want the best bang for your buck, then the choice is pretty clear to me. They are very similar irons sets with very different price tags.