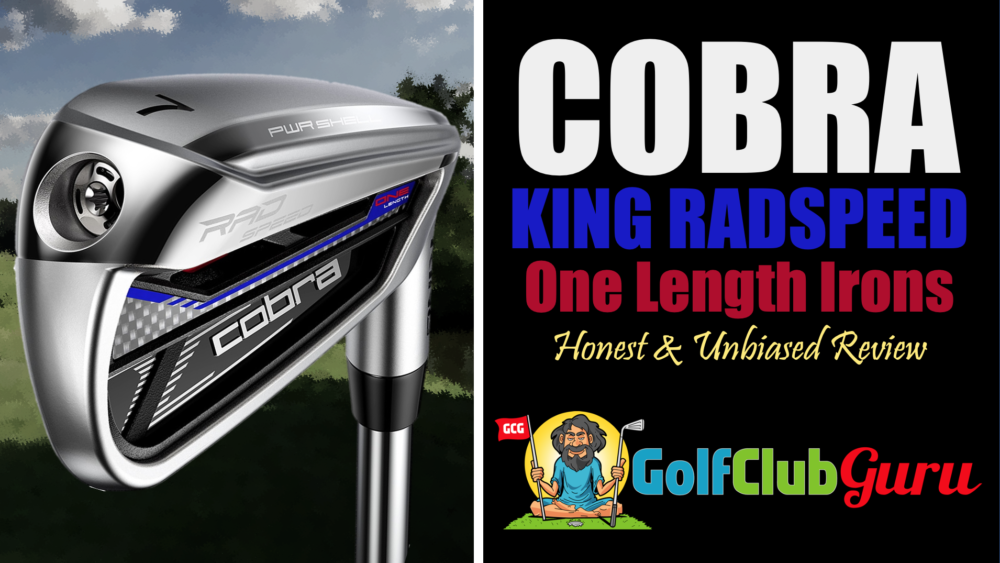 I’m actually a big believer of “one length” iron sets. I think they should be far more common and popular than they currently are. The main reason that I like them is because it makes long irons way easier due to the shorter than average shafts. If you are like me, you really struggle with consistency with your long irons.

Are One Length irons completely necessary? Absolutely not. Golfers have lived without them for centuries, and it hasn’t held anyone back from playing great golf. But if you want to make a big change and see if something sticks (especially with long irons), then take the plunge and get a set of one length irons like the Cobra King RADSPEED One Length iron set.

Let’s jump into our honest review.

I absolutely love looking at the majority of golf clubs. I can’t say that’s the case with the Cobra King RADSPEED One Length irons. The ugly carbon fiber topline is distracting from an otherwise beautiful club head. There isn’t a huge, chunky topline on this set like you might find on other game improvement irons.

However, the topline just draws so much attention and makes the topline look bigger than it really in in my opinion. Cobra doesn’t agree, but they are the ones that want to sell you the irons. I’m just here giving an honest, unbiased review.

Besides the topline, I really like the design of this set. The red/blue color scheme of the One Length set is far better than the regular RADSPEED’s yellow in my personal opinion.

You can tell that the weight is positioned very low on the club face. A design like this is very indicative (wow I have never typed that word before) of a forgiving, high launch design.

Performance is going to differ based on who is holding the club. I hope everyone is well aware of that. Typically, it’s the indian, not the arrow, and this set of irons is no exception.

In GENERAL, though, this is a very forgiving set of irons. Very oversized sweet spot, and a very low center of gravity design to further add to the overall forgiveness. The low-positioned weight also makes the golf ball fly off the club face high from the start. If you struggle with getting enough height on your shots, you’ll be pleasantly surprised by this set.

These irons are very long compared to other sets… they BETTER BE, as their lofts are stronger than most iron sets out there. The average modern 7 iron loft is 32 degrees. The 8 iron of the Cobra King RADSPEED One Length iron set is 32 degrees.

So, basically every club is one-club-longer than the average iron, based solely on loft and nothing else. Keep in mind: if you are comparing this set of irons to your current set of irons, then compare the two based on LOFT, not the number on the bottom of the club.

As a “One-Length” iron set, you may find that you gain a decent amount of consistency compared to traditional, variable length irons. Basically, with One-Length irons, the short iron shafts are slightly larger than average, and the long iron shafts are slighter shorter than average. Shorter shafts are easier to hit than longer shafts, but they go slighter less far distance wise. Typically, I recommend one-length irons for anyone that loses lots of strokes due to a poor long iron game. However, I also recommend that this group of golfers have multiple hybrids as well.

Pros & Cons Of This Set of Irons

No set of irons is perfect. While Cobra won’t tell you the cons of their irons (for obvious reasons), I will. Thanks again for reading my unbiased review.

Who Should Buy Cobra King RADSPEED One Length Irons?

You should buy the RADSPEED One Length irons if ALL of the following is true..

If all of these things are not true, then there are probably better options out there for you. Let me know your current situation (and budget) in the comment section below and I’d be happy to recommend you a set of irons.

As a brand new release, the Cobra King RADSPEED One Length iron set is priced at the top of the market. To save money without sacrificing quality, just go back a few models.

Personally, instead of the RADSPEED One Length, I’d instead buy the Cobra King F7 One Length Irons. Both sets are long, forgiving, and have one length shafts. The F7 One Length irons are more appealing (no ugly toplines), perform just as well, and are far less expensive.

The RADSPEED One Length will cost you $900 brand new, while you can buy a slightly used set of F7 One Length for like $250 if you are patient enough. The F7 One Length irons are the best value option. The best bang for your buck, you might say!