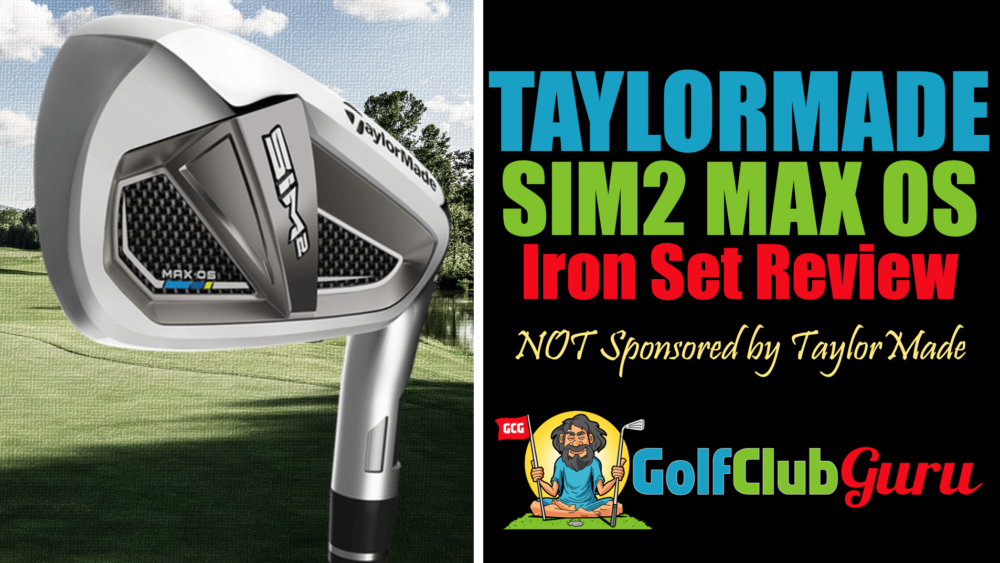 Many iron sets like to claim themselves as the “longest and most forgiving” iron sets ever made, just like the TaylorMade SIM2 Max OS Irons.

Why? Because the majority of golfers NEED the extra forgiveness on mishits and WANT the extra distance for ego purposes.

Unfortunately, people still irrationally want to hit the ball further, even with their irons. So what did companies do? They try to make the golf ball travel further off the iron’s club face. At some point, companies have hit a stand still. They have optimized club faces, reduced the weight of club heads, and added ball speed features. There is nothing (under USGA regulation) that is going to make a significant difference anymore.

So what is the new trend? Well, it’s really simple. These companies are now taking an old 7 iron and stamping an “8” or maybe even “9” on it to trick golfers into thinking they gained distance. We call that “strong lofts”, AKA “tricking naive golfers into buying overpriced clubs that boost your ego and nothing else”. You can refer to them either of the two ways.

And with that blunt introduction, I’d like to introduce the TaylorMade SIM2 Max OS irons. They have really, really strong lofts.

The club heads of the TaylorMade SIM2 Max OS irons are, as the name suggests, oversized. Larger toplines, larger club faces, larger soles, and more offset. An oversized design essentially makes the sweet spot larger to allow for a larger margin of error on your iron shots.

Some guys like thick girls, while others like skinny ones. I think it’s safe to say that is a fact. The same is true with irons.

There’s no need to sugarcoat here. This is an honest review, and I intend to always keep it that way.

These irons are super long and forgiving. If you are comparing your current irons to these, I’m sure that you will notice a big increase in distance, and probably a small increase in forgiveness. It depends on what irons you are currently gaming, obviously.

However, keep in mind that we need to get down to the source of these improvements. I’ll do it for you:

Irons like this are meant for distance and forgiveness. That’s it. They are bad in practically every other category that you can think of. It’s important that you keep this in mind before you purchase. The TaylorMade SIM2 Max OS irons have poor feel, poor workability, and terrible distance control.

If you are looking for a set of irons that will help you grow into a mid to low handicap golfer, this isn’t what you want. This set, if anything, will hold you back from quickly improving your ballstriking due to the extra forgiveness. Before you make a big purchase like this, consider what kind of golfer you are going to be in 2-3 years. Will you outgrow these irons before then? If so, then you might as well go ahead and make the jump to a less forgiving iron that will help you improve quicker anyway.

Who Should Buy The TaylorMade SIM2 Max OS Irons?

You should buy these irons if ALL of the following is true:

TaylorMade released the Max irons and the Max OS irons together. Want to know the differences? Of course you do.

In general, these are the exact same clubs, except for two minor differences:

A similar performing set of irons that will cost you far less is the Callaway XR OS irons. The XR series from Callaway is one of my favorite series of clubs to recommend. 6 years after the release, they still offer all of the performance that you’ll need but without the hefty price tag.

Like the TaylorMade SIM2 Max OS irons, the Callaway XR OS irons are oversized to add lots of forgiveness on your mishits. While they are not as strongly lofted as TaylorMade’s irons, they are still super long.

While the TaylorMade irons sell for $800, the Callaway XR OS irons can be picked up for $250 in excellent condition.

New TaylorMade irons are NEVER a good value option. The prices are high for the first 6 months and then fall off a cliff when the new clubs are released. So, if you are going to buy TaylorMade golf clubs, I’d highly recommend that you wait 2-5 years after the clubs are released to buy them. That way, you get the benefit of current technology, but the prices are often 1/4 the price of the original MSRP. Irons that sell for $1,000 today can generally be bought for $250 in great condition 5 years down the road.