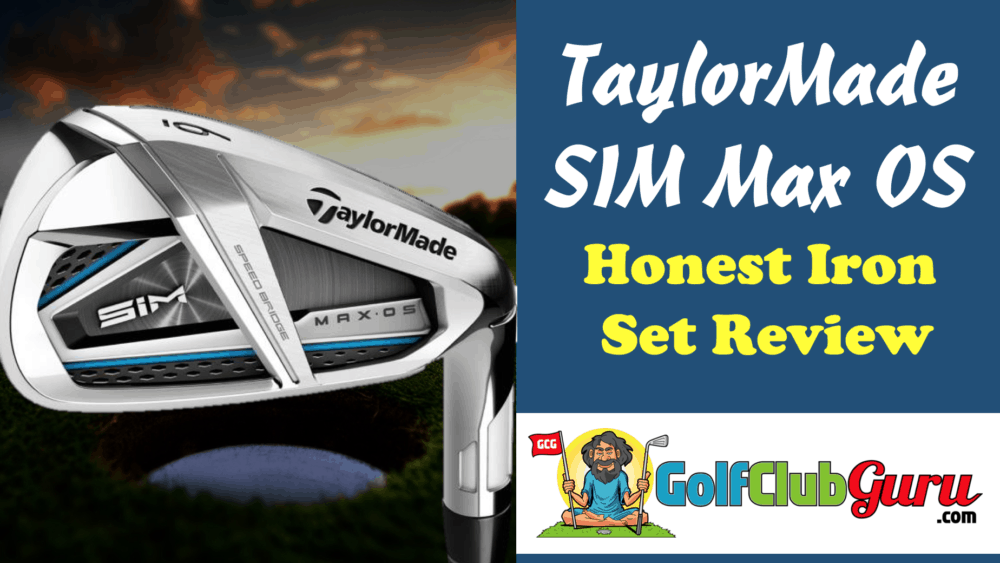 TaylorMade redefined their previous M5 and M6 line with the all new SIM line, short for Shape in Motion.

The TaylorMade Sim Max OS iron set looks extremely easy to hit at address.  The irons feature a thick top line and wide sole designed for distance and speed. Upon inspection, the most interesting aspect is the Speed Bridge on the cavity of the iron which runs from the middle of the top line down toward the toe.  The Speed Pocket, a staple in TaylorMade irons for several years, is noticeable on the sole just behind the club face.  The black ECHO Damping System is visible at the base of the cavity with a nice charcoal, silver and blue color contrast plate located in the cavity.

The TaylorMade Sim Max OS is loaded with technology designed to make it one of the easiest irons to hit while adding plenty of distance.  The Speed Bridge supports the topline of the club allowing more distance and forgiveness with an improved sound and feel.  In addition, the ECHO Damping System improves the feel by eliminating vibrations for smoother contact.  The Speed Pocket located on the sole maximizes stability in the club face for increased ball speed and forgiveness.  TaylorMade designed the Sim Max OS with their Ultra-Thin 1.5 mm face and Progressive Inverted Cone Technology for larger sweet spot and a draw bias in the longer and harder to hit irons.  Finally, TaylorMade designed the Shape Design with a wider sole and lower center of gravity for higher ball flight and unmatched combination of distance, forgiveness and playability.

TaylorMade offers several shaft and grip offerings at no upcharge, however the most basic stock shaft is KBS Max 85 available in Regular (91 gram) and Stiff (93 gram).  KBS Max 85 is a high launch and spin shaft meant to get the ball up in the air quickly.  Ventus Blue is the stock graphite offering available in Lite (A) flex (56 grams) Regular flex (66 grams ) and stiff flex (76 grams).  All three offerings are high launch shafts.  The Lite flex (A) is high spin while Regular and Stiff are mid-high spin shafts.  The stock grip is Lamkin Crossline 360.

The Max OS provides a larger sweet spot and they are incredibly long.  Balls jump off the clubface with a trampoline effect.  In addition, some of the off-center hits don’t feel drastically different than the center of the club face.  Probably the biggest surprise is the irons felt a little softer than I was expecting.  When you think of game improvement distance irons you picture expect firm contact.

When I say balls jumped off the face, the average ball speed was 122.4.  In comparison, the P790 was only 116.5 mph ball speed under the exact same testing conditions.  Carry distance was unbelievable for a 7-iron with an average of 181 and the farthest shot traveled 186.2 yards.  That is almost 20 yards longer than I hit my personal 7-iron.  The average launch angle was 17.6* and 4900 RPM backspin.  The irons are so forgiving shots traveled with the slightest draw and side spin average of 118 rpm.  TaylorMade delivered the answer for players looking for distance and forgiveness with one of the longest and easiest irons I have ever hit.

Lower Priced Option for Those On a Budget

If you are on a budget like we are, check out the Callaway XR OS irons. It’s a set that is EXTREMELY similar to the TaylorMade SIM Max OS irons, but at half the price currently.

As previously stated, TaylorMade Max OS irons create incredibly fast ball speed while offering more distance, forgiveness and solid feel.  Low handicap players are probably looking for more workability in the irons, however, mid to high handicap and players with slower swing speeds are the main demographic.  TaylorMade also offers the regular SIM Max irons in addition to the Sim Max OS.  TaylorMade Max OS steel irons retail at $112.50 each or $899.99 for a set of 8 irons and $125.00 each for graphite or $999.99 for a set of 8 irons.  This is directly in line with similar models from competitors and a very reasonable price tag for the irons.