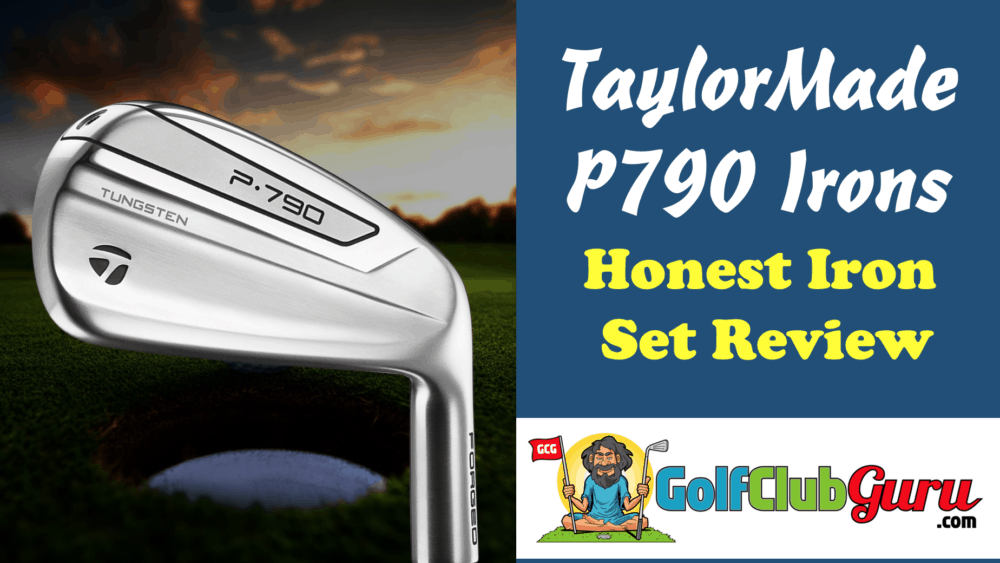 TaylorMade P790 is one of golf’s hottest irons on the market today.  Since the release a few years ago, their popularity skyrocketed.  In fact, they were so popular, TaylorMade could not meet the demand and many customers waited several months to receive their orders.

TaylorMade helped set the stage for distance irons that look like players irons.  TaylorMade had a huge task to improve on one of the most popular irons in the golf so let’s take a look at the latest release of the TaylorMade P790 iron that was updated with a new release in the fall of 2019.

TaylorMade P790 is known for their player’s iron design.  It looks like a blade with a slightly larger top line and sole.  P790 looks attractive with a brushed and polished chrome finish.

The toe weight is visible of the P790 badge, however, positioned slightly lower than the previous model.  Speedfoam is injected into the toe where the screw is visible.  The irons have a fairly squared off look at address with minimal off-set.  The speed channel is visible on the sole and the back of the iron has a few black accents and updated “T” TaylorMade logo that differs from the original P790 iron.

Visually, the 2019 P790 version is not drastically different than the 2017 model.  They look is fantastic and easy to see why players of all ability levels are intrigued by this new style of iron.

P790 irons are known for their hollowed out design with an ultra-light urethane Speedfoam injected inside the club head for faster ball speeds and better feel.  TaylorMade created a thinner progressively forged face that improves accuracy and maximize COR on the face.  The long irons use TaylorMade’s patented Speed Pocket for more consistency and forgiveness while the short irons forgo the Speed Pocket.  Finally, TaylorMade positioned a low profile tungsten weight that lowers center of gravity ultimately creating a higher launch angle.

TaylorMade offers the mid launch and spin True Temper Dynamic Gold 105 VSS is the stock shaft for steel.  DG105 VSS is available in regular, stiff and x-flex.  The graphite offering is lightweight UST Recoil 780 with SMACWRAP designed for a mid-high launch and mid spin ball flight available in lite, regular and stiff.  TaylorMade’s stock grip is Golf Pride Tour Velvet 360.  If this is not the correct match, TaylorMade offers several additional shaft and grip combinations at no upcharge.

P790 feels great at address, the balance between head and shaft felt great.  TaylorMade’s P790 proved to be the most consistent performer compared to the other models tested, including Cleveland UHX, Cobra Forged Tec and Ping i500.  Carry distance is impressive where the shortest hit went 172.3 while the farthest shot traveled 174.4.  P790 allowed for a consistent and repeatable pinpoint distance control.  In addition, shots traveled very straight with slight draw.

Shots traveled with minimal side spin with an average 392 RPM.  Shots launched around 19* with a fairly average low backspin of 4460 RPM.  Although the spin was low, the average peak height was  32.7 yards with an average descent angle of 45.8*, meaning shots still have the ability to stop quickly on the green.

The Speedfoam offers a unique softer feel compared to the other hollow iron heads.  Impact feels crisp across the entire club face with a slightly muted sound.  However, you can feel where you strike the club face, including toe hits that still fell within the 1.9 yard range of carry distance.  Results are impressive since lofts and standard length are not overly strong.

Better on a Budget

If you don’t want to shell out $1,000, you aren’t alone. We like to keep our entire bags under $500 when possible, so an iron set around $250 is a common goal among budget-focused golfers. If that sounds like you, consider the TaylorMade Tour Preferred MC irons. They were released about 6 years ago, and the entire Tour Preferred set was extremely popular and well received.

Just like the TaylorMade P790, the Tour Preferred MC irons have thin toplines, incredible feel at impact, and great distance control. Both are players irons that will perform extremely well when hit on the center of the club face. When it comes to saving $750, we strongly recommend passing on the P790 for now. Maybe wait 5 years and pick them up when they fall 75% in price.

After hitting the irons I’m very impressed with the feel, consistency and performance.  They should appeal to a broad range of players and ability levels.

TaylorMade offers a few other irons in the P lineup, including P790 UDI and P790 TI.  P790 UDI is a 2 iron version available with HZRDUS Smoke shaft in stiff and x-stiff and retails for $229.99.  It is a smooth transition for the P790 set and could serve as an alternative to hybrid or even higher lofted fairway wood.   P790 TI is a newly engineered club with new materials, faster ball speeds and more distance.  The TI irons retail for a steep price of $2449.99.