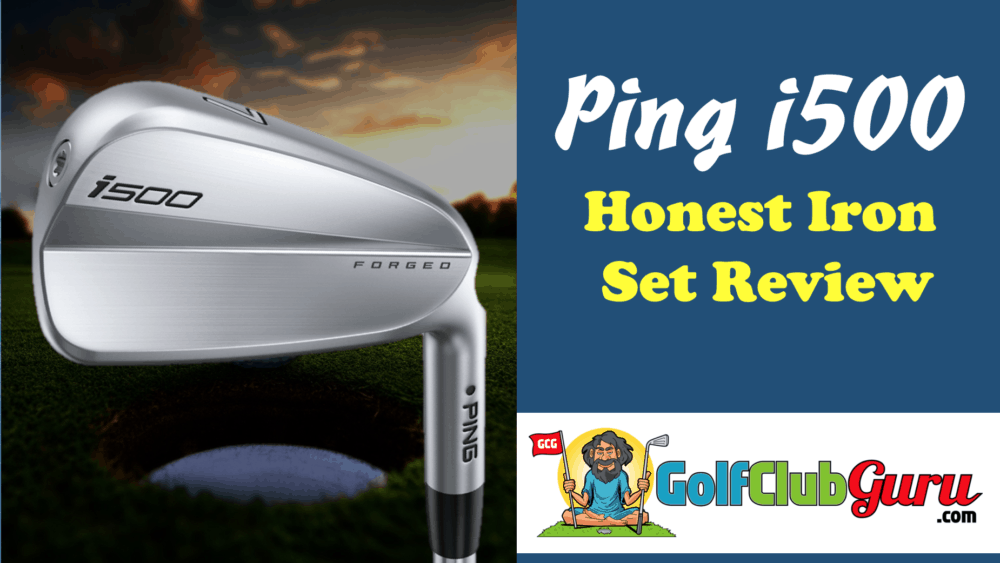 Are Ping i500 Irons Worth The Price?

Ping’s intention in designing the i500 is create an iron that launches high, goes far, feels great and looks like an iron good players want to play.  Following the launch of several hollow body distance irons Ping launched the G700 followed by the i500.  The G700 is a Game Improvement category while the i500 falls in line of a forgiving better player iron that offers more distance.

Visually, the Ping i500 irons looks fantastic.  Ping designed a players iron that looks like a distance iron.  The top line and sole are noticeable thinner in comparison to TaylorMade P790, Cleveland UHX and Cobra Forged Tec.  In fact, any low handicap player will probably visually prefer the compact design of i500 over the other slightly larger club heads.  Ping also designed the i500 with very little off-set, another attractive feature for the low handicap players.

The appearance is also very bland and simple without any extra bells and whistles visual.   There is a small weight in the toe and the back of the club displays two images, i500 and Forged.  Other than the images, it is a straight forged iron.  The classic chrome finish works for a stunning look on the i500 iron.

Ping utilizes a forged c300 steel face merged with a 17-4 stainless steel body for faster ball speeds combined with longer and higher traveling shots.  The result is the ability to stop the ball quickly while attacking pins.  Ping claims the HydroPearl Chrome 2.0 Finish helps deliver consistency and distance from any condition, including the rough and wet conditions.

The Ping i500 iron set is available in 18* 3-iron through 45* PW and 50* Gap Wedge.  The specs line up very closely with the P790.  The standard 7-iron offers 30.5* loft, 37” long and 62* lie angle.  Ping is around 1-1.5* flatter standard lie angle than most other companies. The standard swing weight is D1 through the entire set.  Ping offers a PowerSpec Loft option where the lofts are strengthened up to 2* an iron and a RetroSpec Loft option where lofts are weakened 2* per iron.  PowerSpec and RetroSpec options alter launch, spin and distance characteristics for a custom desired performance.

Ping offers several shaft options, however, the Dynamic Gold 105 is probably the most popular stock offering.  DG105 is available in 95 gram R300 and 97 gram S300.  DG105 is designed to produce a mid to high launch angle. The UST Recoil ES SmacWrap is a lightweight stock graphite option.  The F2 Lite Flex is 59 grams, F3 Regular Flex 73 grams and F4 Stiff Flex weighs 78 grams while all three options produce a high launch.  While other select grips are available at no upcharge, the stock offering is Golf Pride Tour Velvet and Tour Velvet Cord.

The i500 produced comparable ball speeds to the other hollow body irons available.  However, the i500 produces a slightly higher launch angle at 20.5 in comparison to the other models tested.  Launch is fairly similar with all hollow body irons with only a 2* differential.  In addition, the spin rate was slightly higher than competitors.  I really liked the ball flight and performance of i500, however, the carry distance was noticeably less at 170.2.  Carry distance is farther than my current irons.  Shots were consistent with a slight draw and minimal side spin.  Overall, impact feels solid and produces a muted sound.  You can really sense the hollow feel when striking the i500.  Hitting a few additional shots, I tested the playability of the i500 and enjoyed the ability to flight the ball for different shots.

The Ping i500 irons are hard to compete with. However, we think Ping’s S55 iron set is pretty dang similar. Both have thinner toplines, great distance control, and decent distance. The main difference is that the i500 irons are forged, while the S55 are cast. However, Ping cast irons are pretty well known as the best cast irons on the market.

When it comes to nearly a $700 difference in price, the Ping S55 irons just make more sense, especially if you can find a set in good condition. Considering that Pings are known for being the most durable brand in irons, that shouldn’t be too difficult.

In my opinion, the i500 is the best looking hollow body iron available.  Visually, it will really appeal to the lower handicap players and offer additional forgiveness and distance from a traditional players iron.  In addition, I prefer the versatility of the smaller sole for knock down shots while versatile enough for specialty pitch and chip shots around the green.  This probably isn’t the iron if you only want distance, but it’s a solid transition from a blade to distance iron.  The i500 also offers some interesting possibilities of creating a combo set with other irons in the Ping lineup.  I could see a player using the i500 in long irons and maybe transitioning into an i210 or iBlade in the mid and short irons.