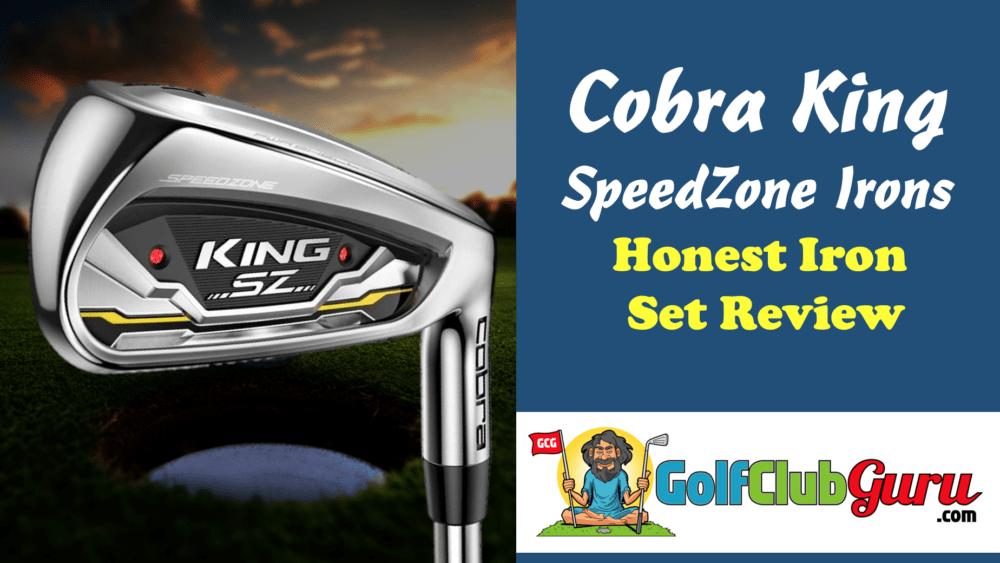 Are Cobra King SpeedZone Irons Worth $800?

The new Cobra King SpeedZone irons are the next generation of irons replacing the popular F9.  SpeedZone features some new technology helping boast Cobra’s claim of maximum speed, power, and forgiveness. But are they worth $800? Here’s our honest review!

Cobra King SpeedZone irons offer plenty of confidence at address.  The thicker top line and sole frame the ball nicely.  The most interesting aspect is the checkered appearance of the carbon fiber top line. In addition, the club features a milled face across the hitting area.  The back of the club displays the medallion designed to improve sound and feel.  The cavity of the iron shows a black weight with “King SZ” written in the middle.  There is a small undercut slot at the base of the cavity, during practice swings you actually hear a pronounced “whoosh” sound.  Finally, there is a black and yellow line in the cavity across the top of the club under the carbon fiber top line.

Cobra SpeedZone irons are available in 19* 4-iron through 54* Sand Wedge.  The set features stronger lofts with the 7-iron measuring 27.5*and 63.5* lie angle.  When purchasing a set of SpeedZone irons make sure to take account the grip and length.  Standard length is 37.25” for a 7-iron, however, clubs with Cobra Connect Grip add .25” for 37.50” standard length.  SpeedZone irons weigh in at D1 for steel 4-9 irons, D2 PW and GW while SW weighs D3.  Graphite is a little lighter with D0 swing weight for 4-9, D1 for PW and GW and D2 for SW.  The entire set make up is available for right and left-handed players.

SpeedZone stock steel shaft is the KBS Tour 90 available in regular and stiff flex.  The 95 gram regular and 102 gram stiff flex are both meant to create mid-high ball flight.  The stock graphite offering is UST Recoil 460 ESX available in 63 gram Lite (F2), 65 gram Regular (F3) and 67 gram Stiff (F4).  Lite and Regular flex are designed for mid-high launch and mid spin while the Stiff flex creates high launch and mid spin.  The stock grip is Cobra Connect Lamkin Crossline grip.  Cobra Connect Arrcos grips and App offer many benefits, however, my favorite is the ability to track how far you really hit each club eliminating guesswork of distance control.  If you go through a fitting, Cobra offers several other steel and graphite shafts with alternative grip choices at no upcharge.

Cobra King Speedzone irons are incredibly easy to hit and they are LONG!  In comparison to the Forged Tec, they launch in a more traditional 7-iron launch at 18.2* (Forged Tec were higher).  Ball speed is fast with an average 120.1, a full 5 mph faster than the Forged Tec under same testing conditions.  Players looking for distance should gravitate toward the SpeedZone with an average 7-iron carry distance 179.2 yards, over 10 yards longer than I hit my personal 7-iron and 8 yards longer than I hit the Forged Tec.  Spin rate was around 4500 rpm and side spin was an average of 378 L, meaning my shots were a slight draw.  Side spin is a great indicator of how much curvature in ball flight, so the smaller the number the better.  Contact feels firm and crisp.  You can feel where contact is made on the club face, however, the ball still goes forever and on the intended line.  I caught a few shots toward the toe and was surprised how far and straight the shots still went.

Truthfully, we don’t think the Cobra King SpeedZone irons are worth the $800. Sure, it’s a great set of irons and less money than most newly released sets on the market. However, there are simply too many other great sets out there which are far less expensive that perform just as well.

Our better priced recommendation would be the Cobra Max irons. Just as forgiving and long as the SpeedZone irons, but around $550 less expensive. Take that saved money and get a proper fitting or some lessons from a PGA instructor.

Cobra King SpeedZone is prime for a mid to high handicap player or someone looking for more distance.  SpeedZone is extremely easy to hit and probably Cobra’s longest iron available.  This is a perfect fit for the recreational player just looking to enjoy the game a little more.  King SpeedZone irons with steel shaft retail at $112.50 each or $799.99 for a set of 7 irons while stock graphite retail at $128.57 per iron or $899.99 for a set of 7 irons. The price is very fair and directly in line with other competitor models such as Callaway Mavrik, TaylorMade SIM Max and less than the Forged Tec. However, there is always room to save money.