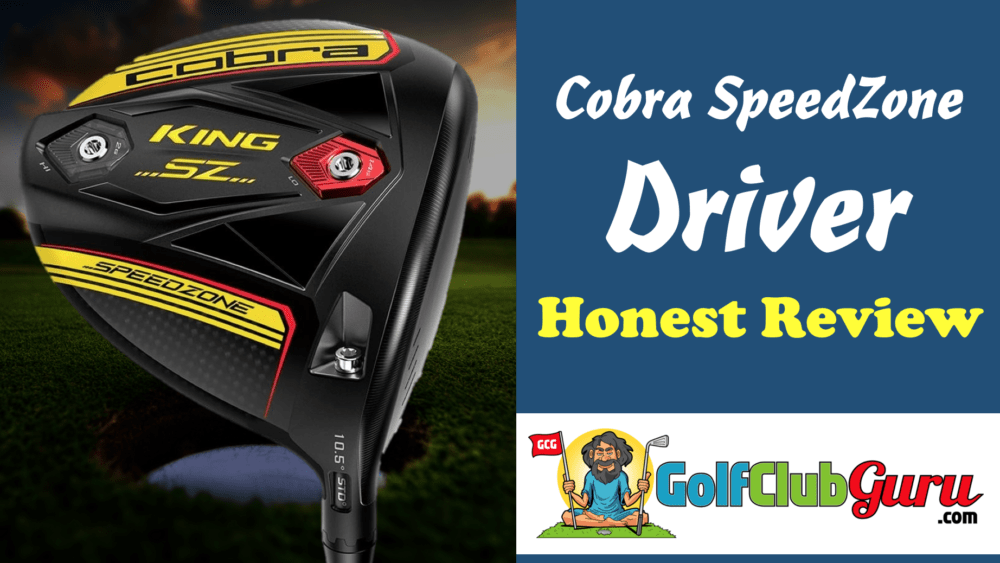 A Detailed Review of the Cobra SpeedZone Driver

The time has come for Cobra to replace the F9 with their new King SpeedZone lineup.  The driver is available in two club design options, SpeedZone designated for 0-10 handicaps while the SpeedZone Xtreme is partial to 10-25 handicap range.

Finally, inspired by Rickie Fowler, Cobra offers a shorter Tour Length version of the SpeedZone driver.  The King SpeedZone driver presents a unique look and design for the player who likes to work the ball without sacrificing forgiveness.

The SpeedZone driver has a traditional driver shape with two distinct finishes, gloss black with yellow and red trim or flat black with white and red trim.  Personally, I like the different finish options compared to the previous F9 where it was the exact same club and finish, except for the white and yellow trim.

Cobra’s ability to mill the driver face and allow it to wrap around the face is the most interesting aspect of the driver.  An infinity sign is milled into the center of the face.  Cobra placed an alignment aid logo just beyond the milled face.  Yellow and red trim (or white/red) help frame the driver and visually make it appear smaller and more aerodynamic.

SpeedZone offers two moveable weights on the sole that run directly down the middle, one placed in front behind the face and the other in the rear.  The aerodynamic appearance is again on display on the sole with yellow (or white) stripe and red trim running on either sides of the weights from front to back.

Overall, the appearance looks sharp and the CNC Milled Face is a conversation starter for anyone who picks up the driver.

Cobra designed plenty of tech in the new SpeedZone driver beginning with the CNC Milled Infinity Face in an attempt to create faster ball speed.  The Titanium T-Bar Speed Chassis creates a stronger frame for more stability and improved feel.

The 360 Carbon Wrap Crown covers half the club, adds stiffness and saves 25 grams of weight.  Saving weight allows Cobra to lower the CG with Speedback Weighting with 69 grams of mass positioned low for high launch and low spin.

The Cobra SpeedZone driver is 460 cc head and available in 9* and 10.5*options.  The driver offers an adjustable clubhead design with 8 different loft positions including + / – 1.5 degrees and draw bias positions.

The standard length is 45.50” with the Cobra Connect Grip while other grip choices shorten the club to 45.25”.  Inspired by Rickie Fowler’s 43.50” driver, Cobra also offers a SpeedZone Tour Length in 44.50”.  The standard swing weight measures between D1 – D4.

I chose the Tensei Blue shaft since that is the same shaft I play in my own driver so it’s eliminating some variables in equipment testing.  I hit a few shots with my driver, 12* Callaway Epic Flash with Blue Tensei stiff ($549.99 retail), to establish a baseline.  I know my absolute best hits reach around 260 yards carry distance.

Impact feels very good across the entire face and produces a dull sound.  In fact, the sound is softer than many other drivers on the market.

Ball speed averaged 145.9 mph, with the highest reaching 150 mph.  SpeedZone produced an average 11.7* launch angle, slightly lower than a desirable range of 13*-15*, but that has to do with my swing tendency, not an issue with the club.  The highest launch was in range at 14.2 while lowest was only 9.6*.

Personally, I would need to adjust the loft or look at the SpeedZone Xtreme, which offers a 12* clubhead option.   The backspin with SpeedZone was fairly neutral and consistent with an average 2502 RPM average and low 2158 RPM and high 2977 RPM.  It was lower than the average RPM in my current driver.

SpeedZone is very forgiving, I was impressed with the lack of ball flight movement, shots went extremely straight (minus a few pushes) with only 109 RPM average side spin.  Distance was consistent with an average 244.7 yards of carry distance and 267.6 projected overall distance.  Overall, the club tested well and the biggest benefit is the forgiveness and lack of side spin.  I found the SpeedZone to be straighter than I was expecting.

There is not much different between the original SpeedZone and the SpeedZone Xtreme drivers. The key thing to remember: the Xtreme is “xtreme”ley  forgiving. It has a moveable weight that can changed to closer to the face or further back on the sole of the driver head. Other than that, the only differences are the paint job and the head shape. Both have 460cc heads, but the Xtreme looks bigger and more forgiving at address. Oh, and the Xtreme is also available in a 12 degree loft for slower swing speeds to optimize distance, unlike the original SpeedZone.

$450 is a lot for a new driver. Although it’s the norm these days, that doesn’t mean you have to follow the crowd. This website is focused on finding the best value equipment on the market, no matter what golf companies say about how great their latest releases are.

If you are looking for a better value alternative, consider the Cobra King LTD Pro driver. Although most “Pro” models are harder to hit than the originals, the Cobra King LTD Pro is very easy to hit. It’s also long and feels INCREDIBLE at impact. At a price tag of about $130 in slightly used condition, you can’t go wrong. Hell, you could buy three of them (one for your bag, one for your backyard, one for your living room in front of the mirror?) and still save $60 compared to the Cobra King SpeedZone. Or, you can take your savings and invest in lessons or a professional club fitting (we’d recommend this option).

Cobra King SpeedZone is positioned extremely competitive at $449.99, basically $50 to $100 less than any of the major competitors.  Combined with a great look and solid performance Cobra is in primed for a big year.

Visually, the club looks great and performs well.  I know going through the fitting process you could really get the loft, shaft, launch and spin rates dialed in.  Cobra King SpeedZone is definitely a contender and should at least be on your radar for great value and performance in 2020 drivers.