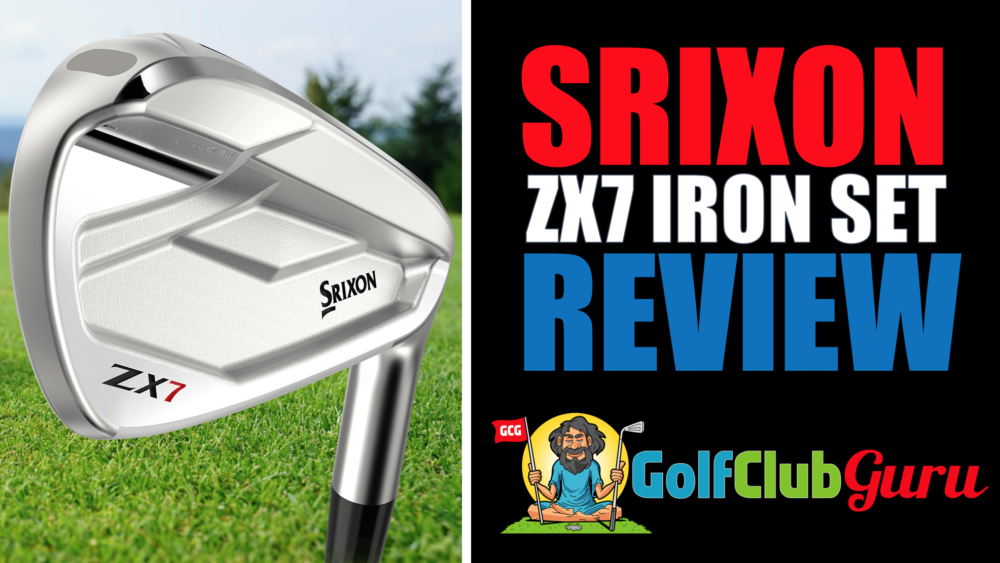 Srixon doesn’t get the credit that they truly deserve, especially when it comes to forged iron sets like the Srixon ZX7. In the US, many golfers have never hit a Srixon club before… heck, many golfers have probably never even heard of Srixon in the US. Overseas, though, the brand is far more popular, especially in Southeast Asia.

If you don’t know much about Srixon, let me tell you quickly why I really like them. Besides their high quality clubs, they don’t oversaturate the golf equipment market with new clubs multiple times a year. Actually, they typically release clubs every TWO years, which is more in line with awesome brands like Titleist and Ping, unlike TaylorMade and Callaway.

That’s enough of an intro for this article, don’t you think? Let’s dig into a truly unbiased review of the Srixon ZX7 iron set.

If you want a compact, blade-style iron with a TOUCH of forgiveness, then the Srixon ZX7 irons are a great match for your game.

Compared to other blades on the market, the clubs offer a little more perimeter weighting and a slightly larger topline than most. Surprisingly, the topline of the ZX7 and the game improvement model ZX5 have the same width topline, which is rare.

Srixon makes excellent performing irons for golfers of ALL skill levels – from beginners to professionals. However, this set is only a good match for two types of golfers:

The Srixon ZX7 irons are an update to the older model from a couple of years back, the Srixon Z785 set. Again, big fan of the fact that Srixon only releases new clubs every other year.

One sentence summary: The Srixon ZX7 iron set is a great mix of forged feel, control, and a little bit of forgiveness for those that don’t quite want a full on blade set.

Appearance: The Srizon ZX7 irons look like a “chunky” set of blades, to put it best. There’s not much perimeter weighting, but more-so than most blades. The toplines aren’t huge, but again they are thicker than on most blades. Srixon actually made the toplines of the ZX7 and the game improvement model ZX5 the same thickness, which is very uncommon.

Thankfully, there is very little offset at address, which is common for most players irons and blades.

Performance: The Srixon ZX7 is an awesome performing set of irons, as long as you can consistently hit the center of the clubface. Off center strikes will be punished, but not NEARLY as bad as less-forgiving blades on the market.

I think that you will struggle to find a players iron with this much forgiveness. Keep in mind that forgiveness is not typically something that is talked about among players irons. However, I know deep down that even better golfers want some sort of forgiveness on their off-days. You can’t and won’t always play well – let’s be real.

I personally think this is a great set of irons for golfers that want to upgrade from their game improvement iron without making a massive change.

Truthfully, there isn’t much different about the new ZX series of irons compared to the older Z series. The price difference is pretty significant, but the performance difference is hardly noticeable.

The main difference is a change/improvement in the groove pattern. They basically added more deep grooves for the shorter irons (PW-8) and made the grooves further apart and shallower for the longer irons (7-3). This should help with control on short irons and forgiveness on long irons.

Srixon also utilized some AI (artificial intelligence) for their club faces to improve ball speeds on off-center strikes, but I’m not much of a believer in scientific sounding words to convince buyers to spend thousands of dollars on new clubs. That’s just me.

If you want a direct comparison, you are probably wanting to compare/contrast the ZX5 and the ZX7 iron sets.

To put it in simple terms, the ZX7 irons are a players iron (for low handicaps), while the ZX5 irons are a “better” game improvement iron (typically for mid handicappers).

The ZX5 irons are more forgiving due to the extra perimeter weighting and thicker soles (more bounce at impact, less digging). ZX5 irons also have more offset hosels, so it’ll be easier to square the club face at impact.

The ZX5 irons are more forgiving, but won’t offer as much feedback and workability as the ZX7 irons.

Feel at impact and thickness of the toplines are identical between the two.

The ZX5 irons will fly a little longer, as they are stronger lofted by about 1 degree of loft per club.

The ZX5 iron club heads are a little bit longer, so they have a slightly larger sweet spot than the ZX7.

If you are like me, you probably don’t love the idea of spending $1,200 plus tax plus shipping just on a set of irons. Personally, I like to keep my entire bag under $400 or $500 total!

So, if you want to save some money, then consider picking up the previous models of the same club, like the Srixon Z585 or Z565. The Z585 set is only a couple of years old, but it’s practically the same club as the ZX5 but with a different design and color scheme. You can pick up a slightly used set for anywhere from $400-$900.

Personally, I’d recommend you find a good used set of either the Z585 or Z565 in good condition. Don’t cheap out too much as the grooves will probably be too worn out. You want your iron set to last you 5-10+ years if possible.

All of these 3 iron sets are players irons with a hint of forgiveness. You can hardly go wrong with any of them.