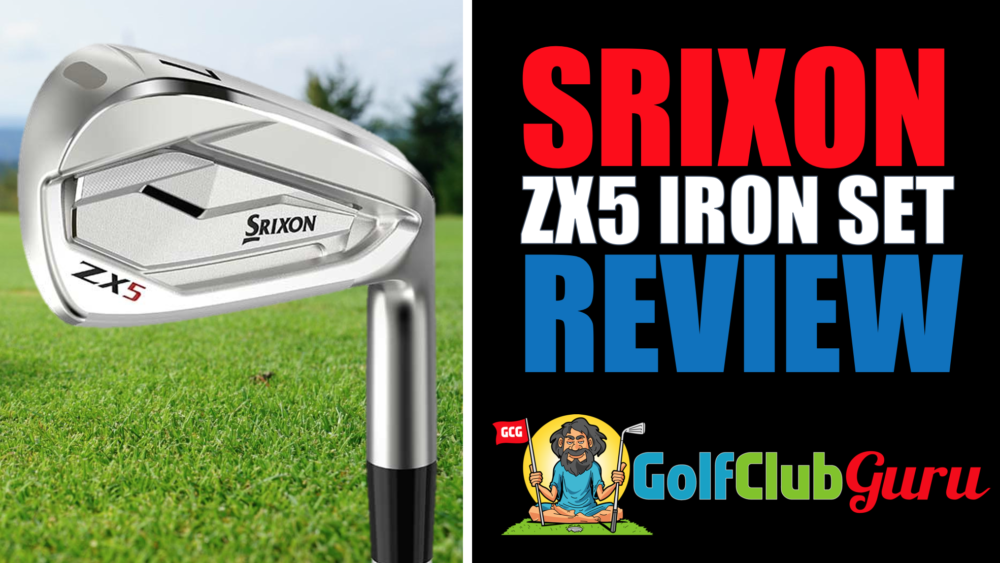 Without a doubt, Srixon is one of the most underrated brands in golf. Sure, their presence is much more appreciated overseas, but the US is still far behind (in my opinion) in trusting the brand.

A big reason that I like Srixon is that they don’t release tons of new models every year like other brands, which subsequently devalues the previous models immediately.

Anyway, let’s get to the main topic of this article: an honest review of the Srixon ZX5 irons.

Srixon makes great iron sets for all golfers – from the high handicappers looking for forgiveness, all the way to PGA pros looking for more control and feedback.

The ZX5 irons offer an incredible combination of forgiveness, distance, and feel for those looking to improve their ballstriking. I’d consider it a “better” game improvement iron. One that is perfect for those that want the extra forgiveness but also want a great feel/sound iron at impact, with plenty of feedback to improve your ballstriking quicker than a typical game improvement iron with hardly any feedback at all.

The ZX5 irons are an upgrade from the older Srixon Z585 irons from nearly 3 years ago. Like I mentioned before, I’m a huge fan of how Srixon only releases new clubs every 2-3 years, compared to 2-3 TIMES A YEAR like TaylorMade.

Sum it up in one sentence: The Srixon ZX5 irons are a long & forgiving, cavity back design that also incorporates incredible feel & feedback to improve your ball striking quickly.

Appearance: The Srixon ZX5 iron set looks awesome at address. If you are used to playing a normal game improvement iron, then you will be surprised at how small the topline of the ZX5 may look in comparison. This is what should be expected from a “better” game improvement iron. The thinner topline may take some getting used to, but keep in mind that you won’t be giving up much in forgiveness, and you’ll GAIN a ton of feel/feedback/workability on your shots.

Aside from the very little bit of offset on the irons, these look nearly like a players irons at address, which many will love (while some will be scared while standing over the ball).

Performance: Overall, this is a great performing iron set. You’ll struggle to find another game improvement iron set with this much feel/feedback on your shots, along with the obvious distance and forgiveness that mid to higher handicap golfers expect. If you are upgrading your current game improvement irons, but aren’t QUITE ready for a set of players irons, this is a great option.

On perfectly struck shots, you can expect very minimal sound and vibrations at impact (read: like butter). On poorly hit shots, you can expect to feel exactly where on the club face you made contact, which should help you in making adjustments needed to hit the center of the club face more often. As a result, a set of “better” game improvement irons like the Srixon ZX5 irons will absolutely improve your ballstriking faster than non-forged, bulkier game improvement irons.

Hopefully you know that this site HATES mumbo-jumbo technological terms that golf club manufacturers put out. No one cares about your AI-maximized-aerodynamic-hexagonal-inserted club face.

Here’s how the ZX5 irons are an upgrade to the older Z585 irons. To keep it simple, this is Srixon’s first time utilizing artificial intelligence to develop more ball speed across the entire face. However, Dustin Brekke, Srixon’s Director of Engineering, says that he is more focused on SMALL improvement with each release. Big fan. He doesn’t want to try to convince golfers that each new release is a MUST BUY set of clubs, when the previous set will still perform just fine.

Another change is the groove pattern. On the new ZX5 irons, there was a lot more thought put into the groove patterns. Lower lofted irons (3-7 irons) now have shallower grooves & less grooves to encourage higher fall speeds and slightly less spin. Higher lofted irons (8-PW) now have deeper grooves & more grooves overall to encourage more spin & control when you want it most (within 160 yards or so to the pin).

It’s always nice to be able to compare similar models of clubs. In this case, it makes the most sense to compare the ZX5 irons with their brother, the ZX7 irons.

The ZX7 irons are a players irons, while the ZX5 irons are a “better” game improvement iron. Those that consider themselves strong ball strikers (and those that WANT to be a better ball striker quicker) should go with the ZX7.

The ZX7 irons are slightly shorter in distance, due to an average of 1 degree more in loft per club (while some clubs have a difference of 2 degrees of loft like the 9 and PW). However, better ball strikers know that what number is on the sole of your club is useless as long as the loft-to-loft comparisons between clubs are the same.

The ZX7 irons have the same amount of offset at the ZX5 irons, but the ZX7 irons are slightly more compact with less perimeter weighting (less forgiving).

The ZX7 also have less bounce due to their smaller soles, while the ZX5 have wider soles that don’t dig into the ground as much at impact.

Ah, yes, the favorite part of every article: helping you find a better value alternative to the latest golf club release. The Srixon ZX5 irons are a great set of irons, but the $1,200 may be a little off-putting.

So, if you want to save a little while still buying a similar set of irons, consider the obvious choice: the older model Srixon Z585 irons for around $900. Or, if you are feeling extra frugal, why not consider the model before that, the Srixon Z565 from like 5 years ago for around $450 used.

So why not save some money and pick up the slightly older sets that will perform practically the same? That’s what I’m saying. Good luck my friends, and keep saving!