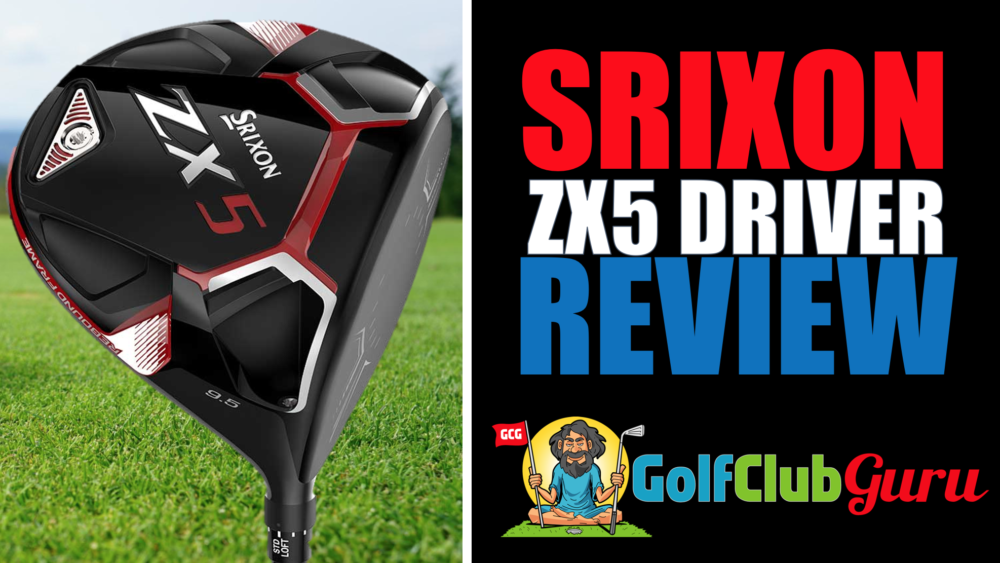 Srixon isn’t usually known for their drivers. They are far less common than better known brands, but their clubs are always highly reviewed. Plus, Srixon simply doesn’t release new drivers for no reason. They only release new clubs every two years, which can hardly be said about any other high quality brand in golf.

Srixon has a far more prominent international role, but they are becoming more well known around the states now, too. With Srixon quickly gaining popularity around the world, I wanted to take some time and honestly give my thoughts on the Srixon ZX5 Driver.

Let’s start with what you really want to know about the Srixon ZX5 driver.

It’s a heck of a driver, but I think there are far too many similar, less expensive drivers on the market to consider buying the Srixon ZX5 driver brand new.

The Srixon ZX5 driver is the driver for the everyday golfer. 95% (or more) of golfers will be better off with the ZX5 as opposed to the ZX7 due to the extra forgiveness and lower center of gravity.

The Srixon ZX5 has a traditional 460cc shape that just about every golfer is used to. It has a more “triangular” rear as compared to the more rounded rear of the ZX7, but the difference is so minimal that most golfers wouldn’t even notice.

The weight is focused back and rear on the club head, which is expected for a driver focused on distance and forgiveness.

When it comes to performance, the Srixon ZX5 driver is as forgiving as they come. Mishits still fly relatively straight and far, which is a huge benefit for the majority of golfers looking to hit more fairways.

I was truly surprised by the pleasant sound and feel at impact, as previous Srixon drivers that I’ve hit have sounded a little “clinky” at impact, which typically isn’t preferred.

Truthfully, I hate the fact that just about every driver is adjustable now-a-days. It causes too many golfers to blame their driver setup as opposed to get to the root of the problem: them. And their horrendous golf swing. However, an adjustable hosel (no adjustable weights) can definitely come in handy for quick adjustments and small changes to one’s driver setup.

The ZX5 driver comes with a fully adjustable hosel that will allow you to:

Srixon released the ZX5 and the ZX7 at the same time, so it makes sense to go ahead and compare/contrast the two to help you make the best decision for YOUR game.

The Srixon ZX5 driver is far more forgiving, as it has a larger profile head and larger sweetspot. The ZX5 driver head is 460cc, while the ZX7 driver head is This is a huge plus, as most golfers simply don’t hit enough fairways to score well. If you are deciding between a super forgiving driver and a super low-spin driver head, go with the forgiving one!

The ZX5 launches the ball higher due to the low center of gravity, while the ZX7 launches the ball lower and with less backspin. The ZX7 may sound better in this case, but the ZX7 is only beneficial if you are launching the ball super far with a fast swing speed. General rule: if you are getting the ball 280+ yards, you may want to check out the lower launching ZX7. If you don’t hit the ball roughly 280 yards or more, then you won’t generate enough club head speed to get the ball to travel far enough with a low launching head.

In general, both drivers will be pretty long. The ZX5 will fly higher and carry more, while the ZX7 will have a more penetrating flight with more roll time.

One major difference is that the ZX7 has adjustable heel and toe weights. That means that you can make it draw or fade biased by adding more weight to the toe or heel, respectively. The Srixon ZX5 driver, however, does not have this adjustability. Personally, I don’t like this adjustability anyway.

From the start of this website, I’ve sought out to be the most honest reviewer of clubs. I want to give you unbiased reviews, but I also want to save you money if I can help it. As a result, I’m always thinking about SIMILAR, LOWER PRICED options.

In this case, I truly can’t recommend that you shell over $500 of your hard earned money. Why not spend $150 and buy a slightly used driver that will perform just as well? For example, why not the Callaway XR16 driver? Truly a classic driver that has performed well for golfers for 5+ years now.

Like the Srixon ZX5 driver, the Callaway XR16 driver has an oversized head, an adjustable hosel, and a super low center of gravity to launch the ball high in the air. Considering that you can save yourself $350, it seems like a no brainer to me. But, hey, you do you.