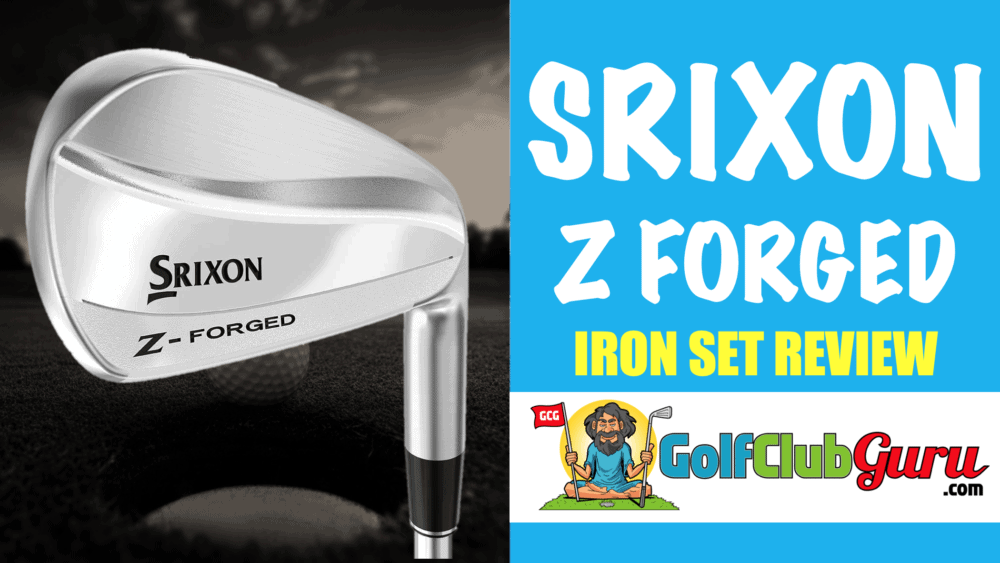 The Srixon Z Forged iron set is a player’s iron. Actually, it’s one step further – a set of blades. If you are curious about the Z Forged irons and wondering if they are for your game, you better be VERY CONFIDENT in your ballstriking ability.

The Z Forged irons could be one of the top three cleanest looking irons available on the market today. As most great players know, that clean look is going to cost a bit of money. Golf manufacturers know that great players demand precision. That precision is expensive to develop, produce, and bring to market. In this review, we will give you the full scoop on the Srixon Z Forged irons, and of course, you will get our better value recommendation in case you don’t want to spend the same amount of money.

The Srixon Z Forged is about as classic of a blade shape that you will be able to find on the market. If you like to work the ball and need that feedback on the clubface to be able to do so, the Srixon is an excellent option for you. Muscle back shaping is not forgiving. In fact, the forgiveness on this iron overall is going to be much lower than that of a cavity back or even just a traditional forged iron.

If you are a ten handicap wondering if it is time to go to a set of blades, you may consider doing a mixed set of Srixon irons. You can do the Z forged in the short irons, and then when you get up around that six iron switch to something that has a bit more forgiveness as part of its design.

The sole on the Z forged is a tour VT sole that has been proven to provide better turf interaction and cleaner impact. This is a forged club made with one single piece of 1020 carbon steel. This is soft steel and offers little to no vibration at impact. There is no question that the Z forged feel great when you hit them well.

If you like an offset look to a club, the Z forged is not for you. Most player’s irons are not nearly as offset as the game improvement irons. The Z forged is a progressive set, so the offset will increase a bit as you get to the three metal but it is still a minimal amount of offset overall.

The Z forged irons are still being produced by Srixon, so you can order them with a variety of different custom shaft options, but the stock option is a great choice. The stock shaft in the Z forged is the Nippon NS Pro Modus 3 Tour. This shaft is a very high performing option, and we find it surprising that more companies do not at least offer a stock option of their clubs with the Nippon shaft in it. The Z forged come standard with a Golf Pride Tour Velvet Grip.

As far as the loft is concerned, the Z forged have traditional lofting. This is a good thing for players irons as most players are not as worried about the distance as they are with workability and feel. If a true player needs a six iron or a seven iron, it really doesn’t matter. Whatever the necessary tool to get the ball close to the pin is all that matters.

It’s hard to find a brand new alternative for a muscle back iron that is going to come in too much cheaper than these Srixon irons. The one alternative that we do have for you has been around for many years, and your chances of finding it used in good condition is very high. That option? The Titleist 690MB irons. Old school – but still an awesome set of blade irons.

The Titleist 690MB are less forgiving than the Srixon Z Forged irons, but not by much. Blades are blades. There is hardly any difference between any blades in the past 10-15 years, truthfully. The main difference is stronger lofts. For example, a 7-iron has a loft of 36 degrees with the 690MB set but just 33 degrees with the Srixon Z Forged irons.

Our favorite thing about this set is the value. There are so many options out there, ranging from very used ($100) to hardly used ($400+). I played with this set of irons when I was playing everyday back in highschool. Incredible feel at impact. I grew more as a ball striker by using this set than when I used a cavity back design.

If you are borderline about switching to a set of players irons, this is a great choice, as it won’t set you back much financially. You can even use this set to force yourself to hit the center of the club face more often.

This is a high performing iron giving players a great mix of both feel and precision (when hit on the screws of the clubface).

Are the Srixon Z Forged Irons Worth The Money?

Eh, it’s up you to. Personally, I think there are better value options out there that would make more sense. Like I said, blades are blades.

If you want a new set of blades that will last you for many years to come, then yes, they are worth every dime you pay. Don’t think that this is a magical club that will take your game to the next level. If you are already a player looking for something that feels great, the Z forged is a beautiful set of irons.