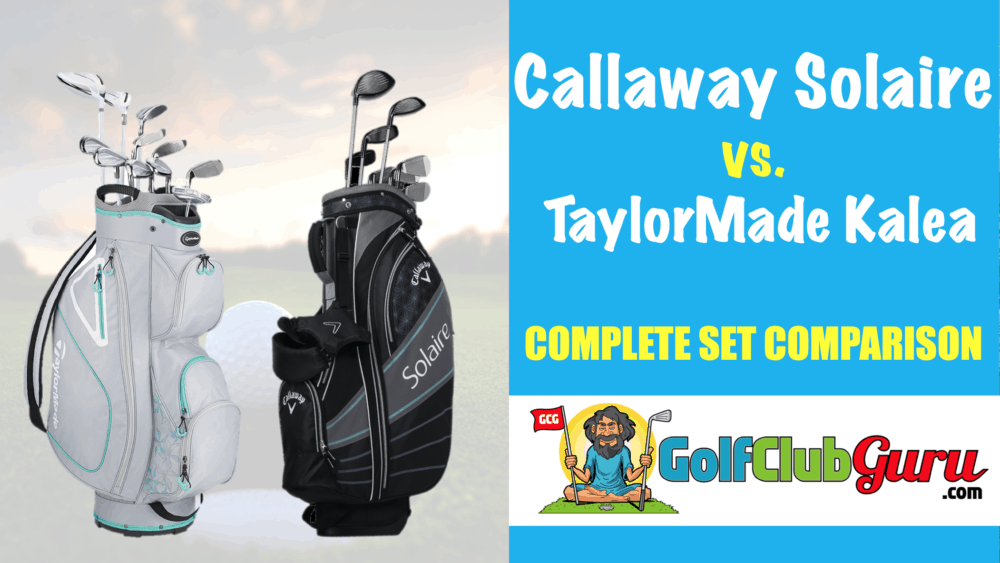 Cheap complete golf sets for women are easy to find. When you start looking for high quality sets, though, the options get a bit more limited. TaylorMade, Callaway, and sometimes Cobra are the only companies that put out premium sets for women.

The two that we are going to compare are the TaylorMade Kalea and the Callaway Solaire. Neither of these sets is going to be considered a bargain, but you know we will always give you a less expensive option in case both of these are out of your price range.

The Callaway Solaire line of women’s clubs has been around for several years. They are a cheaper option than putting a complete set of the new Callaway Mavrik clubs together, yet they are more expensive than something like the Callaway Strata set.

This is a quality set of golf clubs that are built to last you for many years. Although the Solaire works well for a beginner golfer, it is also an excellent option for a female golfer who has been playing the game for quite some time.

The Solaire 11 piece set comes with a Driver, 3 Wood, 5 and 6 Hybrid, 7-9 iron, PW, SW, and Putter. The putter included as part of the Solaire set is an Odyssey putter, which in and of itself would cost you well over $100. The classic black golf bag will not only look sharp; it will also hold up well against dirt.

The sport set comes with a bag that is a stand bag in case you are a walker. There are other options that will include a cart bag, but we recommend a stand bag, as it’s easier to transport and will encourage you to get more exercise (by waking the course) when possible.

As far as the set makeup is concerned, it truly is the perfect configuration for a female golfer. The only gaps would be a four hybrid or a five wood. However, these clubs are not necessary by any means. Overall the Solaire is a lightweight and forgiving set that works well for the mid handicap to beginner female golfer.

The TaylorMade Kalea Ladies set comes with a Driver, 3 Wood, 5 Wood 5 and 6 hybrid, 7-9 iron, PW, SW, and Putter. The Kalea has one more club than the Solaire, but it is also priced several hundred dollars higher. Just as we loved the Odyssey putter in the Solaire set we love the Spider putter that they are using in the Kalea. That putter has been one of the top performers on and off the tour, and it costs several hundred dollars on its own.

The Kalea irons and woods are all about gaining clubhead speed. TaylorMade fully understands that women cannot swing a golf club as fast or as hard as a man.

They have done everything possible to help you get some of that speed back and hit these clubs as far as anybody else would. The Kalea set comes in three different color configurations. The golf bag that is included is a full-size cart bag with ample storage for all of your golfing needs. This set is great for those that always ride in a cart when they play.

Now that you know a bit more about the configuration of these two sets, it’s time to decide which one is better. From a pricing standpoint, the Callaway Solaire will win out because it is priced lower. From a technology and performance standpoint, we believe they are practically the same.

If you are a new golfer that wants to start with a quality set, the Solaire is your best bet. If you are a mid handicapper looking for a complete set with great set gapping and top of the line technology, then the Callaway Solaire complete set still just makes the most sense. However, you really can’t go wrong with either.

If both of these sets are a little more expensive than you were looking for, the Cleveland Bloom could be a great alternative. The Cleveland Bloom women’s complete set is priced a few hundred dollars less than the Solaire, and it comes with a Driver, 3 Wood, 5 & 6 Hybrid, 7-SW in irons, and a putter. So you really will get the same setup that you do with the Solaire.

This is a very forgiving set of clubs that are designed for both distance and accuracy. You will have no trouble getting the ball off the ground. We love the sand wedge included in this set as Cleveland makes some of the best wedges on the market. The center of gravity on the Cleveland bloom golf clubs is low to help you get the proper launch on the ball as well.

Price Comparison Between The Three