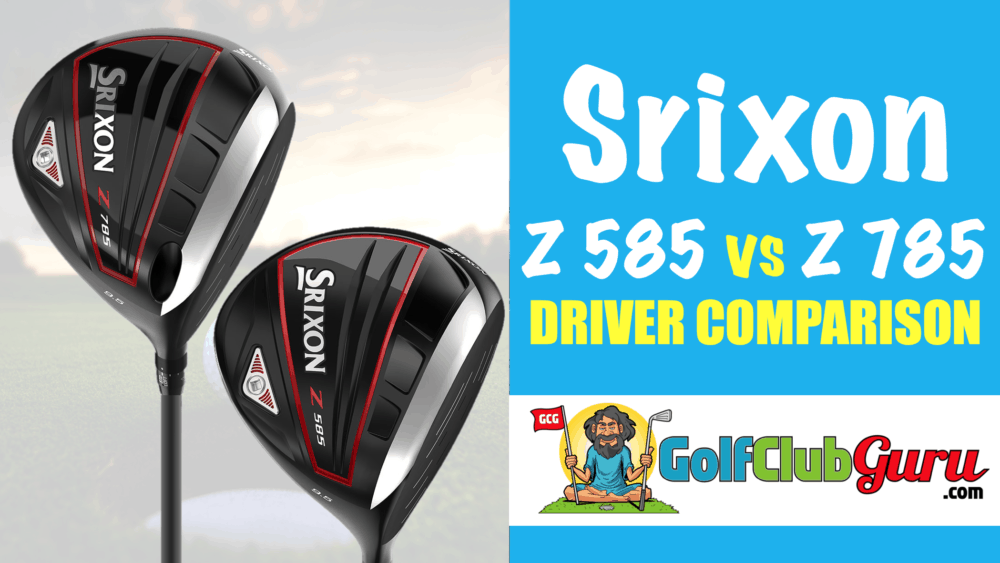 In general, Srixon seems to fly under the radar. They have some great products that don’t get the recognition or attention that they deserve.

The Srixon Z 785 and the Srixon Z 585 are drivers that were released about two years ago. These two drivers are relatively similar, and people are left questioning which one would be the better fit for their game. Since Srixon equipment is not as widely talked about, it can be hard to find comparisons and details on these two drivers.

Luckily we have you covered, and as always, we will offer alternative options for those of you looking to save a little money.

The Srixon Z 585 is not an adjustable driver, and it is available in a 9.5 and a 10.5-degree option. The reason the Z 585 is not adjustable was so that a fixed center of gravity could be implemented to make this driver more forgiving.

If you struggle with launch or ball flight at all with your driver, the Z 585 is an excellent choice for you. With the combination of the same Ti51AF face that you have in the Z 785 but with added forgiveness, this is an excellent fit for the mid to high handicapper.

The only real problem with the Srixon Z 585, and it’s not a big problem, is that it has a more non-traditional shape to it. If you can get used to looking at a unique driver head shape, we’re sure that you will find some great success with this club.

The Srixon Z 785 is a high-end adjustable driver that is built around the concept of playability. The face on the Z 785 is the new Ti51AF Cup Face. The ball speeds produced by this face are much more significant than any other Srixon driver we have seen. The ball speeds will rival TaylorMade and Callaway’s latest releases, like the SIM and Mavrik drivers.

In addition to the great ball speeds with the Z 785, you will have the ability to adjust the loft and the weight on the driver head. If you are looking for something that performs and feels like a custom fit driver each time you go out to play, the 785 would be a good choice for you.

The ball flight on the Srixon Z 785 is going to be a bit lower and more penetrating, and the ultimate goal is distance. It is not to say that the Z 785 is not forgiving at all, but it is undoubtedly less forgiving than the Z 585. This driver would be considered to be more of the player’s driver, but it is not that difficult to hit that a mid handicapper would not succeed with it.

Which One Is Right For Me?

Both of these drivers are some of the best clubs that Srixon has put out to date. We think that if you hit both of these drivers sides by side, you will end up choosing the right one for you based more on preference than on performance. They will both perform well.

Choose the Srixon Z 585 if you are looking for higher launch and more forgiveness on drives.

Choose the Srixon Z 785 if you are looking for adjustability, playability, and lower spin with faster club head speeds.

Both of these Srixon drivers have dropped considerably in price since their release several years ago. However, if you are looking for the best value drivers, we have two alternatives that could do the trick.

The Callaway XR 16 driver is a little older than the Srixon, and it is going to be a better replacement for the 585 than the 785. This club is all about distance and forgiveness.

You can purchase a slightly used one for around $150, which is possibly the best value driver on the market at the moment. If it were up to us, we’d strongly recommend the Callaway XR 16 driver over the Z 585, due solely to the price difference. Performance wise, they are nearly the same driver.

If  you want a better value alternative to the Z 785, you can find some great deals for the Cobra LTD Pro Driver, both for new and used models. The LTD Pro driver is all about lower spin for faster club head speeds. Like the Z 785, it’s adjustable and easy to work the ball.  Its lower loft and fade settings benefit golfers with higher swing speeds.

You can pick up a used Cobra KING LTD Pro driver for around $100, while a new model will set you back around $250.