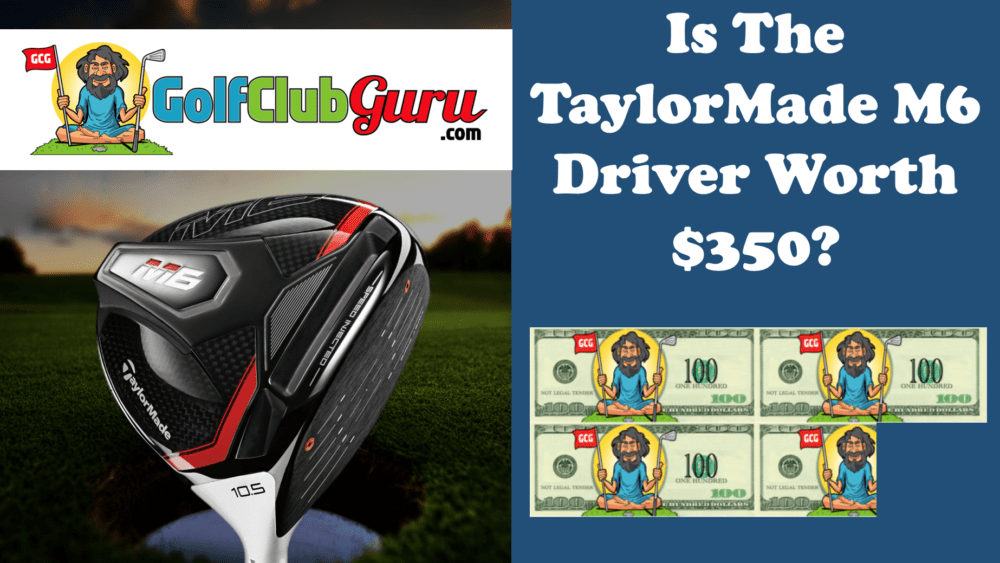 The TaylorMade M6 driver is an awesome all-around driver. But that doesn’t mean you should buy it. Why would you pay $350 for a driver when a $100-$150 alternative would perform practically just the same? That’s what doesn’t make sense to us.

If you can dig deep into your willpower and find some patience, you can find some incredible savings by playing clubs that have been released for 2-5 years. The best part? No significant improvements are ever made in that short time period.

So, the answer to the question: No, the TaylorMade M6 driver is not worth $350 IN OUR OPINION. You may think otherwise – and there is nothing wrong with that. If you can afford it and want the best performing driver possible, get it. We don’t care. We can’t just support it.

So, the next question: what’s a better value alternative? The answer depends on how much money you are willing to spend.

Who SHOULD Get the TaylorMade M6?

You can probably tell that we don’t recommend the M6 to many people. But, let’s start off by talking about who actually WOULD be a good fit for the TaylorMade M6. This isn’t meant to bring anyone down, by the way.

If you want the absolute HOTTEST driver of the year, the M6 is probably the one for you. If you feel more confident with the newest, latest equipment, then it’s worth the extra money. If you have the money and you want to support your local golf store, local fitter, or local pro shop, go for it! It’s a great driver, and the price has already dropped from $500 to $350, so at least you saved SOME money.

If you are set on buying a new (not used) driver, the TaylorMade M6 driver would be a decent option. It can be difficult to find a 2-5 year old driver in new condition, so you might as well buy a recent release if you are set on buying new. Personally, I’d a big fan of used clubs. They offer FAR better value.

However, if you simply have been told that the “Speed Injected Twist Face” and “Inertia Generator” and “Hammerhead 2.0 slot” are worth the extra money from previous models, you’ve been told wrong. It’s as simple as that.

Better Value Alternative for $150 or Under: Original TaylorMade M2

If you have a budget of $150 and want a driver that is similar to the TaylorMade M6, I’d pick up a slightly used original TaylorMade M2. Not the latest M2 (2017), but the original M2 (2016). Far lower price, but practically the same club with a different paint job. GlobalGolf currently has an original M2 for $149.99, and that’s not even considering the current 20% promotion they have going on right now.

For each year that goes by, TaylorMade will make 2-3 models of clubs. We’ll be at the M22 pretty soon, I’m sure. Or maybe they will choose to go a different route with another starting letter. Either way, the performance difference between the TaylorMade M6 and the original TaylorMade M2 is marginal. It’s far better to save your money, and use the savings on lessons or a fitting instead.

The original TaylorMade M2 driver head will go down as one of the best performing heads of the decade. And, yes, you can quote me on that. Many think it performs even BETTER than the M3, M4, M5, and M6 heads.

Technology wise (if you can call it that), the main difference in the M2 and M6 is that the M6 has the “Twist Face”. If you are like me, you hate even giving recognition of club manufacturer’s mumbo jumbo by talking about it. It’s more of a marketing plow. The M2’s club face doesn’t twist any more than the M6, in our opinions.

If your budget is tight – we understand. We’ve been there before, and there is literally nothing stopping you from getting an awesome performing, brand name driver for just $100. Our current recommendation would be the Callaway XR 16 driver. Super forgiving, super long, super affordable price. What more would you want in a driver?

If you want a super adjustable driver with lots of sliding weights and a super high price tag, by all means go for it. And if you want a super forgiving, super long driver for a price tag that is $250 higher than the Callaway XR 16, go for TaylorMade M6. Not sure why you would, but you do you, boo boo.

There are lots of Callaway XR drivers out there that are for sale (in great condition) for less than $100. Most online stores have free shipping for $50 or $75 purchases, so you should be good there. And be sure to check out the “Golf Promos” tab above to take advantage of the current promotions from the used golf companies that we recommend.