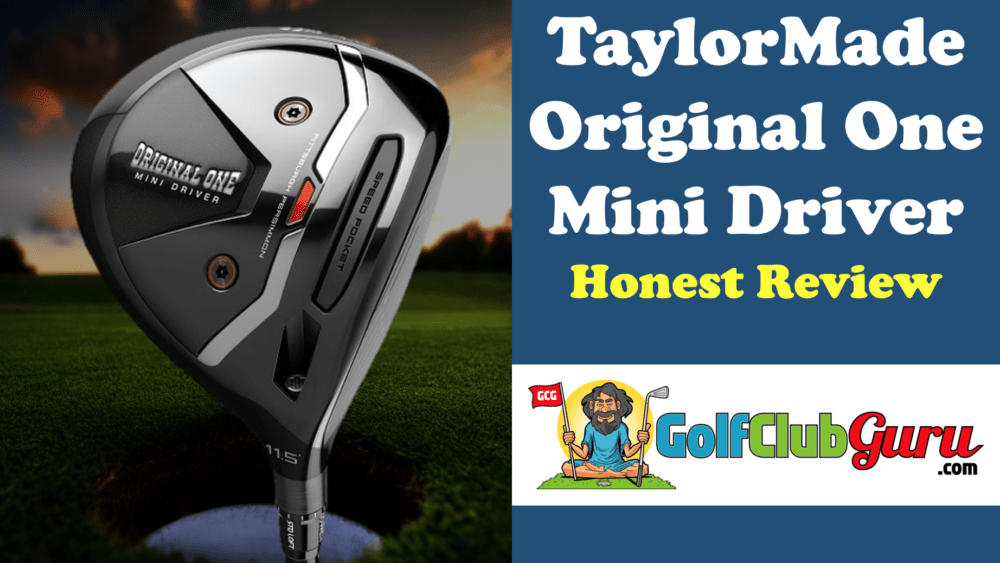 A Frank Review of the TaylorMade Original One Mini Driver

Here’s the two most common golfers that are best suited for a mini driver, like the TaylorMade Original One Mini:

Without further adiue, here’s our honest review of the TaylorMade One Original Mini driver.

At first glance, it’s a very attractive club. I’m a big fan of the black color and the crown design. The clubhead was a little bit bigger than I expected, looking more like a driver than a three wood for sure. At a driver head size of 275cc, it’s well below the average cc of a driver of around 450cc.

On the bottom of the club head, you’ll notice there isn’t any moving parts like sliding or removable weights.

Appearance doesn’t mean much if the club doesn’t perform well. We found the TaylorMade Original One Mini driver to be extremely forgiving and relatively low spin for a wide variety of swing speeds. I hit a few balls off the toe (a common problem for me), but they turned into perfect draws that ended up exactly at my target in the end.

Just for fun, we hit a few off the deck to see how it performed in case you desperately wanted to reach a par 5 in two. Truthfully, it’s 10x easier to hit the mini driver off the deck than a traditional driver. However, I wasn’t hitting the mini driver (at the standard 11.5 degrees) but a few yards longer than my 3 wood. They were low, running bullets. It’s worth noting that I’d hit my 3 wood way more consistently too. As a result, I don’t see a huge benefit of using the mini driver off the deck. Adjusting the loft to 13.5 would have made my ball flight much higher and probably increased my distance too.

Personally, it’s not a club that I’d have a spot for in the bag, but I’m sure the club is a good fit for some golfers that I talked about at the top of the article.

If you’ve read any other article that we have written, you know we are proponents of buying the best value golf equipment. At $400, we surely don’t consider the TaylorMade One Original Mini driver a steal. However, TaylorMade has released a few different mini drivers in the past 5 or so years, most notably the SLDR Mini and the AeroBurner Mini.

The SLDR Mini can be extremely difficult to find in good condition, but there are lots of AeroBurner Minis on the market. You can pick up one in good condition for anywhere from $110-$150 at the time that I’m writing this.

Truthfully, the main difference is that the AeroBurner doesn’t have the adjustable loft sleeve. However, if it’s not something that you’d expect to use often, then you might prefer the savings of $250+ instead. Other than that, they are practically the same clubs.