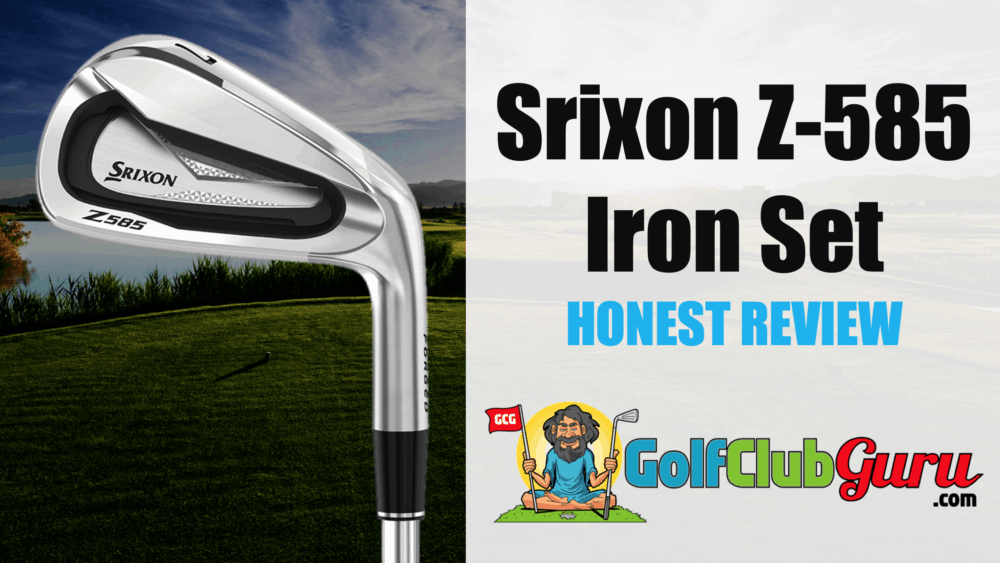 An Honest Review of the Srixon Z-585 Iron Set

If you are looking for game improvement irons that LOOK and FEEL like players irons, the Srixon Z-585 irons should be high up on your list to try out. They have cavity backs for added forgiveness, but their thin toplines and forged design make you think you’re gaming a players iron.

It’s often said that Srixon is the best kept secret in golf. You may or may not agree with that, but I’d encourage you to at least test them out to see what you think. One thing is for sure though… Srixon clubs don’t get the attention they deserve.

Personally, the MAIN thing about game improvement irons that deters average and above-average golfers is the THICK toplines. Thankfully, the Srixon Z-585 irons have very thin toplines, which are very attractive at address. As long as you can cope with the unforgiving look at address, you’ll be fine when it comes to forgiveness due to the increased perimeter weighting around the clubhead.

It’s like the best of both worlds: appearance of a players iron, while retaining the performance (see next section of the article) of a game improvement iron.

I really like the graduated sole design – thicker soles with longer irons for extra forgiveness and thinner soles for shorter irons for added control on well struck shots.

Design wise, I really like the simple color scheme of black and silver. Overall, it’s simple a very attractive set.

Those looking for a game improvement iron typically want two things: distance and forgiveness. The Srixon Z 585 irons perform exceptionally well in these categories. While demoing, I was hitting these irons about 3-5 yards longer than my current gamers, and both irons have the same lofts (31 degrees for a 7 iron).

On my mishits is where I saw the biggest difference, though. My mishits with the Srixon Z 585 irons fly nearly just as far as my perfect strikes. The same can’t be said about my current iron set, where I’m penalized pretty badly on off center strikes.

An added benefit of the Srixon Z 585 irons? Incredible feel at impact. That’s rare when it comes to game improvement irons. The great feel at impact is due to the forging process. The club heads are forged from soft 1020 carbon steel, leading to little vibration and a “butter” feel when hit on the center of the club face. The forging process also plays a large role in why this set has such great distance control. I was able to hit 10 shots in a row with my 7 irons all within 5 yards distance-wise, which gave my great confidence in this set.

With their new high strength steel faces, I wouldn’t be surprised if the Z 585 irons last longer than other forged irons. Durability is something that isn’t talked about much when deciding which iron set you should buy. They haven’t been out long enough to know for sure, but the stronger faces can’t hurt when it comes to durability.

Srixon released three lines of irons with their latest release: The Z 585 irons, the Z 785 irons, and the Z Forged irons. We’ll break them down in simple terms:

You’ll notice that they all were made for feel. I can truly say that I didn’t notice a difference in feel between the three, even on perfectly struck shots with the Z Forged blades.

As you can see, the Z 585 is the most forgiving model of the three, but it’s not as forgiving as other game improvement iron sets. It’s a great option for those that want a little forgiveness without giving up on workability, feel, and appearance at address.

This website is based on the best value golf clubs. Although Srixon is very fairly priced when compared to other insanely priced brands, we still think there are better value options available. A common way to save a lot of money is to find the previous line of clubs. Because they have been out of 2-3 years, the prices have slowly dropped every month.

In this case, check out the previous model: the Srixon Z 565 irons. You can easily pick up a good condition set for around $500, which is a big difference between the price of the new Srixon Z 585 irons ($900). Saving $400 without giving up on any significant improvement between golf clubs is an easy decision in our minds.

Just look at the picture above. There is hardly a difference at all in design. Performance wise, the main difference is that the new Z 585 irons have a stronger club face. Not a huge difference, though. Save your money and spend it on things that make a difference, like lessons with a PGA instructor or more rounds for practice.