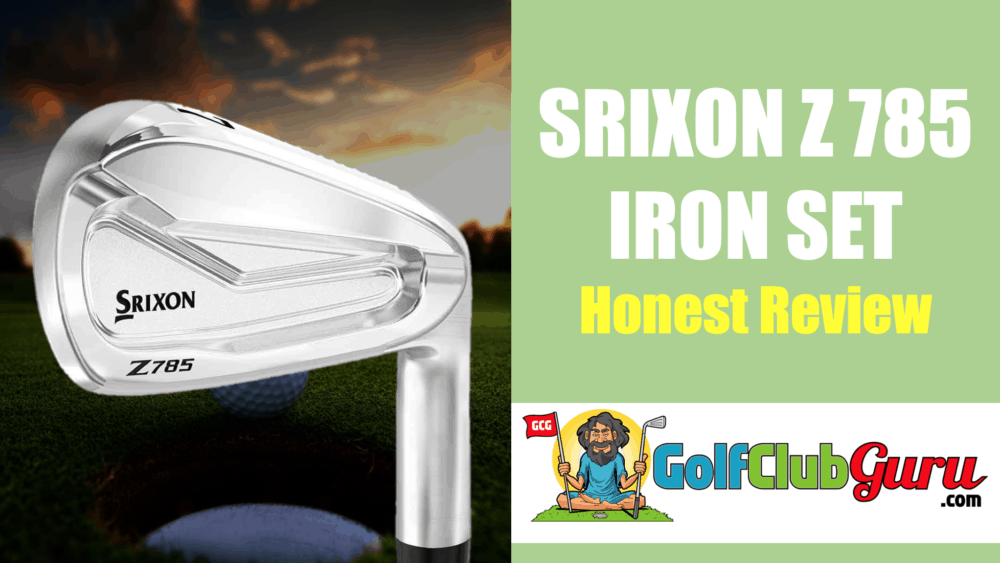 The Srixon Z 785 irons offer incredible feel at impact, great workability, and wonderful distance control (if you can hit the center of the club face). However, we think they are a highly overrated set of players irons for one reason…because the Z 585 irons offer all of the benefits of a game improvement iron in a players iron look.

The Srixon Z 785 iron set isn’t for everyone.

Anyway, here’s our honest review after getting to try out the Srixon Z 785 irons last weekend.

Hard to get much better than this when it comes to appearance. The little amount of offset, small thin line, and all silver design lead to a very attractive club overall. However, the most “attractive” clubs are typically the least forgiving clubs. Truthfully, there isn’t much more to say about the appearance.

Just from looking at them, the Srixon Z 785 irons look very similar to the Callaway X Forged Irons. A similarity worth talking about is the very narrow club face. At address, I was a little nervous that I’d hit more toed shots than normal, or even more shanks, which isn’t a very reassuring thought.

Personally, I’d prefer a slightly wider club face (and therefore sweet spot). However, if you are super confident with your ball striking, this won’t be a problem. If you are like me that gets to play golf once a week if you’re lucky, you might want to choose a more forgiving set.

If you want a workable set of irons that feels incredible at impact, this is a great set for you.

I was able to work the ball with the Srixon 785 irons incredibly easily. It was super easy to hit draws or fades on demand, which can be a huge benefit or huge detriment, depending on your game. I’m typically playing my best golf when I am hitting everything straight except when I truly need to work the ball, so I wasn’t a huge fan of this set to be honest.

From testing all three of the recent models of Srixon irons, they all feel great at impact. Very small amount of vibrations, and very quiet sound at impact. However, the same is true for the more forgiving counterpart, the Srixon 585 irons.

I’m going to make a pretty strong statement here: there aren’t many golfers that would benefit from the 785 irons. There are MANY golfers that would benefit from the 585, though. The 585 irons offer all of the benefits of the 785 except great workability, and it’s more forgiving and a tad bit longer. Easy decision there, unless workability is a huge concern for you. That’s pretty rare, though.

First, though, let’s talk about how they are similar. They all have pretty small toplines, so the appearance at address is pretty similar between the three. Next, they are all forged using the same forging process, leading to roughly the same sound/feel at impact.

Now, the differences. The Srixon Z Forged irons are blades, while the 585 and 785 are cavity back (585 has more perimeter weighting than the 785, though). The 785 is more workable than the 585, but not as workable as the Z Forged blades.

Honestly, 90% of golfers should stick with the 585. It’s more forgiving, longer, and still offers a great look.

5% of golfers, the ones that want a little bit of forgiveness and LOTS of workability, should go with the 785.

The last 5% of golfers, the ones that want to play blades to get the best distance control and workability possible, should stick with the Z Forged blades.

Srixon doesn’t price their clubs insanely high like many of its competitors. However, that doesn’t mean you still can’t find ways to cut the price down.

Our recommendation? Buy the older model, the Srixon Z 765. Pretty much the same club with some small design differences. The price difference is pretty steep though, so you can save around $400 without sacrificing anything performance-wise.

And again, in case you haven’t read anything that I’ve written so far, we’d recommend you consider the older verison of the more forgiving option too, which is the Srixon Z 565 iron set. It’s just like the new Srixon Z 585, but way more affordable.

It’s a set that is very similar to the Srixon 785 irons. Thin toplines, a small cavity back, and forged design. Because the lofts aren’t as strong, a 7 iron MP-30 won’t go as far as a Srixon 785 7 iron. However, the number on the bottom of the club is just that… a number. It’s the loft that really matters.