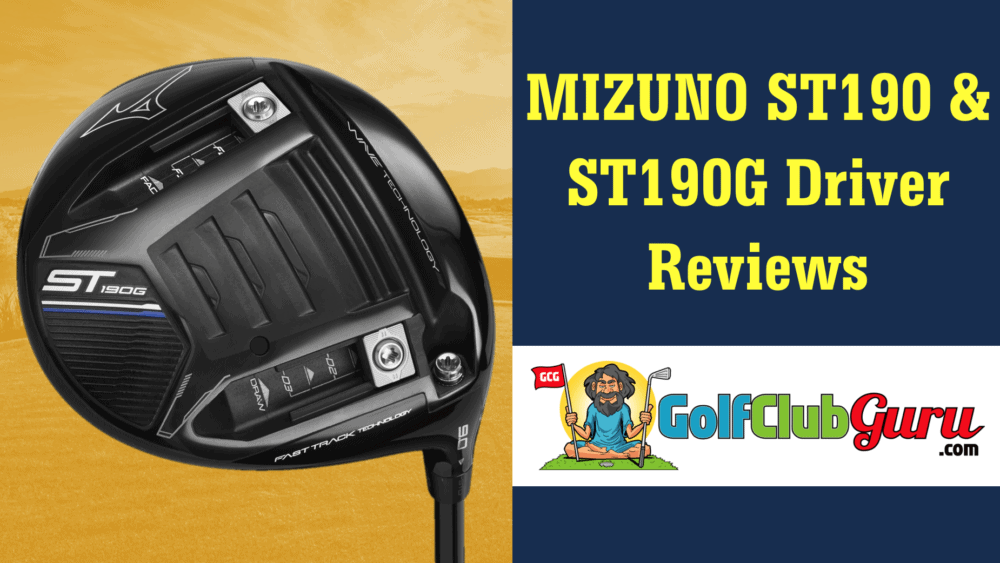 Mizuno is one of the most underrated companies when it comes to drivers. Sure, they are the best company for forged irons. But guess what, they also make great drivers and wedges.

By the way, thank God. Mizuno got rid of that hideous blue driver heads with the upgraded Mizuno ST190 drivers. It’s been a full five years of blue driver heads. It’s about time they made one to appeal to a wider range of golfers.

The latest driver release has two different models: the regular ST190 and the ST190G. What’s the difference? Is one better for me than the other? Are they worth the price?

Let’s find out. Just take our word for it. I’m kidding. You should do your own research, too. And you should get professional fitted if you care enough about golf to buy a driver for $200ish+.

Like we mentioned earlier, we are a big fan of the black finish when compared to the blue that’s been on the last 5 years worth of Mizuno driver heads. At address, the driver head has a very large, forgiving shape to it that shouts forgiveness for those that need that.

Looking at the Mizuno ST190 driver, it looks a whole lot less complex than the ST190G. Less moving weights and options for adjusting make it better suited for someone that hates tinkering with their driver as much as I do. What stuck out to me the most was that it’s practically the exact same design as the predecessor Mizuno ST180 driver. It’s not very often that a company will implement the EXACT same design but with a different paint job. They try to at least mix it up a little bit by adding big long words that make you think it’s the hottest innovation ever thought of.

Looking at the Mizuno ST190G driver head, there is a lot more going on. We don’t like getting into the nitty-gritty marketing hype that companies love to come up with every year. We like to break it down in simple terms, so that’s what we’ll do.

There are two tracks with weights on the club head of the ST190G. These tracks can be adjusted to impact spin and a draw/fade bias.

Weight Forward vs Back: In general, more weight towards the back of the club results in more spin, which is beneficial for those with slower swing speeds. For a golfer looking to reduce spin (ie. most golfers with faster swing speeds), you’d be better off with the weights towards the front of the club.

Weight Towards the Toe vs Heel: In general, more weight towards the heel of the club incorporates a draw-bias. On the other hand, more weight towards the toe of the club results in a fade-bias. That’s because you are not requiring more hand action to turn the heel over and close the club face at impact. Unless you have very active hands at impact, you’ll leave the face slightly open in relation to your swing path, resulting in a nice fade (and potentially a crazy banana slice, of course).

Wait, so you think I’m going to try this club out and tell you exactly how it will work for YOUR swing. That would be ridiculous. To really get a feel for this club, you’ll need to test it our yourself and have something (your current gamer, probably) to compare it to. And if you are going to go through that hassle, you might as well pay a little bit of money and get professional fitted while you are at it.

In general, though, these are great drivers. If you are a Mizuno loyalist, you can’t go wrong here. If you aren’t, I’d suggest at least giving them a try. They half the price of other big-name drivers that have been released recently. If you like to tinker and mess with weights on the sole of the club, try out the ST190G. If you’d prefer a less-adjustable driver, consider the ST190.

If you want my personal experience for whatever reason, I hit the ST190 and ST190 relatively the same as my current gamer, Titleist 910D. The feel was much better than my current gamer, and I noticed a tad bit more forgiveness on off center hits. Other than that, nothing to write home about (partly because I can never remember which side of the envelope the stamp goes on).

For a brand new driver from a company as well respected as Mizuno, you can’t go wrong at just $200 for the Mizuno ST190 or Mizuno ST190G drivers. They will hold their value pretty well assuming you take good care of them and don’t hit too many bad sky-balls. You can always sell it down the road and recoup a good bit of your investment, which can’t be said about most new drivers these days.

If you are like me and prefer to save whenever you can, consider a used one, or maybe go back a few years and consider the Mizuno JPX 825 driver, which was very popular when it was originally released. You can pick one up for less than $100 pretty handily. The Mizuno JPX 825 has a very similar look/feel to the ST190, as it was released before Mizuno mistakenly (but also on purpose, for some reason) put a blue finish on all of their drivers.

Well that’s all we’ve got for you today. Remember: don’t fall for the gimmicks that big golf manufactures are pushing down our throats. There are lots of great drivers out there, even from less popular driver brands like Mizuno. Some will work great for your swing – others won’t. That’s why you should get fitted. With that being said, don’t blame a driver for your terrible scores. You are probably just a terrible golfer (for now).