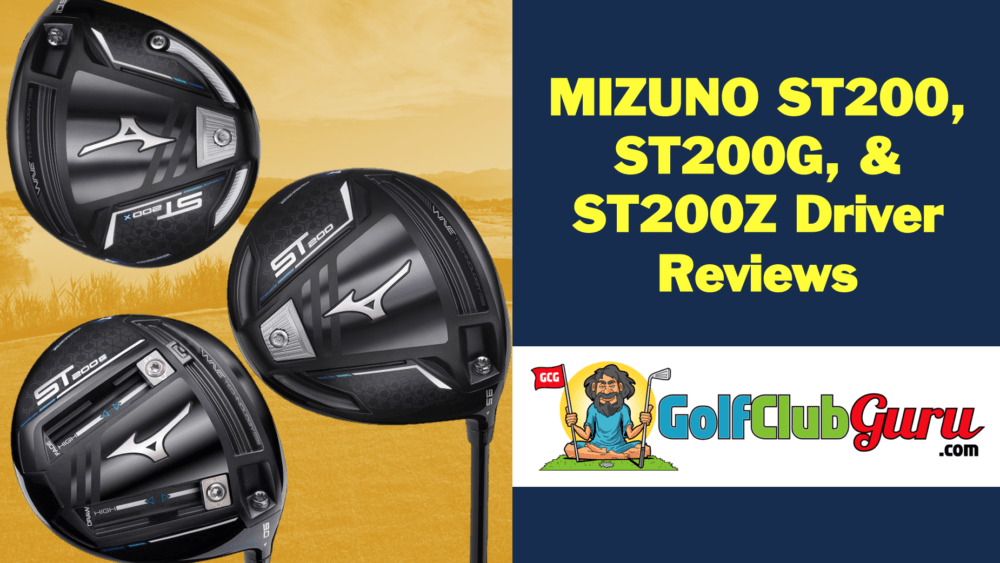 The latest drivers from Mizuno (the ST200 series) are exactly like the old model (the ST190 series), with a small addition: the ST200X driver. Other than that, the ST200 and ST200G are near exact replicas of the predecessor models. What does that mean? There is a great opportunity to save some money without sacrificing performance by going with the better-prices ST190 series, unless you are set on the ST200X driver of course.

In this article, I want to give an unbiased comparison of the three models. Is one better for you? Maybe so. However, one might be better “in theory” for your game. That doesn’t mean that it will perform better than the other two though. Well… that sucks! I know. You’ll need to test them out for yourself. That means testing different combinations of shafts and club heads and head adjustments (if working with an adjustable driver head).

While you are at it, you might as well get professionally fitted by someone that actually knows what they are doing. No, don’t ask your friend Bill who the best fitter is. Ask some local PGA pros if they know a good fitter. They may be able to do a small fitting themselves for you for a lower price or free, depending on the pro and club.

Anyway, let’s get back to the topic at hand. Here’s our honest, simplified review of the ST200 series of drivers from Mizuno. I thankfully have a great connection with Mizuno through an old high school friend who lets me try out as many clubs as I’d like.

Mizuno ST200 Driver – As Forgiving As They Come

I found that the Mizuno ST200 driver truly was the most forgiving driver of the three. On my mishits while testing, the feel & sound wasn’t great, but the results were perfectly fine. If you have a slow or medium swing speed and struggle with hitting the center of the face, this the one for you. The ST200G is more for faster swing speeds trying to reduce their spin, and the ST200X is more for slicers and those that struggle with getting enough air on their shots.

Along with the other two models, I really like the look of the club at address. The large black crown gives a very forgiving look, while the white outline and white Mizuno logo n the top of the crown makes it very easy to aim at your target and focus on the center of the club face at the same time.

Better value alternative: If you don’t feel comfortable spending $400 on a new club, I don’t blame you. In place of the Mizuno ST200 driver, I’d recommend the Callaway XR 16 driver. Super forgiving. Super affordable. It was made about 4 years ago, which has led to a small decrease in price every year (as Callaway continues to release new drivers). It’s my go-to recommendation for a forgiving driver under $150.

The Mizuno ST200G driver, the only fully adjustable driver of the three, is meant more for reducing spin. Who needs to reduce spin on their drives? Those that swing fast. It’s that simple. Lower spin will NOT help you hit longer, straighter drives if you are swinging under 100 mph (rough number, of course, as it depends on a few other things too).

As an adjustable driver, it automatically means that it’s a tad bit more expensive. In this case, it’s actually $100 more than the ST200 and ST200G at $500. Maybe the “G” stands for “Good God who can afford this thing?”. Is it worth the increase in price? You’ll have to be the judge. If you really like tinkering with your driver of if you create too much spin due to your high swing speed, it might be worth it to you.

The two sliding tracks allow you to adjust the spin and draw/fade bias of the driver. Some love it. Some hate it. Personally, I’m not a fan of adjustable drivers. We recommend getting fit for a driver head & shaft combo and sticking with it. It might be an adjustable head like the Mizuno ST200G, it might not be. You can’t change a driver setting to fix your god awful swing. Let’s tackle the actual problem here — your terrible swing habits, am I right?

Better value alternative: Wait, you don’t just have $500 laying around? So weird. Well, if that’s the case, you’ll have to find something that will offer all of the benefits of the Mizuno ST200G but with a much lower price tag. I’d recommend the TaylorMade M1 driver, the original one not the most recent one. They made TONS of these when they were first released, so the market is flooded, which has lead to a very affordable price now. Very easy to adjust the spin and draw/fade bias, just like the Mizuno ST200G. You can pick one up for around $100-$110 in decent condition. This is club that sold for $400 not too long ago, if you can remember that.

Like I mentioned before, moving a weight around on the driver head shouldn’t be your first idea of fixing your over-the-top swing and resulting banana slices. However, if you simply want every possible way to increase the odds of a beautiful, towering draw off the tee, the Mizuno ST200X driver is the one you want. We all know those high draws that Rory hits are the sexiest part of golf.

How will this driver help you hit high draws? Well, it’s highest launching driver of the three (with all lofts staying constant, of course) and the additional heel weight makes it easier to naturally turn the club face over at impact. The extra weight in the heel makes your hands naturally shut the face, which should prevent most pushes and slices as long as your club path is decent. So do you want to fix the root of the problem (an open club face at impact) by buying a club or by taking a lesson and learning to properly release the club through impact? That decision is up to you. A couple of lessons from a good PGA instructor might cost $150, while this driver costs $400. Just keep that in mind.

Better Value Alternative: A great replacement at a lower price would be the Ping G SF Tec driver. The SF stands for “Straight Flight”, as Ping is very aware of the slicing epidemic in the golf industry. It’s made with the same draw bias as the Mizuno ST200X, with the extra weight towards the heel. No adjustments necessary. You can pick up a good used for about $150 on various different websites. We recommend Global Golf personally. Great selection of clubs, great prices, and even better customer service.