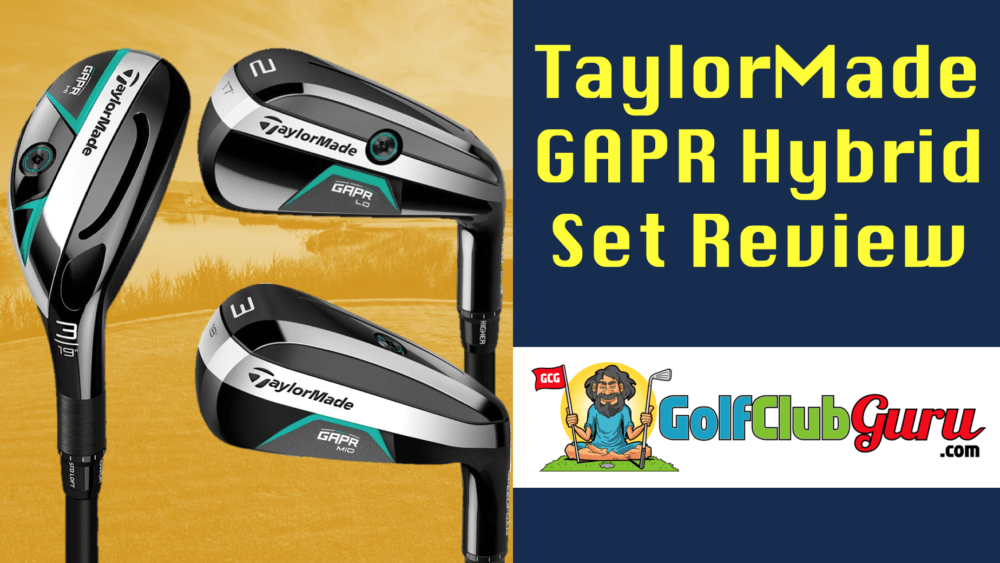 It’s “gap-per”, not “gay-per” just so we are clear. Well now that that is out of the way, we can move on the important stuff: paraphrasing from the TaylorMade website. NOT! No one wants to read that crap.

We’re going to give you an honest review of TaylorMade GAPR hybrids. We like these clubs. We can sum them up pretty easy.

They are too expensive. Period. If you have more money than you have sense, go for it. If you suck at golf and need more air on shots, get the Hi. If you are decent at golf, you’re wrong, you probably suck at golf. Go with the Hi. If you are ACTUALLY pretty good at golf, go with the mid. Lastly, if you are a good ball striker that doesn’t need the extra help getting the ball in the air, go with the Lo. A little generalized, but mostly true.

There are some things that can be found in all three models. Similarities between the Hi, Mid, and Lo include:

So those are the similarities. Let’s talk about what sets each hybrid apart from each other.

The TaylorMade GAPR Lo hybrid is more like a driving iron. Very low profile for a hybrid, which better players will prefer. Many hybrids are slowly morphing into the shape of typical fairway woods – larger and larger every year for more forgiveness. Not the GAPR Lo, though.

Better ball strikers will enjoy the low profile and improved distance control. The GAPR Lo will launch a little lower than the Mid and Hi models, but a better golfer will be able to control his/her launch angle when necessary. It’s a low spinning clubhead, which will favor fast clubhead speeds. Not a huge concern, but worth noting for sure.

If you are one of those guys or gals that never fully commits to something, this is probably the best bet. It’s the safe option. Not for the best golfers, not for the worst golfers. Kinda want a six pack, kinda want a big bowl of ice cream. You know how it goes. The mid is smack dab in the middle of the Lo and Hi – can you believe that? Wouldn’t have figured that out by the name.

The GAPR Mid is not exactly a driving iron, but not a typical hybrid design either. Honestly, it’s a good mix of control and forgiveness and can benefit a wide array of golfers. It’s much easier to launch the ball higher with the Mid, due to a lower center of gravity. If you mostly plan on hitting it off the tee, I can see the Lo being a good option. If you plan to use it from the tee and into the green, though, then the Mid will make more sense. You’ll want the ball to land and stop on the green, not roll over the green and into a potential hazard like a fire breathing dragon. My bad, I meant bunker. Like a bunker.

The TaylorMade GAPR Hi is by far the most forgiving of the two. It’s got more offset, more perimeter weighting, and a lower center of gravity. With a center of gravity even lower than the Mid, the GAPR Hi launches golf balls in the air higher and easier. If you struggle with getting the ball in the air and landing it on the green softly, this is the hybrid for you.

With the stock shaft, I was hitting golf balls far too high personally. You’ll need to get on the range and try all three out to see which one fits your eye and your game best. For me, I was getting too much spin and height, most likely due to my 200 mph swing speed. Just kidding, It just wanted a good fit for my swing.

When a company like TaylorMade purchases a company like Adams (known for their popular hybrids), they are welcome to take their prior model ideas. It’s pretty clear that TaylorMade is replicating this 3-hybrid set from the old Adams Pro set that was released in 2014.

If you are looking to save some money without sacrificing any performance, check out the Adams Pro hybrids. They can sometime be difficult to find, because they were so highly reviewed and golfers that really liked them are swiping up all the good sets quickly. However, you can save a lot of money by picking Adams (in general) over the newer TaylorMade hybrids.

Why spend $150+ on a new hybrid when you can pick up a slightly used Adams hybrid for $50-$70? Same technology. Same designs. Practically the same club, but with a different paint job and price tag.