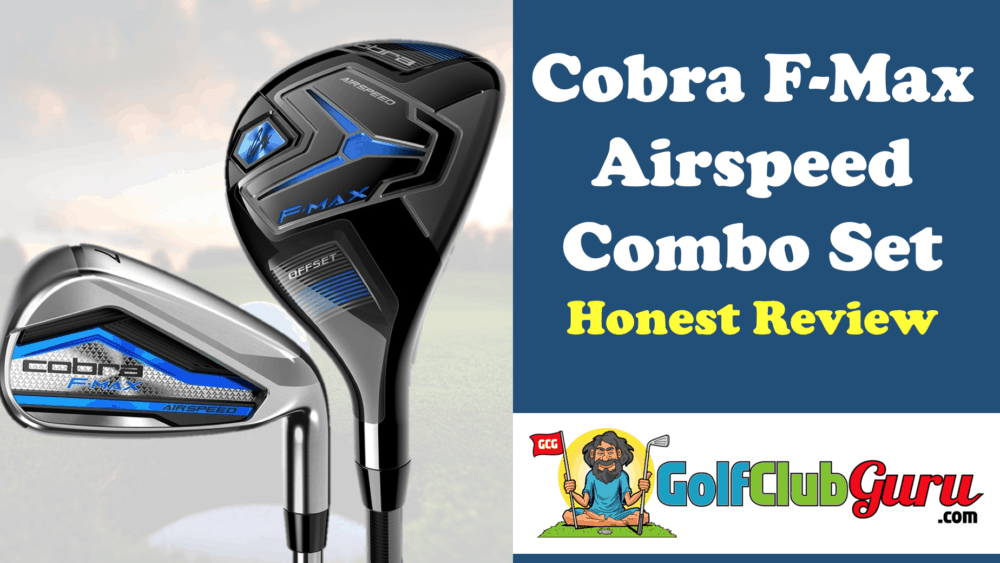 Way too many people buy irons sets and then come to realize that they need to replace their long irons with hybrids. Why not save a step and buy a combo set from the start? That’s what we recommend. Anyway, let’s get into our review of the Cobra F-Max Airspeed combo set.

First off, let’s talk about who should be buying this set, because it’s meant for a very specific, small population of golfers. The Airspeed clubs are meant for slow swing speeds. The clubs were purposely made to be the lightest clubs on the market – light club heads & light club shafts. Light clubs allow you to swing the club faster. It’s as simple as that. If you struggle with generating enough club head speed, this is probably a great fit for you.

However, if you have a moderate or high swing speed for your age/gender, you should be looking for a different set – it’s as simple as that. You’ll have a hard time getting consistent results with this light set of clubs if you swing too fast.

Well, that was a long intro. Shall we talk about the Cobra F-Max Airspeed irons and hybrids a little more in detail?

From the moment you put the club in your hand, you’ll notice the light weight. It depends mostly on what clubs you are used to holding in your hand, but I’d wager these irons are noticeably lighter than any iron that you’ve hit before.

Don’t get me wrong: the Cobra King Airspeed irons and hybrids are super long when you really get a good strike in. However, you might find it hard to be consistent due to the very light weight of the club head.

This set obviously wasn’t designed with me in mind. I’m a longer-than-average male golfer that drives the ball about 280 yards. This driver is really meant for seniors, juniors, or any golfer that simply doesn’t generate the club head speed that they’d like to.

For a cast game improvement iron, I was pleasantly surprised about the decent feel at impact. My mishits weren’t punished too badly, so that speaks to the forgiving nature as well.

The feedback on mishits was significantly lacking, though. You won’t be able to tell exactly where on the face you are hitting the ball, which isn’t great if you are trying to dial in your ball striking. However, new golfers and higher handicap golfers won’t care about a lack of feedback anyway.

Price & Our Thoughts On Value

This iron set is $700. Only $700. For a brand new combo set of irons and hybrid. That’s a steal, right? Eh, it’s not bad compared to other combo sets of 2020, but there are still better value sets on the market. We always recommend buying slightly used combo sets that were originally put out about 2-5 years ago.

Cobra released a very similar set of irons and hybrids a few years ago, called the Cobra F-Max Superlite combo set. They are quite literally only a few grams away from being the exact same weight & feel of the Airspeed combo set. Other than that, the only difference is the paint job and price tag.

You can pick up the Superlite combo sets for $500 brand new, so you can save an instant $200 just by choosing the Superlite set over the Airspeed combo set. We’d recommend trying to find a slightly used set, which should set you back around $350-400 or so.