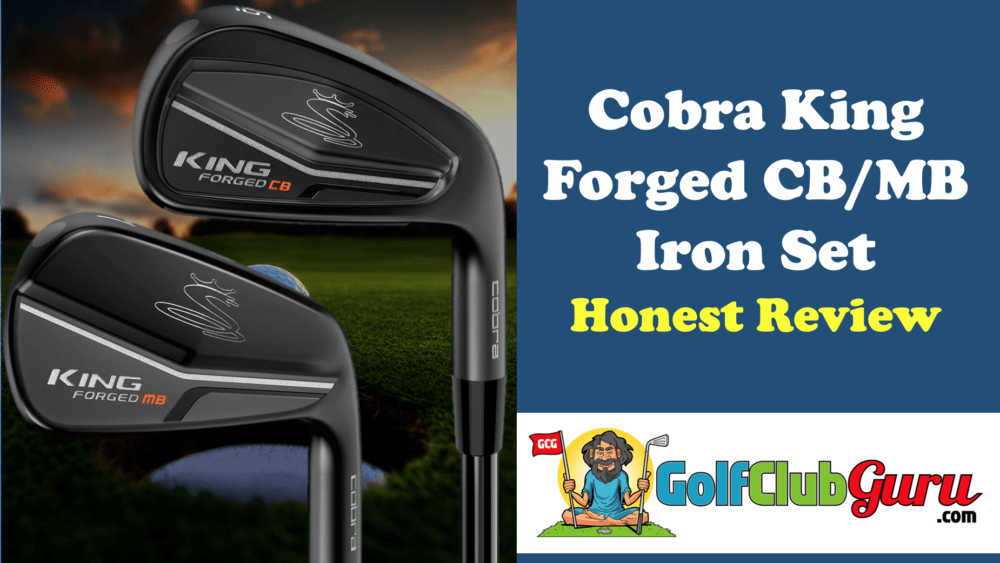 Cobra forged irons are easily the most underrated players irons on the market. The Cobra King Forged CB/MB combo set is a great option for those wanting blades for short irons and a little cavity back forgiveness on mid to longer irons.

Priced at about $1,000, you might think it’s a pretty good deal. Well, it’s not. Wait a few years and pick them up for half the price. Or, check out our better value alternative down below.

I’ll admit that I’m a sucker for thin toplines. I look at blades like Patrick Reed looks at his playing partners not watching him when he needs to improve his lie in a bunker.

The Cobra King Forged CB/MB irons come in two colors: black and traditional grey/silver. I’ve never been a big fan of black iron sets, so I chose to try out the traditional colored irons.

From address, the CB and MB irons looked the same – very thin toplines and a very small club face relative to similar players irons. A little daunting to be honest, but great for those that like compact profiles.

Looking at the club heads, the mid and longer irons obviously have some perimeter weighting which will help a little for launch and forgiveness.

I can’t speak more highly of the workability of the Cobra Forged CB/MB irons. I was able to work the ball left and right pretty handily when I got to try the set out on the range. If you like working the ball, great. If you are trying to hit as straight as possible, this isn’t for you.

Feel and distance control were top notch. Cobra’s 5-step forging process produces some incredible feel at impact, with a very muted sound and limited vibrations through your body after making contact. As long as you are confident with hitting the center of the club face consistently, you’ll be rewarded with great distance control. You won’t experience many “dead” balls or “flyers” like you would with other sets.

If you are one of those guys that wants to hit your 7 iron as long as possible, this isn’t the best set for you. This is not a distance players iron set. The Cobra Forged CB/MB irons are for control and consistency, not distance. The lofts are simply not as strong as other irons. I was hitting these irons about 4-5 yards shorter than my current Mizuno JPX 825 forged irons, which have lofts mostly 1 degree stronger.

Just a quick note: if you aren’t a solid ball striker yet, that doesn’t mean you should shy away from a compact players irons like the Cobra Forged CB & MB irons. Gaming this set will allow you to slowly progress your ballstriking. The feedback on your mishits will help you learn (i.e. force you) to start hitting the center of the club face.

Later on, you could always go back to a more forgiving set, which will then appear to be the easiest clubs on earth to hit. Nothing wrong with going back and forth between a players iron set (to improve your ballstriking skills) and a more forgiving set (to score better when needed).

At GolfClubGuru, we are all about value. We don’t like the idea of buying new clubs that will instantly lose their value when you tear off the plastic. It’s like buying a new car and driving it off the lot to instantly lose $10,000 in value.

Instead, we encourage budget-focused golfers to stick with slightly used clubs that were released 2-5 years ago. A great alternative to the Cobra Forged CB/MB irons is Cleveland 588 CB/MB irons, which are priced about $500 cheaper. They have the same layout as the Cobra set, with the longer irons being cavity back and the shorter irons being blades. Cleveland and Cobra go head-to-head each year when it comes to the most underrated clubs on the market. Although Cleveland is known for their incredible wages, let me assure you this better-priced CB/MB set will perform just as good as the new Cobra irons.

Take the $500 of extra savings and buy a package of lessons from a reputable PGA instructor. Or maybe consider paying for a professional fitting. If you aren’t interested in those two options, just take the money and play more rounds of golf!

Best for: better golfers that want more control with their shorter irons and a tad bit of forgiveness for longer irons. Also great for mid to high handicap golfers that simply want to improve their ball striking quicker.

Are they worth the price? That’s up to you buddy. They aren’t worth $1,000 to me, but your situation may be different. There are simple too many great options out there (like the Cleveland 588 CB/MB irons) at a lower price that are practically the same clubs.