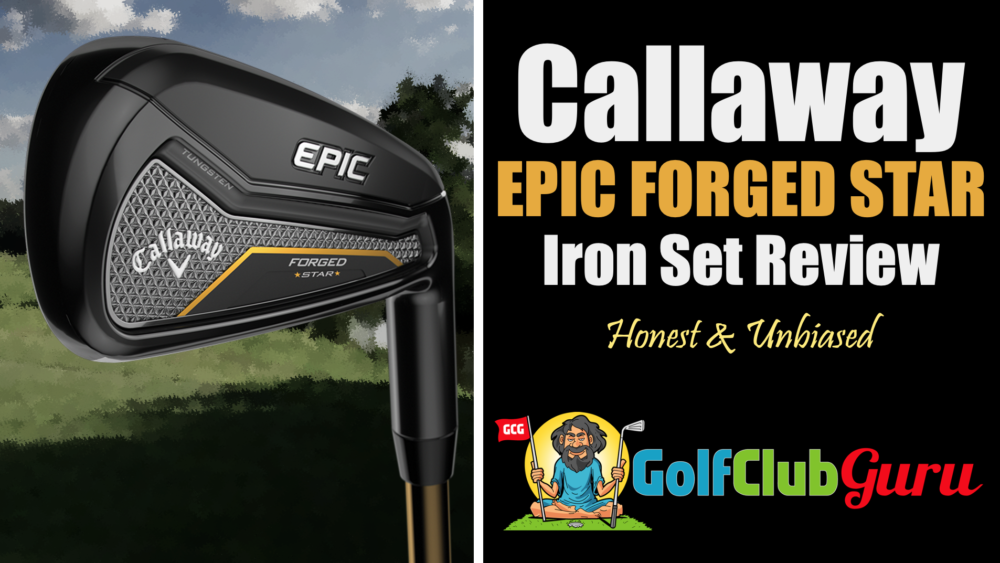 If you are obsessed with hitting your irons as long as possible, then there truly is no better option out there than the Callaway Epic Forged Star irons. But not because they are packed with some new, crazy technology that makes the ball blast off the club face at incredible distances.

The first reason rubs me the wrong way for many different reasons. The second reason is fair. However, keep in mind that a club that is “lighter” may be faster, but is typically less consistent in general.

Appearance: Not everyone likes black club heads. They definitely take some getting used to, but I’m never opposed to trying something different. Although I’ve always played traditional grey/silver club heads, the black isn’t a bad look in my opinion.

As a game improvement iron, the clubheads are relatively thick, but not so thick as to take away from the overall appearance at address. The toplines, offset, sole width, and club face width all are a tad oversized as you might expect.

Performance: There is no doubting it. These truly are the longest irons that I have ever hit. But again, that’s because they are strongly lofted and incredibly lightweight. If you ignore the club number and instead compare the loft performance to other clubs, you’ll still see a small distance increase due to how much weight they were able to save in the club head, shaft, and grip.

The Callaway Epic Forged Star irons were also very forgiving on my mishits, which should be a huge factor in picking an iron set for the majority of golfers. Mishits still flew far and relatively straight.

I won’t lie to you. Distance control is going to be tougher with these than other irons. I was hitting the 8 iron around 170-190, which is a HUGE range that is completely unacceptable for a mid to low handicap golfer. However, my swing speed is simply far greater than the ideal golfer for these irons.

If you are a senior golfer (or just have a slow swing speed) and want the most distance and great feel on your iron shots no matter the price, then this is the set for you.

If you have a moderate to fast swing speed, then don’t go with a lightweight set like this.

If you are happy with how far you hit your irons right now, then don’t fall for the scheme of lower lofted irons traveling further. Of course they travel further… the lofts are lower!

If price is a huge concern, then don’t shell out the money for this overpriced set. Go with my better value alternative below instead.

It was a little tricky to find a lower priced set of irons that were lightweight AND forged. But not that tricky. The Wilson D7 Forged irons are a great lower-priced alternative to the Callaway Epic Forged Star irons.

You can pick up a set of Wilson D7 Forged irons is slightly used condition for around $500, which is far better value than the Callaway Epic Forged Star price.

Wilson’s “D” series of golf clubs has always been their lightweight clubs, and the D7 Forged irons are no exception. While it offers the great feel and sound of a forged club, they still offer plenty of forgiveness and distance that golfers with slow swing speeds want in a set of irons.

I appreciate you reading my blunt review of the Callaway Epic Forged Star irons. Please feel free to leave a comment/question below if you’d like. Thanks!