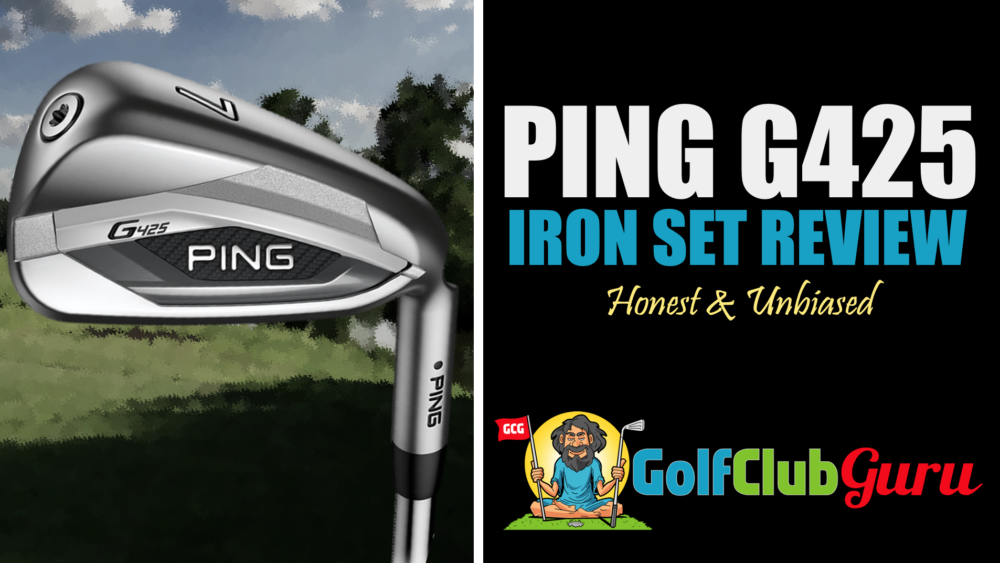 Ping irons are incredibly underrated. I think it’s probably because they 1) aren’t forged and 2) don’t have new releases 3x a year like companies like Callaway and TaylorMade.

While they aren’t forged like most other competitors, Ping’s new irons are incredibly high performing in all important areas (distance, forgiveness, control, feel/sound, etc.). And you wouldn’t be wrong if you said the Ping 425 irons are probably the most durable irons that you can buy, as well as the most compact & appealing game improvement irons on the market.

Here’s our honest review of the new Ping G425 irons.

I’ve always loved the look of Ping’s irons, both at address and while in the bag. At address, it’s just such a clean look with the contrast of grey (the club head) and dark grey (the club face). In the bag, the Ping G425 have a very minimalistic, professional look.

As a game improvement iron, it’s safe to say that the toplines are thinner than most, which gives the club a more compact, appealing look while standing over the ball. There is an average amount of offset (less than most super game improvement irons, but more than the typical players iron).

Taking a look at the club head, it’s obvious that the perimeter weighting is focused extremely low. This is a sign of a very forgiving, high-launch design that most golfers will benefit from. On a similar note, the sole of the club head is very wide, which will encourage the club to bounce off the ground easier as opposed to digging INTO the ground that many higher handicaps often struggle with.

Before I get too deep in how these clubs performed for ME, I want to make one thing clear. My anacdotal evidence is practically useless to you. So, I strongly recommend that you get fitted by a professional club fitter if you can afford it. It doesn’t cost that much by the way ($100-ish).

I was blown away by just how forgiving the Ping G425 irons were. On a day that I didn’t even feel confident over the ball, I truly felt like I couldn’t miss. High, straight shots was all that I could hit. The sweet spot seemed to be massive, which is great for golfers that aren’t able to play everyday and stay on top of their ball striking like they wish they could.

This point is very important: these irons are not the “longest” when compared to some other irons. However, that’s almost 100% because Ping doesn’t “strengthen” lofts like other companies who put a 7-iron loft onto a “9 iron” to make you feel better about yourself. So, if you compare a 30 degree loft club across brands, you’ll find they are all pretty similar when it comes to distance on a perfectly struck shot.

While Ping doesn’t forge their irons, their casting process is so refined that most golfers (especially mid to high handicappers) wouldn’t even notice. They somehow have incorporated the feel/sound/control of a forged iron, while maintaining the durability of a cast iron.

The Ping G425 irons is an iron set that fits a very wide array of golfers. Specifically, this iron set is perfect for golfers that want the look of a players iron (sleek, compact club head) but the performance of a game improvement iron (super forgiving and plenty long).

Oh, a brand new set like the Ping G425 irons is also best for a golfer that isn’t too concerned about money. If money is tight, then ditch the brand new release and go with an older model instead. Older Ping models will perform nearly just as well and at a fraction of the price.

Compared to the older Ping G410 irons, the Ping G425 irons have a smaller profile. The toplines are smaller and club face width is smaller. That’s because the weight was essentially just moved lower on the club head, which can’t be seen while standing over the ball.

The Ping G425 also has a new style club face, similar to their fairway wood faces. This leads to a small, small, small increase in ball speeds  (did I mention small?) due to more flex at impact.

Lastly, the wedges (PW, UW, SW, LW) now include the same deep grooves as their popular “Glide 3” wedge that help control spin on your wedge shots.

Other than that, they are pretty similar iron sets.

If you want a better value option that will perform practically the same, then I’d highly recommend Ping G irons. Are they as long as the Ping G425 irons? Yes. Are they as forgiving as the G425? Pretty much. The weight is also focused very low on the club heads, just like the G425. Oh, and the Ping G irons also have a very small profile at address. I mean, just look at the picture above of the two club heads at impact. Practically the same.

If you are looking for bang for your buck, you can’t get much better than the Ping G irons. You can get a set in excellent condition for around $250, compared to the $900 for the G425 irons.