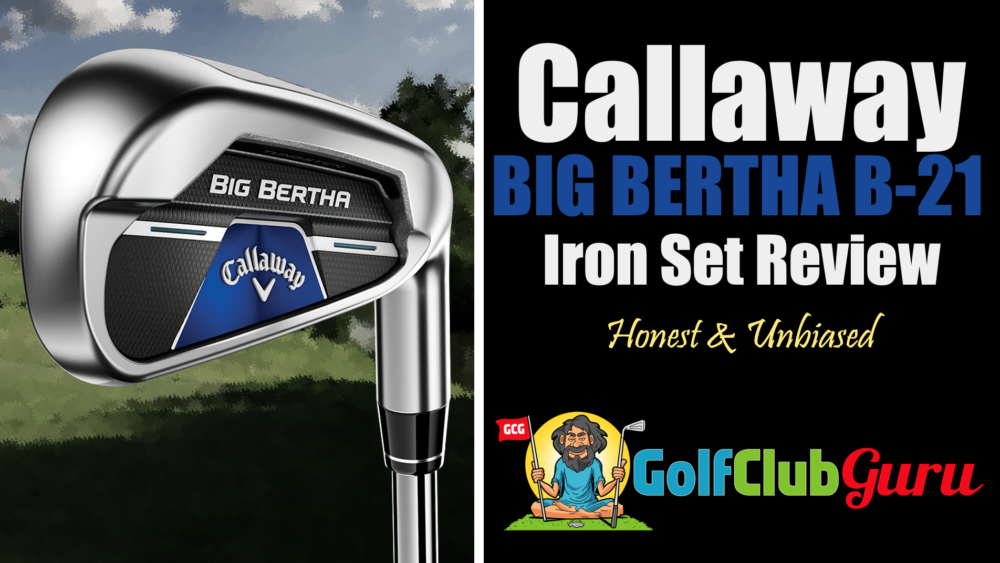 Callaway’s new Big Bertha B-21 irons are meant for the HUGE population of golfers that want more distance and forgiveness. As a “super” game improvement iron, you’ll struggle to find a set of irons that is as easy to hit as these are.

You might think: “if these are as long and forgiving as you say, why doesn’t everyone buy them?”. Well, a few reasons.

To begin with, these are really bulky irons that are not very appealing to the eye. Secondly, these irons aren’t great when it comes to distance control. You may hit your 7 iron 150 yards on a great shot, and then 165 yards on another great shot that felt the exact same as your first shot. What gives? Well, low spin “flyers” are pretty common with super game improvement irons, especially those that aren’t forged. Lastly, bulky irons like the Big Bertha B-21 irons offer no workability, feedback, or great feel at impact that better golfers demand.

Anywho, here’s our honest review of the Callaway Big Bertha B-21 irons.

The Callaway Big Bertha B-21 irons are as bulky as they come, besides the few hybrid-style irons on the market. These irons are meant to be as forgiving as possible, and the appearance backs that up. Huge toplines, tons of perimeter weighting, lots of offset, wide soles, and wide club faces make ball striking as easy as humanly possible. Mid handicaps and better golfers will refuse to play a set of irons so un-appealing as these.

Thankfully, beginners and high handicap golfers won’t mind the bulky, beefy look. New golfers want to see a large club head at address to give them confidence while standing over the ball. Large club faces (and the corresponding large sweet spots) are ideal for new golfers – no question about that.

I’ve hit the Callaway Big Bertha B-21 irons, as well as many of the super game improvement irons just like it. They are all pretty much the same to be completely honest with you.

Long: The Callaway Big Bertha B-21 irons are very long. They launch the ball up quickly and easily, and the strong lofts further add to “increased” distance compared to other iron sets. The PW has a loft of 43, while 45 is pretty standard.

The higher ball flight is due to a super low center of gravity that launches the ball up right off the club face. Golfers that don’t generate much club speed will greatly benefit from the higher ball flights, as they typically struggle with getting enough height on their iron shots to maximize distance.

Forgiving: The Callaway Big Bertha B-21 irons are super forgiving. All of the perimeter weighting and the oversized design makes the sweet spot as large as possible. What does that mean to you? That means that your misses will still fly relatively straight and relatively long.

Less forgiving irons would punish “bad” shots (missed the center of the club face) much more than these will. The large offset of the hosel also makes these easier to hit, as it makes a solid impact position just a little easier to get into (which most beginners and high handicappers struggle with).

Everything else: These irons don’t do anything else (besides distance and forgiveness) very well. Distance control is poor. You can hit 10 “solid” iron shots with the same club and get a variance of 15-20 yards at times. That’s due to the club faces not being forged, leading to some air bubbles in the club head that can launch the ball super far at times if you hit them in a certain spot on the club face.

It’s also hard to hit the ball low, draw the ball, or fade the ball on command. This may sound like a good thing, but sometimes you literally NEED to hit the golf ball low or curve it. It’s simply hard to do so with these super-high-launch irons that just want to go straight.

Beginners won’t notice as much, but the feel/sound of these at impact is nothing to write home about. They sound “loud” don’t feel great through your body at impact. Again, mainly a result of the club faces not being forged.

Pros & Cons (We Like To Be Unbiased, Unlike Other Golf Sites)

Who Should Buy The Callaway Big Bertha B-21 Irons?

These irons are ideal for brand new golfers that don’t plan on needing to upgrade anytime soon.

If you are not a brand new golfer, then I’d highly recommend a set of game improvement irons, which aren’t so bulky and are a little better with distance control (just a little).

If you want a similar set of irons but don’t want to spend $900, then check out the Callaway XR OS (oversized) irons from a few years back.

Like I mentioned earlier, pretty much all super game improvement irons are the same. They are great for distance and forgiveness, but nothing else. With that being said, the Callaway XR OS can be bought for around $300 in awesome condition.

You may be thinking that new clubs (2021 irons) are better than old clubs (2016 irons). Nope. That’s not the case at all. All super game improvement clubs in the past 10 years or so preform pretty much the same. Very small difference if any. There has been little to no improvements in irons in the past decade. As long as your clubs are within 10 years old, you’ll be fine. Especially as a beginner or high handicap golfer, where the clubs don’t matter that much in the first place.

Thanks so much for reading my honest, unbiased review of the Callaway Big Bertha B21 2021 irons. If you have any comments/suggestions/questions, leave a comment below!