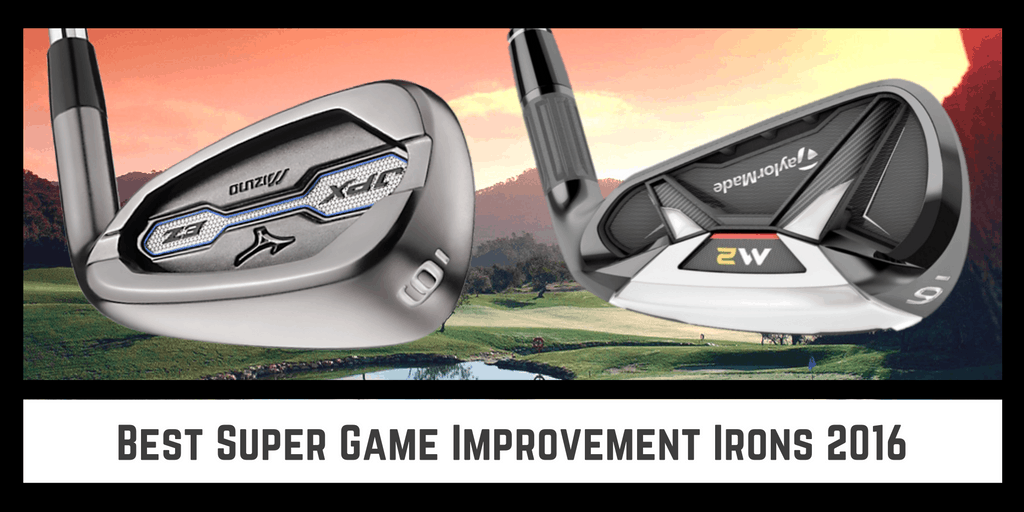 Warning: get used to reading the words “very forgiving” for the rest of this article. Why? Because we are talking about super game improvement irons, and forgiveness is the name of the game. The best of the best = the most forgiving options available.

If you clicked on this article, you are probably a high handicap or beginner golfer who read that this is the category of iron that you should buy. And if you want to make golf as simple as you can, then you are in the right place!

Let me give you a short rundown on what separates super game improvement irons from other irons.

As a reminder, I have hit or reviewed all of these clubs on the range, at demo days, or with a launch monitor. I have also read hundreds of reviews and golf studies/experiments when it comes to golf clubs. I have used all of this knowledge and experience to pick the absolute best super game improvement clubs for different categories (best overall, longest, highest ball flights, most durable, etc). If you have any questions about these clubs, leave a comment below!

Note: want to read more? Check out the best super game improvement irons UNDER $200 or maybe the most forgiving irons on the market.

This article is going to broken up into two different categories. First, I’ll discuss the 2021 releases. New clubs = high demand = high price. The bottom section will be discussing better value options that were released many years ago. Older clubs = lower demand = lower price (but pretty much the same level of performance).

Callaway Mavrik Max irons are about as forgiving as they come in an iron shape. Super clunky. Lots of perimeter weighting. But that’s what you want! Easier to hit irons = more greens hit = lower scores overall.

Callaway recommends the Mavrik Max irons for 15-36 handicaps, but please note that those are just suggestions. A good friend of mine that is a single digit handicap still swears by his super game improvement irons – no joke! There is truly no shame when something makes the tricky game of golf easier.

Now, there are some downsides here. Distance control can be difficult, as a cast (not forged) club head that has some air bubbles which could add/subtract 5 yards or so on a perfectly struck shot.

TaylorMade releases irons nearly as often as Patrick Reed blames the green for missed putts. Their latest release, the SIM series of clubs, has been crazy popular so far. If you are looking for a great set of super game improvement irons, check out the oversized option, the TaylorMade SIM Max OS irons.

Most of TaylorMade’s game improvement irons are pretty oversized to begin with, to cater to the LARGE population of golfers looking to add distance and forgiveness. However, the SIM Max OS irons have even wider soles & lower centers of gravity to truly offer the most forgiveness that they could, without breaking any USGA regs.

It’s worth noting that the top lines of the TaylorMade SIM Max OS irons are a little bit less clunky than the Callaway Mavrik Max irons, which is a plus in my opinion when it comes to appearance at address.

TaylorMade touts their “ECHO Damping System for better sound and forged-like feel”. I call BS. The SIM Max OS irons feel and sound just as dull at impact as all of their previous cast irons do.

Cleveland has produced, in my opinion, the highest quality hybrid style irons on the market for the last 5 years. Their previous model, the Cleveland Launcher HB irons, had some of the highest reviews when it comes to forgiveness on off-center hits. Their newest set, the Cleveland Launcher HB TURBO irons, are practically the same. Personally, I’d go with the older model just for the price savings.

The PW starts off with just a bit of perimeter weighting. Then each club, as you move from the PW to the 4 iron, gets a little bit more forgiveness. After all, the longer irons with less loft are the clubs that are tougher to hit.

Aside from the forgiveness factor, most golfers see an increase in both height and distance of their shots. However, it really just depends on the previous iron set that you are playing. If you are upgrading from a super old (10+ years) set, then I’d be shocked if you don’t see a 10+ yard increase in distance for each club.

Cobra practically had the entire market when it came to hybrid iron sets with their Baffler sets many years ago. Their new model, the Cobra T-Rail hybrid irons, are a huge upgrade in distance, forgiveness, and appearance. I personally love the all black look.

As a super game improvement iron, I’m a huge fan of the incredibly wide soles. The sole just bounces off the turf, as opposed to the digging that can often happen with high handicappers.

Most golfers don’t like the look of hybrid style irons, but they still want as much forgiveness as possible. If you want super game improvement irons that look and feel like an iron, then the first two options are better for you.

If you TRULY want the most forgiveness possible, then you need a set of hybrid style irons. The extra perimeter weighting behind the club head truly optimizes performance on off-center strikes.

Many golfers have traded our their long irons (3-5) for hybrids, but there is no need to stop there if you don’t want to! Hitting hybrid 6-PW is still an option. Don’t be ashamed by what your friend may think. Playing good golf is more fun. Playing bad golf is less fun. Hybrid style irons can help you play better golf more often.

Are super game improvement irons best for me?

Considering that I don’t know you personally… hard to say. If you want the most forgiveness possible, though, then yes. As long as you are ok with giving up distance, feel, appearance, workability, feedback, and distance control.

What are the pros and cons of using super game improvement irons?

The pros are that these are the most forgiving irons that you can hit. Golfers hardly ever hit the ball exactly like they wanted, so it makes sense to use a super forgiving set of irons. If you miss the center of the clubface by one inch, you’ll end up far better with a set of SGI irons than other iron types.

There are lots of cons – I won’t lie to you. The cons are that the irons lack feedback, workability, feel, distance control, and appearance.

Who benefits most from super game improvement irons?

Why are super game improvement irons so easy to hit?

The super low center of gravity allows the ball to be launched in the air faster than other irons. Higher, faster launch = better chance of a solid strike with little side spin.

From this point on, all of the options will be the better value super game improvement irons that you can buy. I actually wrote this portion of the article about 5 years ago (where has time gone????). You can probably tell from the hideous pictures. As of now, the iron sets are FAR BELOW their original retail price, though. And I can just about guarantee that they will perform just as good as the 2021 options for a fraction of the price. 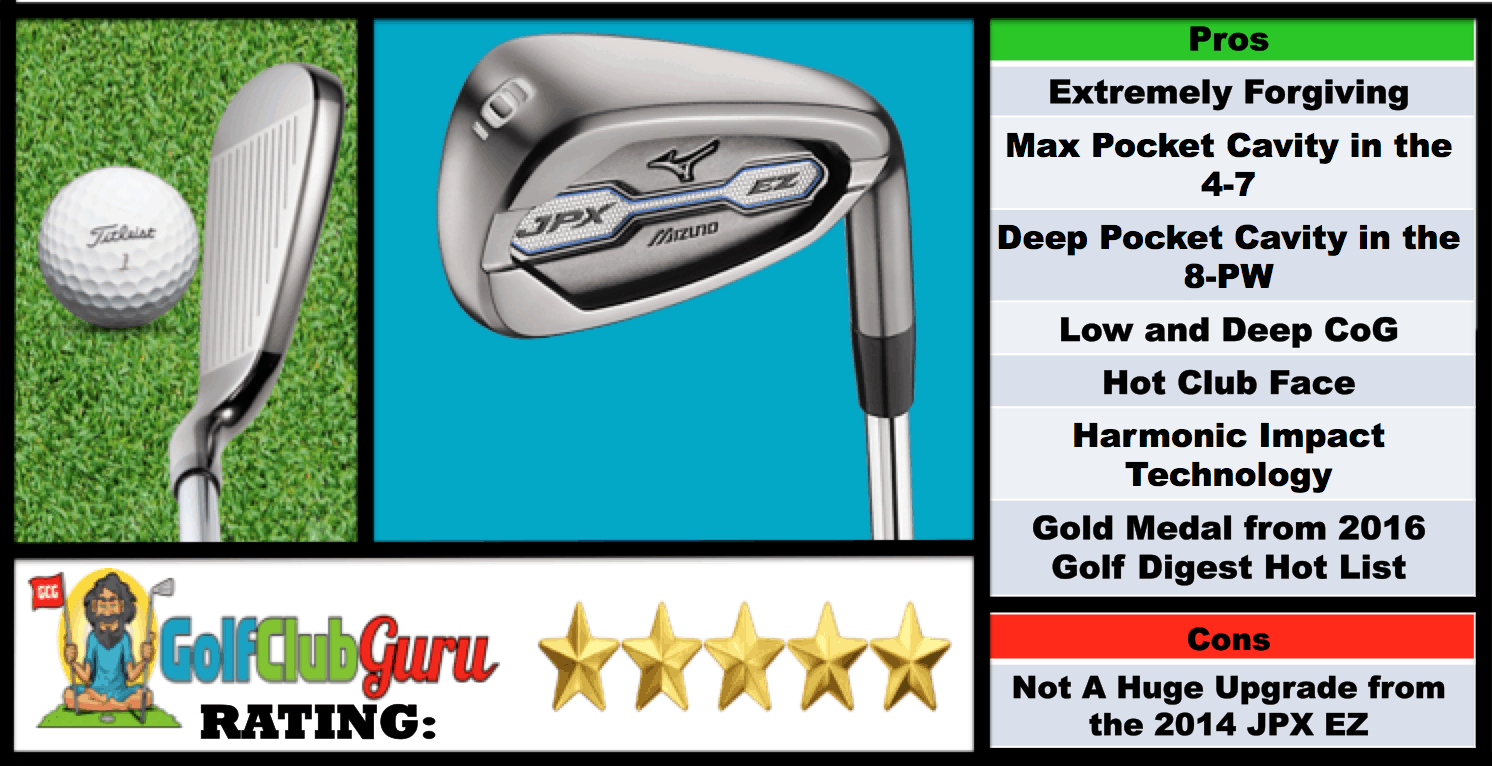 The Mizuno JPX EZ irons have a LOT going for them. It’s a lot easier to list the benefits, so let’s do that:

One of my favorite guys on YouTube, Mark Crossfield has a great review of these clubs below:

Because they are the best mix of distance, control, feel, and forgiveness, the Mizuno JPX EZ set is my #1 pick for super game improvement irons. 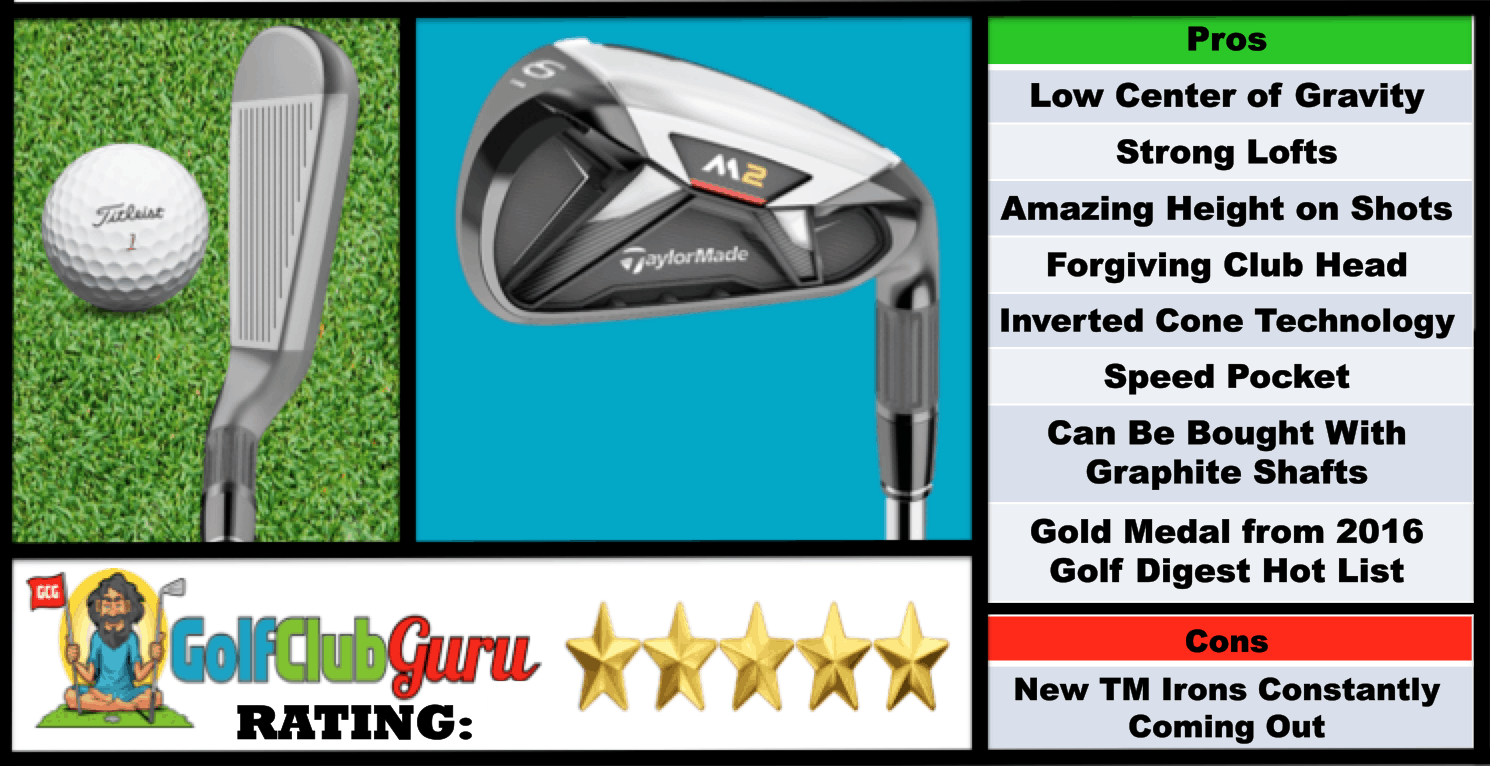 Length is important, and it makes the game more fun. There is no doubt about that. If you would rather have the longest irons that you can, then the TaylorMade M2 irons are for you. To be upfront about them, though, they don’t feel incredible at impact like the Mizunos. If this is not a priority for you, and you’d rather have the 4-5 extra yards, get the M2’s!

These clubs are made with very strong lofts (AKA their 7 iron might be your 5 or 6 iron), which makes the ball fly very long. If you are wondering how they use stronger lofts and still have good height on the shots, that is because the COG is very low. Other technology that increases the distance and makes these the longest irons are the inverted cone technology and the famous speed pocket. They both increase ball speeds across the entire face. The result? Shots hit off center still end up pretty well, as opposed to flying way off target. As high handicap golfers, this is a HUGE benefit.

Another great thing about buying TaylorMade irons is that they come out with new products 3-4 times a year. With each new release, the prices of clubs drop pretty significantly. So, if you are patient, you can buy this set of clubs for a great price in a year or so. Or, you can look at our list of best valued irons that you can buy today. 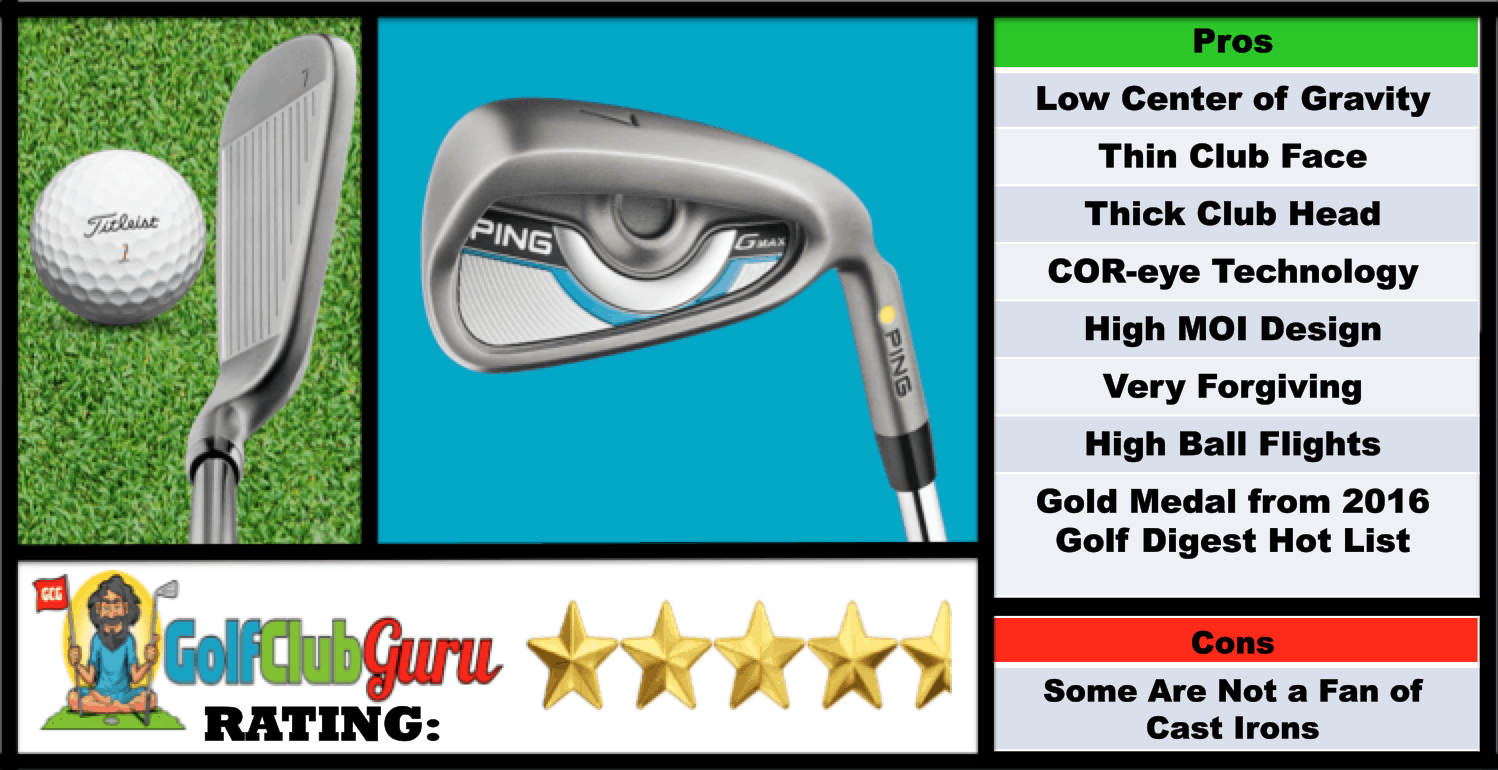 Golf club purchases in reality are investments in your game. A characteristic that often goes unnoticed is the durability of clubs. If you buy clubs that break or wear down very quickly, you will have to keep spending more and more money to buy new clubs. However, if you buy a set of reliable Ping irons, like these Ping GMax irons, you will be set for many years and hundreds of rounds or practice sessions.

The Ping GMax irons are extremely durable because they are made of cast, stainless steel. The grooves will not wear down anytime soon, and you can guarantee a reputable company like Ping has incredible customer service in the event of something breaking unnecessarily.

Aside from their durability, these clubs still have a lot of characteristics that you should look for in super game improvement irons. For example, they have low centers of gravity, forgiving club heads, and result in high ball flights.

The only con is that some golfers are not a fan of cast irons, but as beginners and high handicappers, you probably won’t notice the difference. As a result, this should be high up on your priority list for new irons. 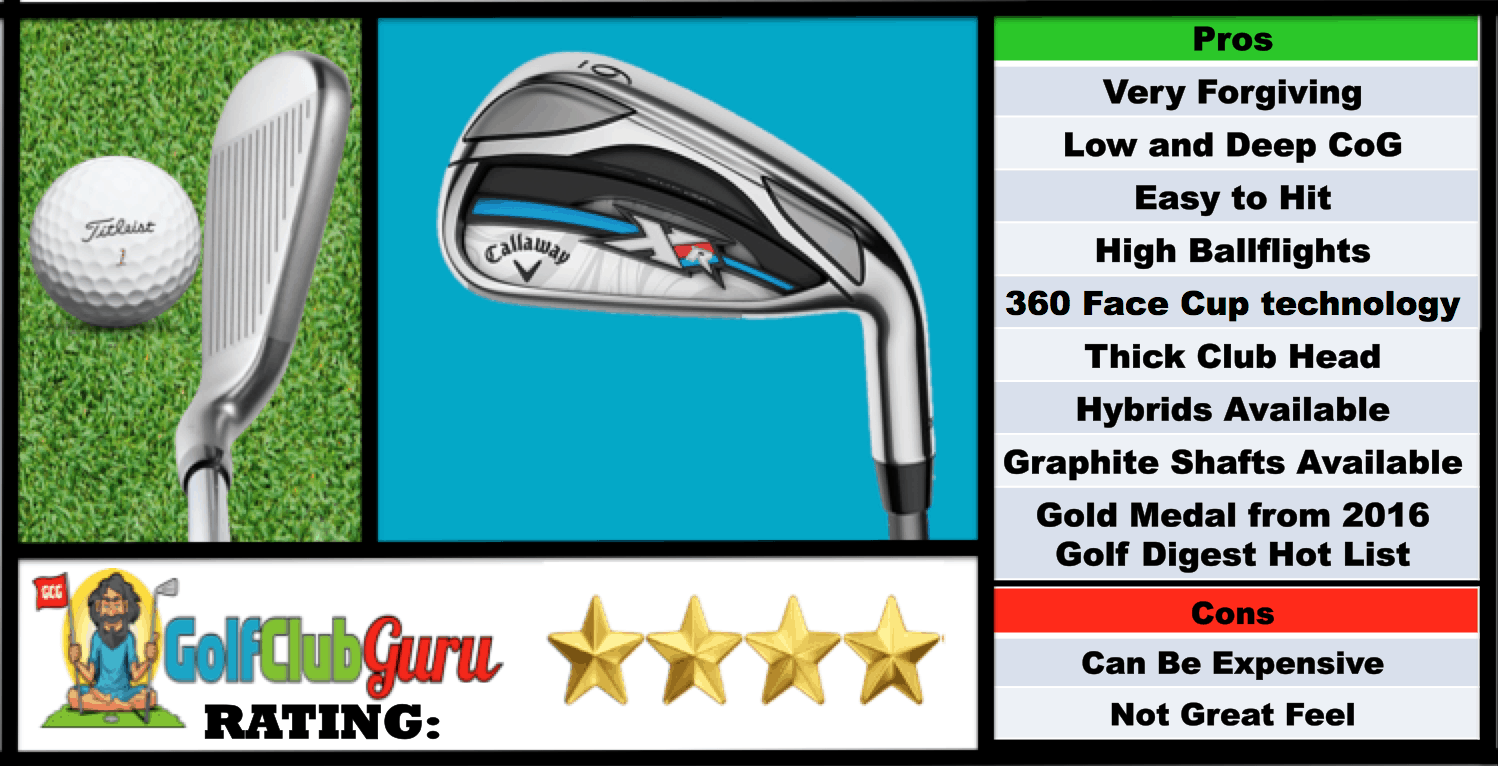 Are you a fan of the thickest club heads that you can buy? If this appearance suits you, the Callaway XR OS irons are well suited for you. They have the largest club heads of 5 listed in this article, as they are targeting those looking for forgiving irons. Like the other irons, they have low COG’s for higher, softer ball flights.

If you like the clunkier club heads, you might also be a fan of substituting long irons for some hybrids. If this is the case, consider buying a combo set (irons and hybrids), because the XR OS hybrids are very high quality and perform well. 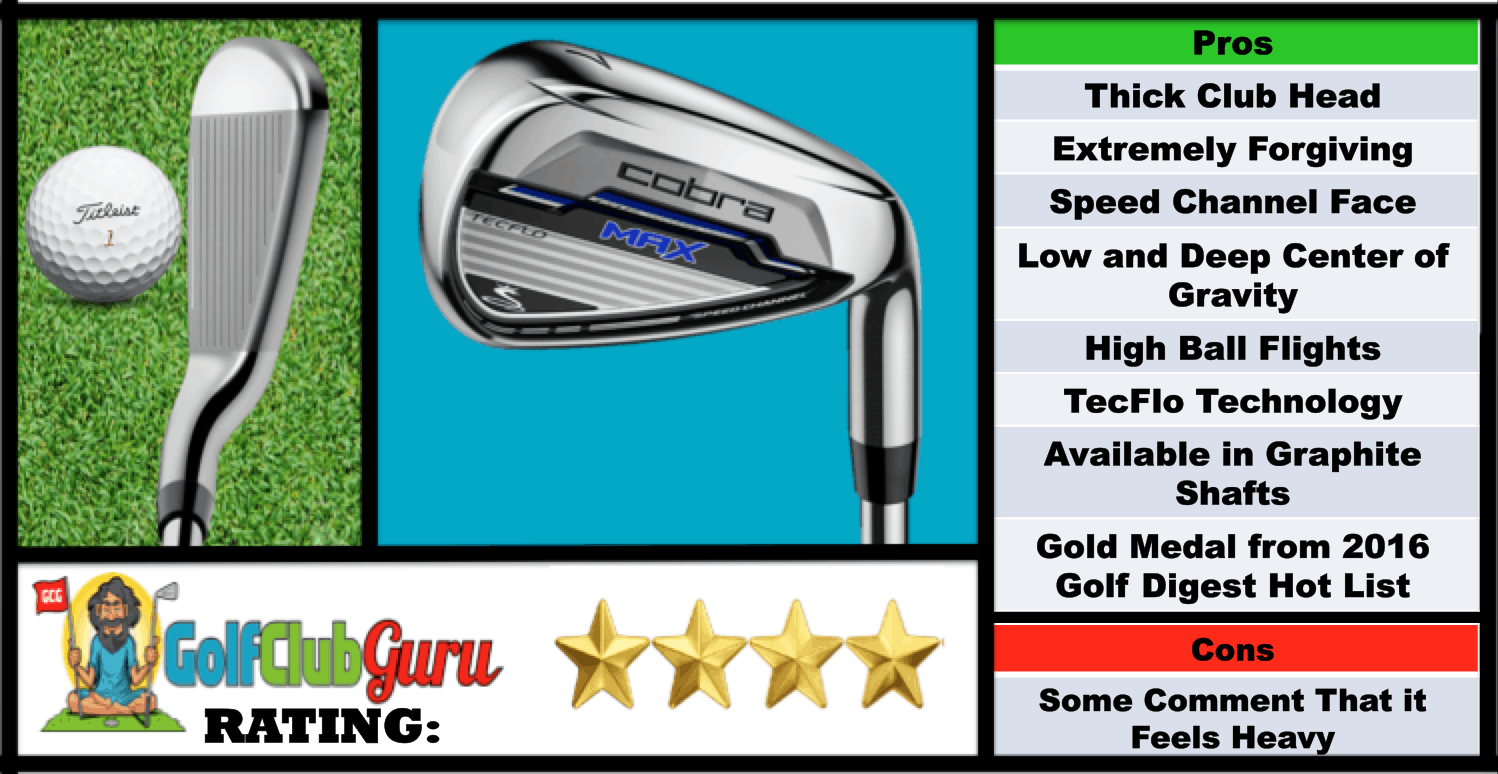 For those of you that are looking for a heavier club (more feel, but a little less distance), then look into the Cobra Max irons. The club heads are pretty heavy, which some find helpful for consistency. If you are not very strong or flexible, though, I would avoid these and stick to something lighter for more power. Either way, I thought I would mention this option for those that it might benefit.

One differentiating factor that these irons have are the TecFlo Technology. TecFlo uses a partly hollow technology design in the longer irons (to improve forgiveness) and a cavity back design in the short irons to improve control.