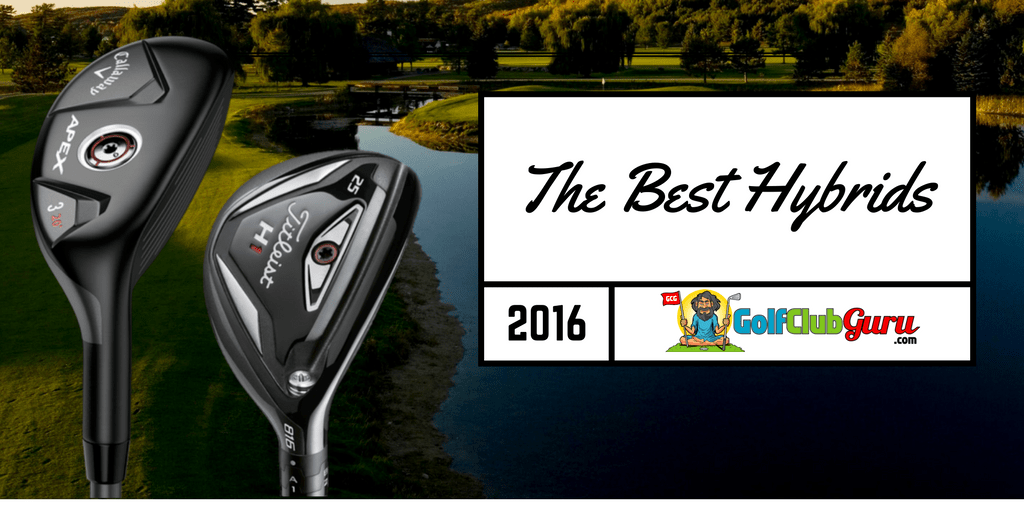 If you have read any of my other articles, you probably already know how big of a proponent of hybrids that I am. Who wouldn’t be? They are more beneficial than long irons for two important reasons:

I want to give you the full rundown on hybrids. For that reason, I want to discuss the two downsides to hybrids. However, I am going to tell you why these are hardly downsides, and I think it will be clear that the pros of substituting a hybrid outweigh the cons pretty easily.

Now that you know a little more about why you should game more hybrids, here are my top 5 hybrid picks from 2016!

Note: you may also be interested in the best VALUE golf hybrids (under $75) and the easiest to hit, most forgiving hybrids on the market.

There have been plenty of high performing hybrids released in 2021. Yes, they are a little pricey, since they are new and demand is high. Personally, I’d scroll down to the “Better Value Options” and save a buck or two by purchasing a used hybrid that will perform practically the same as the new 2021 hybrids.

The G410 looks great at address, launches the ball high, and has a really flat sole design that I prefer.

The Callaway MAVRIK Max hybrid is considered a “super game improvement” hybrid. It’s oversized, has a huge sweet spot, and is as forgiving as they come.

It’s definitely meant for higher handicaps, but there is not shame in picking clubs that are easier to hit. Plus, hybrids were literally DESIGNED to be more forgiving, as they are replacing your difficult to hit long irons.

The weight is focused low and back in the club head. The result? Super high launching shots that can actually stop on the green, unlike your low-flighted long iron shots.

Versatility is an important factor in choosing golf clubs. As much as you wish, you won’t be playing from the tee box or fairway on every shot. You’ll be hitting from dirt, tall grass, some weeds, some pinestraw, etc. A smaller profile hybrid will perform much better than a large, oversized hybrid like the Callaway MAVRIK Max.

The TaylorMade SIM hybrid is as versatile as they come. I’d consider it a “player’s hybrid”, along with most hybrids that TaylorMade produces. Their soles are more curved (not as flat as Callaway and Ping hybrids).

The TaylorMade SIM hybrids will allow you to hit betters shots from imperfect lies. However, I do think they are slightly harder to hit than the Ping and Callaway counterparts in general.

How many hybrids do I need?

There is no perfect answer here. One or two hybrids is the most common choice, with some women and seniors gaming 3. Personally, I just have one, but that’s what is best for MY game.

You need more hybrids if:

How are hybrids “easier to hit” and “more forgiving” than long irons?

What’s the best VALUE hybrid that I can buy today?

Personally, I think my current gamer, the Titleist 910H hybrid, is the best value hybrid on the market. You can pick one up for around $30 in good condition, which is far below the original retail price of $230.

It’s a great all around hybrid. Good distance, good look at address, decently forgiving. I have no reason to upgrade mine, as the newer options are practically the same exact clubs but with significantly higher price tags.

Should I replace my long irons with hybrids?

Most likely, yes! I’d wager that 95% of golfer will perform better (read: have more fun) while using hybrids in place of their long irons (3,4,5 irons). Easier to hit = lower scores = more fun. Always.

Unless you simply consider long irons the strongest part of your game, then I’d highly recommend replacing AT LEAST your longest iron with a hybrid. If you like it, then you can replace more long irons later.

Looking to save some money? These options are older, more affordable, and will perform nearly just as well as the newer hybrids. 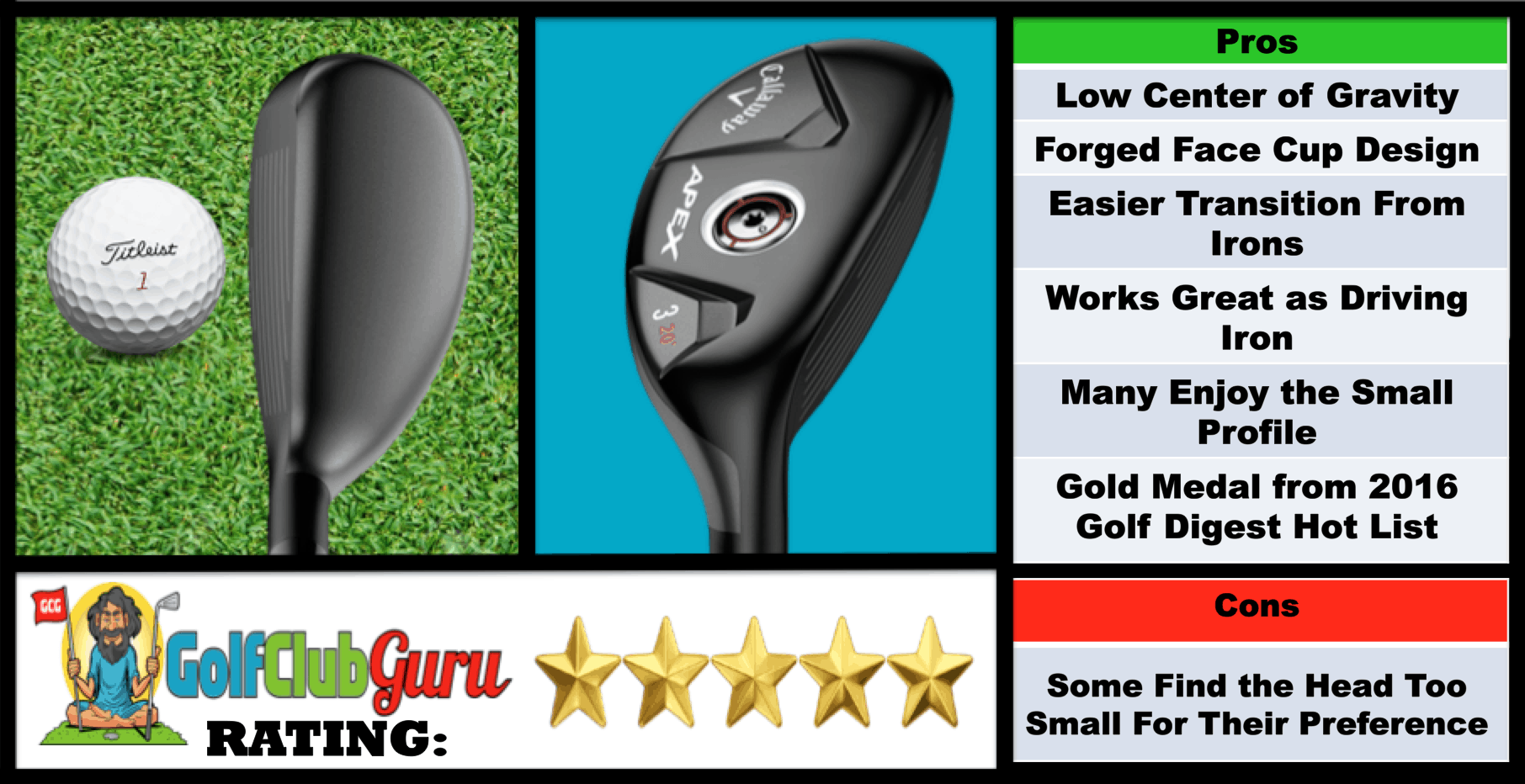 For the best overall performer, the Callaway Apex hybrid takes the gold. It is the best mixture of distance, forgiveness, design, and appearance. You can’t ask for much more than that!

Let’s talk about some of the features/benefits of this hybrid: 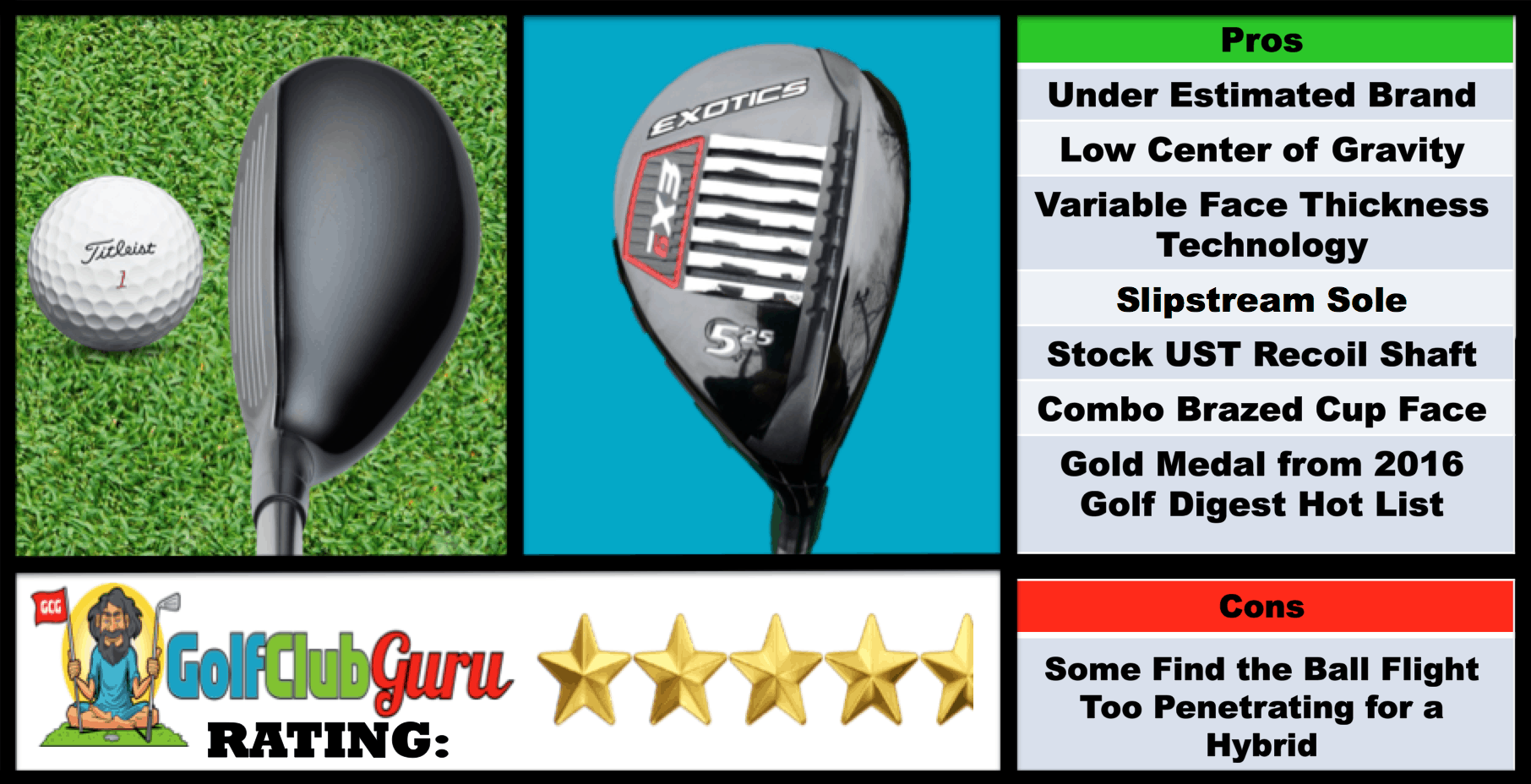 Easily the most underrated brand when it comes to hybrids, Tour Exotics has produced some incredible clubs in the past couple of years. With the Tour Exotics EX9, you will get a club that most of your buddies have never heard of. However, they consistently get top reviews from all around the golf community. The main thing that sets them apart from other hybrids is the SlipSteam sole, which increases ball turf interaction and therefore increases ball speed and overall distance.

To discuss the design, the club is made with Variable Face Thickness for forgiveness on off center strikes and maximum ball speeds on center hits. This way you are rewarded for balls hit on the sweet spot, yet your misses might land short of nearby trouble.

The last benefit is the premium stock shaft, the UST Mamiya Recoil. For a stock shaft, this is an excellent offering, and I hope Tour Edge continues to offer this benefit for future releases. 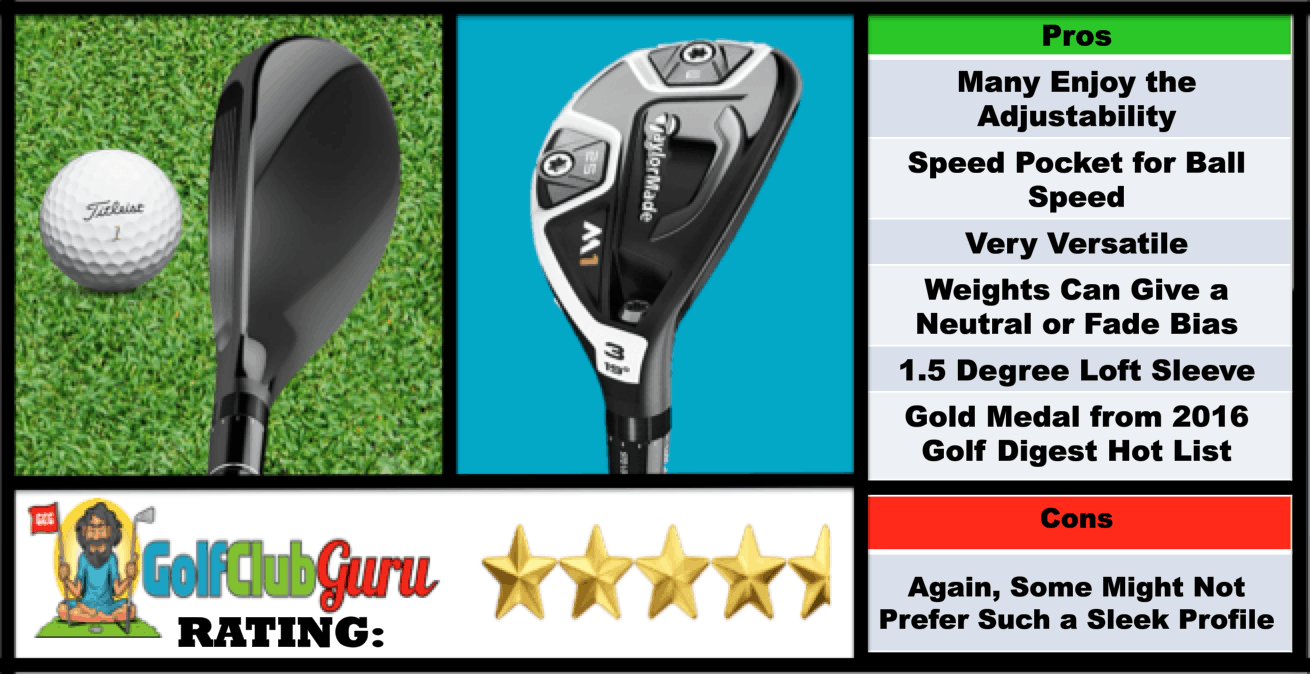 I know many golfers who love the look of tiny profile clubs. If you are one of them, then the TaylorMade M1 hybrid is for you. It’s got the smallest club head that you will find on a hybrid, which in turn makes it one of the most versatile clubs. Some people refer to it as a rescue club, which is typically just a smaller designed hybrid.

It has got two adjustable weights that can offer a neutral bias or a fade bias (more weight closer to the toe). I personally am a fan of hitting high, soft landing fade hybrids into greens, so this would suit me well. Speaking of adjustability, you can also adjust the hosel to increase/decrease loft 1.5 degrees, which is great for someone that can’t choose between a 3 and 4 or a 4 and 5 hybrid. It’s famous Speed Pocket got a shape design change, but it still serves the same purpose as before, to increase the rebound effect at impact. 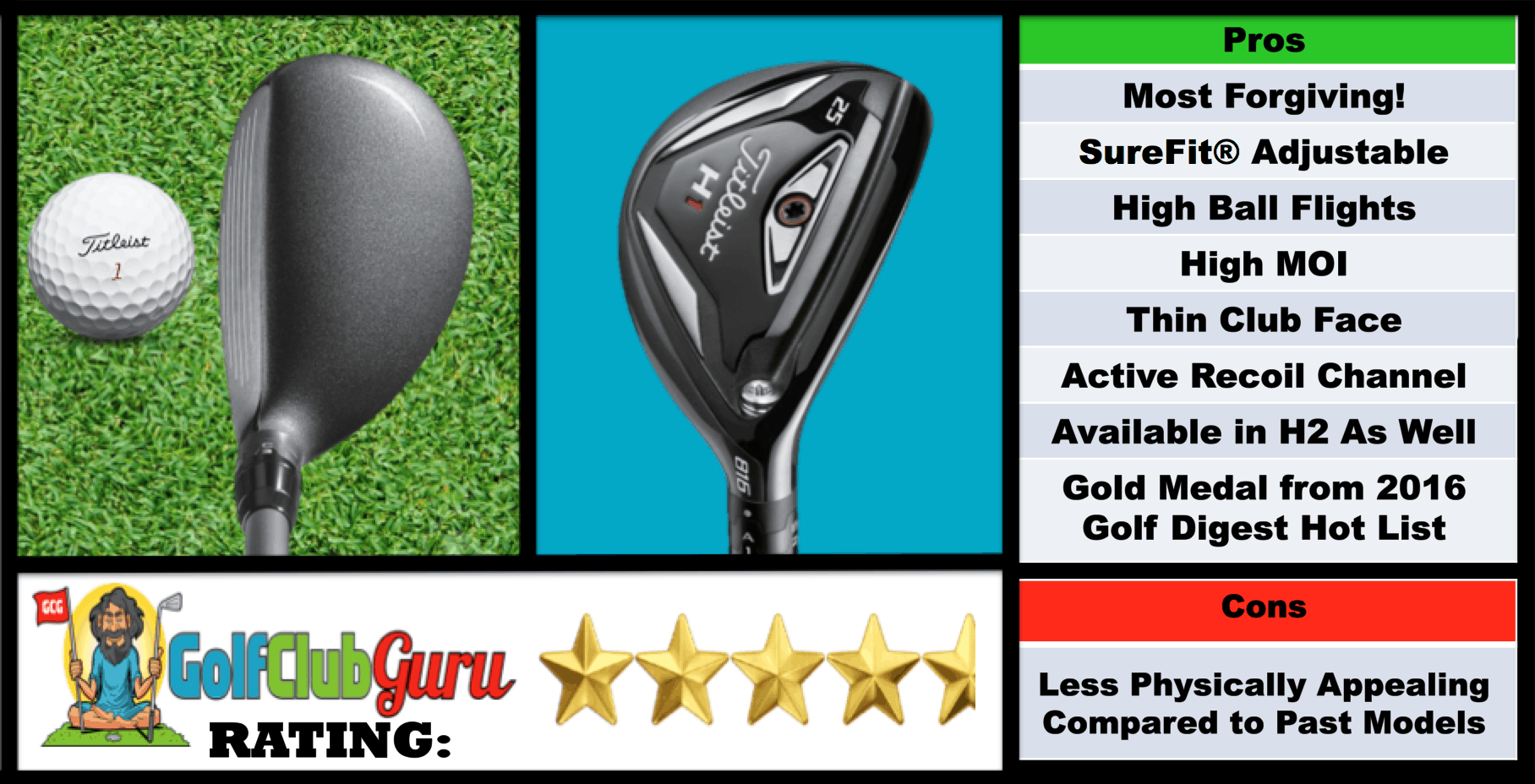 The most forgiving of the bunch is the Titleist 816H hybrid. It felt like anywhere on the face flew high and straight. This is probably due to the high MOI design. Basically, the higher the MOI, the less the face twists at impact and therefore the better the result on mishits. Aside from its forgiveness, the club is also adjustable and results in great distance: 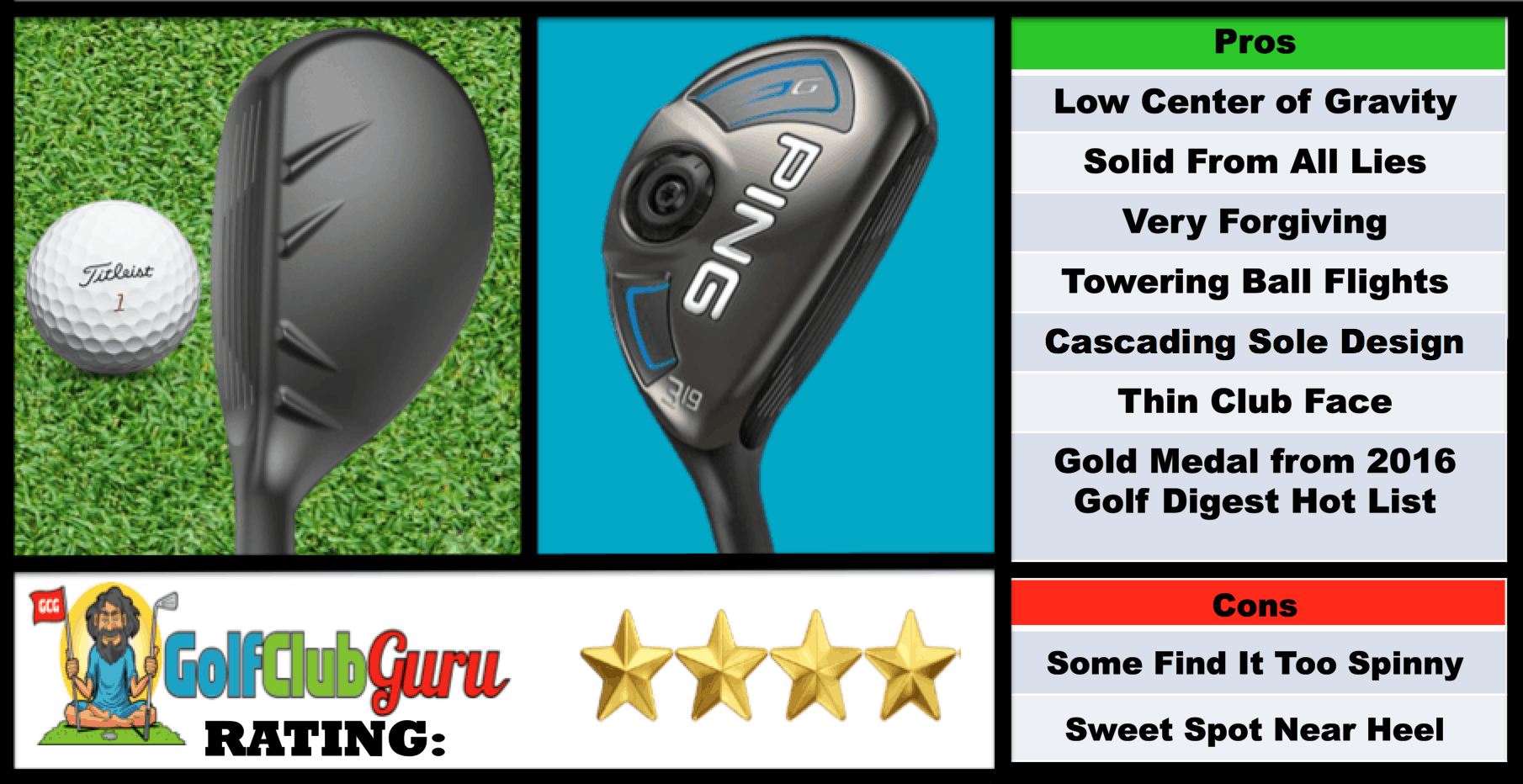 For those looking for the highest ball flights possible, the Ping G hybrid is where you should look first. It’s got a very low and back center of gravity, resulting in the highest launches I have ever experienced. For someone that struggles to get the ball off the ground with hybrids or long irons, this club can only help.

Distance wise, the Cascading Sole Design is intended to increase ball speeds on the entire face. This paired with the thin club face resulted in above average, but not extraordinary, distances. I will say that I noticed that my best and longest shots made contact a little closer to the toe than I would typically expect. However, I didn’t see this being a problem.