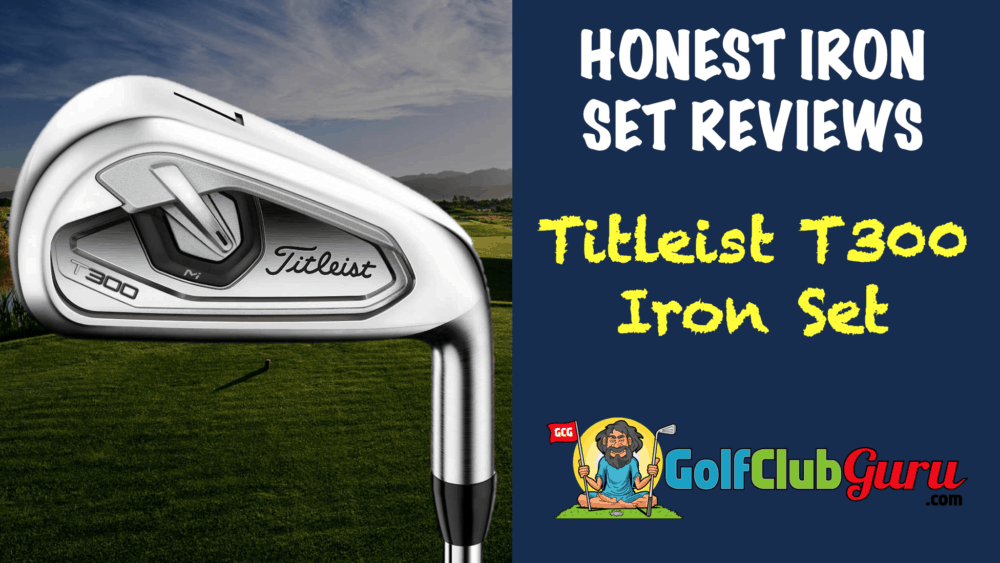 The Titleist T300 irons, the “game improvement” iron set of the T series, is a great option for those needing the extra forgiveness. Will it fix all of your chunks and thinned shots? Nope, you are on your own there… sorry. But it WILL make your slight mishits more playable. Missing the center of the club face by a bit won’t be penalized like it would with the T100 and T200 irons.

I got to hit all of the Titleist T series irons last weekend. While talking with the head pro and fitter, they said the T100 series is by far the best selling iron they’ve sold of the three. Unfortunately, the top seller SHOULD be the T300 irons in my opinion. Most golfers need more forgiveness in their iron set than they currently have.

While hitting the T300 irons, I was blown away by the height and distance on my shots. Lots of straight, high, long shots when hit like I wanted to. My mishits, more importantly, still ended up relatively OK.

Although we can’t recommend the T300 irons from a financial stand-point, we’ll still give an honest breakdown of a few important characteristics of the set.

Let’s be real. No one wants to play big, bulky irons. The bulkier an iron, the less attractive that iron is at address. However, the “bulk” of irons typically comes from perimeter weighting that is instrumental in the forgiveness of an iron. As a result, hiding that perimeter weighting so that it can’t be seen at address is an attractive characteristic in an iron.

Aesthetically, the T300 are far more attractive than their predecessor AP1 set. They have a lot more pop to them, and the black/silver color combination looks a lot more professional than the red in the AP1.

When you get a chance, check out out the sole of the T300 series. It’s much wider than the other T series sets. This increased “bounce” makes it easier for the long irons to glide through the ground, instead of getting stuck and leading to a fat shot.

This set is about as long and forgiving as they come. If your goal is to hit more greens in regulation and maybe add a few yards from your previous iron set, this is a great option. It’s partly due to the shaft, but I was also launching shots far higher than other iron sets on the market. So if you struggle with getting enough air on your shots, the T300 irons could be the set for you.

Unfortunately, that typically means that the feel and distance control are lacking – which is exactly the case. I was hitting my 7 iron anywhere from 170 to 185 yards. That 15 yards may not sound like a big dispersion, but 15 yards is HUGE when you are trying to be aggressive on birdie opportunity holes. Fortunately for mid to high handicaps, though, the extra distance and forgiveness and are far more important and helpful than the lack of distance control.

Price: Not Ridiculous, But Still Not Worth It (In Our Opinions)

For a new set of irons, anything under $1,000 is pretty rare these days. Let along from Titleist, the most prestigious company in golf.

However, we still know how many hours you have to work to be able to pay for a $900 iron set like the Titleist T300 irons. As a result, we can’t recommend this set unless your budget simply isn’t an issue at all. Assuming your budget does come into play here, we’d recommend sticking with the older model, the AP1 set. We’d recommend the 714 or 716 set, as they are 4-6 years old, which leads to a great value overall.

It’s worth noting that there are some slight design modifications (aside from the new paint job) between the two sets. However, the end result will practically be the same. High shots, lots of forgiveness, and good distance. The difference between the two would be a matter of 1-2 yards more likely than not. For the price savings of ~$550, we think it’s a pretty obvious choice. But your budget and desire to have the latest and greatest may determine otherwise.