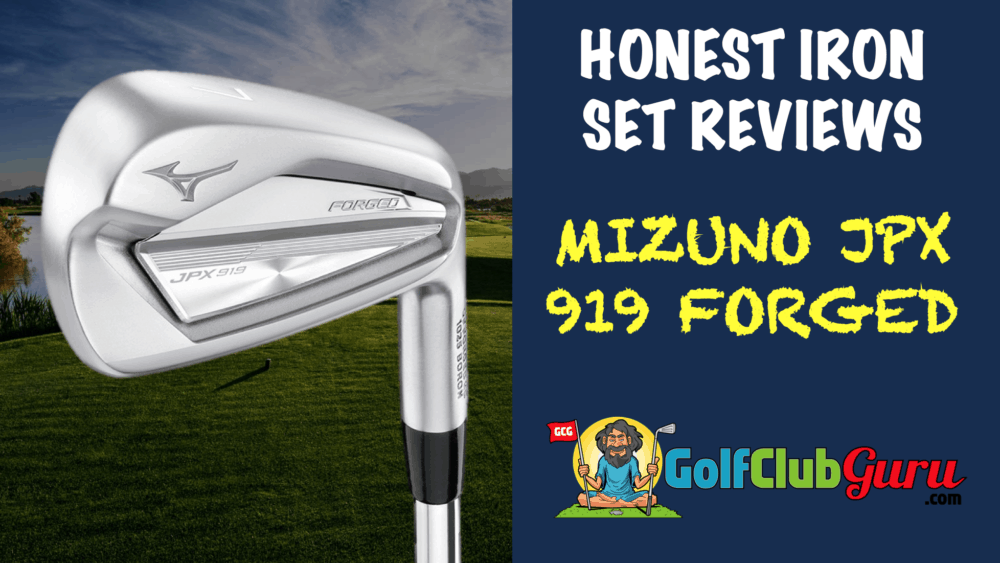 The best way to sum up the Mizuno JPX-919 Forged irons? Forged design but with game improvement technology.

Today, there aren’t a ton of options for mid-handicap golfers that want a forged club. They find themselves stuck between forged players irons and cast game improvement irons. The Mizuno JPX line of clubs is a great middle ground – offering the great feel of a forged club, but retaining the perimeter weighting for forgiveness.

We got the chance to try out the Mizuno JPX-919 Forged irons at a local demo day, so we’ll talk a little about our thoughts on the set. Overall, awesome set of clubs. Practically no golfer could go wrong picking this set up. However, if you want a cheaper option, go with an older JPX set, as there is hardly any difference in the newer JPX models.

The topline on the Mizuno JPX-919 Forged irons is slightly larger than most players irons, which is probably beneficial for the majority of golfers. Many mid-high handicap golfers get a little afraid of a thin topline, as they know that means little forgiveness and margin of error.

Overall, this set is absolutely gorgeous. I really like the all silver design, as opposed to the black/blue designs of the JPX 919 irons.

Taking a look at the clubhead, you can tell just how much perimeter weighting is built around the club. It’s obvious that this is one of Mizuno’s most forgiving club models.

While testing the Mizuno JPX 919 Forged irons, my well-struck shots felt INCREDIBLE off of the club face. More importantly, though, my misses were not punished hardly at all. They didn’t feel as great at impact, but they results were not very different than my perfectly struck shots. That’s a rare characteristic of a forged iron, as most forged irons are difficult-to-hit players irons with thin toplines and little perimeter weighting.

At a crazy price of $1,150 for a new set of the Mizuno JPX 919 Forged irons, we’d recommend you choose another option, unless you have a huge budget.