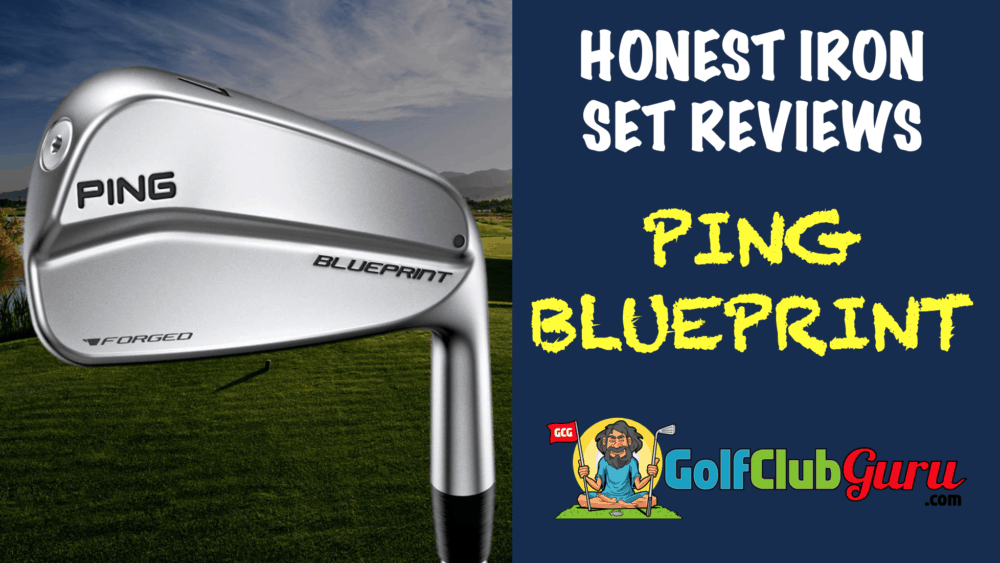 The Ping Blueprint iron set is absolutely stunning. It’s hard to beat the look and feel of a forged blade. Not only that, but I’m positive you’ll become a better ballstriker by gaming a set like this.

However, there are two important caveats that I’d like to make clear:

Regardless of the two caveats, I highly recommend the Ping Blueprint irons if you have the money to afford them.

I can’t speak more highly of the appearance at address. Blade style irons are the most attractive irons at address without a doubt. A main difference between most Ping players irons and this iron set is the smaller sole. Ping irons are known for having wide soles that bounce off of the ground and are less likely to get stuck in the ground on a steep swing.

However, this set has very narrow soles, which are great for versatility. You’ll have better results out of hard lies like fairway bunkers and thicker rough with the Blueprint irons.

Better players will like the small amount of offset and thin profile, while average ballstrikers will likely be a little anxious at address.

Control and feel. If those aren’t the words that you are looking for, then this isn’t the set of irons that you should be looking at. This set offers the most control compared to other sets that focus more on distance and forgiveness.

The feel of the Ping Blueprint irons set at impact is unreal. The forged club head paired with the blade design result in an awesome sound and feel at impact. It’s a very muted sound, which makes it feel like you are hardly hitting the ball at all.

Due to the forged design, which Ping has absolutely mastered over the last few years, there are very few air bubbles in the club heads. That results in consistent distance control when hit on the center of the club face. Non-f0rged clubs, on the other hand, have more air bubbles that result in large inconsistencies in distance.

Something that doesn’t get talked about enough: there is more to golf than scoring well. Personally, I get a lot of joy out of hitting forged blades. Even if my mishits are punished more, which could result in higher scores, the benefit of flushed irons shots far outweighs the downsides. You’ll have to determine which is more important to you, though: scoring well or really enjoying the control and challenge of blades like the Ping Blueprint irons.

At a whopping $1,500, we unfortunately will have to recommend different clubs to our viewers than the Ping Blueprint iron set. We always encourage golfers to save money on clubs and spend their money where it really matters… golf balls. Just kidding, we mean golf lessons.

We’ve said it time and time again. Blades are all pretty much the same. Therefore, if you want to play a set of blades, why not go with an older model that performs nearly the same. That way, you can save over $1,000 and get similar results.

A great model that we like to recommend are Titleist MB irons. A 714 and 716 series of this model can be picked up for around $400. The difference between the Titleist MB irons and the Ping Blueprint irons? Mostly just the paint job, honestly.