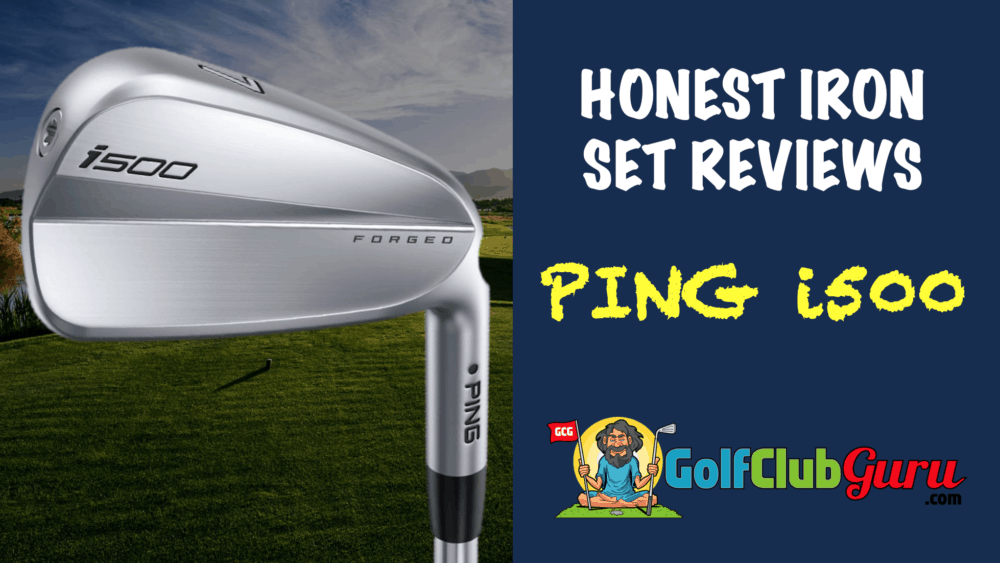 An Honest Review of Ping i500 Irons

Blades are blades are blades. That’s our normal way of thinking, which is 99% right. However, blades can vary MARGINALLY when in regards to feel, forgiveness, distance, etc.

The Ping i500 is a set of forged blades… that means they are generally unforgiving. In exchange, when hit on the center of the club face, you’ll be rewarded with incredible distance control. You’ll also be rewarded with exceptional feel.

The main difference between normal blades and the Ping i500 is the wider sole, which results in a tad bit more forgiveness compared to traditional, narrow soled blades. It’s worth noting that this difference is very marginal. Like we mentioned, blades are blades are blades.

Let’s break down this honest review of the Ping i500 iron sets.

Appearance: Slim & Sexy, Unlike Your Girlfriend

A huge benefit of blades, in our opinion, is the compact appearance. It’s sexy. It’s cool. It’s hip, like your grandad that keeps saying “yolo” like it’s 2012.

The sleek, slim profile of blades makes you feel like a boss at address. Who needs that perimeter weighting anyway? You’ve got the confidence to hit the center of the club face and not break your hands by thinning an iron shot in freezing cold temperatures.

At address, you can’t even see the larger-than-normal sole. Huge benefit when it comes to the appearance. Sorry about that burn earlier against your girlfriend, by the way. I’m sure she’s a nice man. I mean lady.

Performance: Like a Blade… But a TAD More Forgiving

I had an awesome time on the range with the Ping i500 irons. I could hit them all day, if it weren’t for that annoying guy on the range that keeps telling me his life story and talking about his swing revelations.

When it comes to feel and control, you simply can’t get better than this. The feel at impact was like BUTTER, and the sound was so muted that I could hardly tell I was hitting a golf ball at all.

The Ping i500 irons are tough to hit. As long as you know that going into it, you’ll be fine. If you are a better player, you’ll like the slim profile, great distance control, and great feel at impact. It’s worth noting that it IS a necessity to hit the center of the club face to score well.

Thankfully, this set is also a great purchase option for mid handicappers as well, not just for low handicappers. How does that make sense? Well, a set of blades is going to FORCE you to hit the center of the club face consistently. Moving from a game improvement set or players iron set to blades will be a BIG changes. However, you’ll eventually get used to it. You’ll become a better ball striker along the way, even if your scores don’t show it for a while. It’s worth it in the long run.

Compared to other blades, I noticed that these don’t dig into the ground as much as I expected. This must be due to the wides sole compared to traditional, smaller soled blades. I have a pretty upright swing, which causes large divots compared to most. However, the club bounced off the ground much easier compared to my Titleist blades, which have very small soles.

Coming in at a WHOPPING 120,000 pennies, we can’t in our right mind recommend buying the Ping i500 irons in brand new condition. A decent plan would be to wait 3+ and pick up this set when the rush and demand dies down.

An even better alternative for those impatient people out there would be to pick up a set of slightly used blades that were released 3+ years ago.  The performance will pretty much be the same, but the price tag will be drastically different.

One good alternative is the Titleist MB series. We recommend the 714 or 716 sets, as they are old enough to be a good value, but new enough to have lots of options available on the market. It’s worth noting that these are traditional blades, with thin toplines and thin soles. You can pick up a set in good condition for around $300 all day. Instant $900 savings.

Let’s Sum It Up

If you have the budget to afford new blades, by all means go for it. They will last a long time, and you can get them custom fit for your swing and your body. If you are pinched for cash, though, pick an older blade that will perform nearly the same and save you money at the same time.